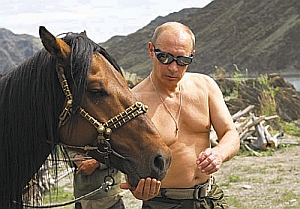 The Putin era in foreign policy began in June 1999, two months before his appointment as prime minister, when Russian commandos, arriving quick-step from Bosnia, occupied the Pristina International Airport in Kosovo. This purely symbolic act (all Russian peacekeepers were subsequently withdrawn from the Balkans) was intended to show the West that Moscow was unhappy at not being included in decision-making. Russia's shocked partners decided that this was a one-time recurrence of superpower ambitions. But the Kosovo outburst was no accident, as became clear several years later.

The first and second presidents of Russia are customarily seen as antipodes. However, as far as international relations are concerned, this is not entirely the case. Boris Yeltsin and Vladimir Putin both pursued, each in accordance with his own understanding and his own possibilities, a common goal: regaining Moscow's status as an influential participant in world politics. Moreover, for the better part of a decade Putin continued to push for integration, for turning Russia into a full-fledged participant in a Western-centric system. This was borne out by many of his major statements and steps between 2000 and 2006.

These actions and proposals were not understood or valued in accordance with their merits. It may be that the West simply didn't take Russia seriously given the scale of its internal problems, certain frightening domestic political tendencies and its less than brilliant prospects for development. Or the world's leading countries lacked the strategic foresight and ambitions necessary to perceive the possibilities.

But more importantly, it became impossible to ignore the erosion of the entire international system during that time. Given that, the actions of major nations and coalitions were aimed at bolstering their own positions - political and economic - and this did not foster cooperation.

The second half of Vladimir Putin's decade, beginning in 2006, was marked by a deepening sense of disappointment and vexation as well as a lack of faith in the possibility of coming to agreement on anything. Russia decided to develop its independent potential so as to be ready for any changes in the international situation. As a result, Russia increased its weight in the world arena and forced people to take it far more seriously. However, during this same time, the potential for foreign resistance and estrangement also grew dramatically and probably even disproportionately to Russia's new weight.

Herein lies the Putin paradox. Putin has not accomplished the goals he set for himself and the country within the first months of assuming office. This is partly his fault since he understood the norms of international communication in a particular way, and partly the fault of an adverse confluence of external circumstances. Then again, Putin did succeed in doing what he hadn't intended and what became a reaction to the failure of the original agenda. And here the credit can also be divided. Putin's personality played a role, but much had to do with fast-moving events that unfolded on the international scene at the beginning of the 21st century.

The fundamental question is, what came first? Putin's policies, which elicited a corresponding reaction abroad, or the situation abroad, which prompted the Russian leader to take this or that step? Perhaps in the future, thoughtful commentators will be able to answer this question, to abstract themselves from the personality of the main hero. At any rate, Putin doesn't look out of place against the international background of the early 21st century. Rather he embodies the general tendencies that are present everywhere, but expressed in other cases less vividly and forcefully.

Vladimir Putin is emphatically non-ideological. Then again we are seeing a general decrease in the role of ideology in politics the world over in favor of classic intergovernmental relations. Putin is reproached for reviving the old spirit of political rivalry. But his main distinction is that he is frank in his statements and straightforward in his means, and not that the rest are put off by his desire for fierce competition. Finally, Putin is accused of an excessive fondness for superficial effects and symbolic gestures. But this does not even bear commenting on given the PR and glamor technologies with which the politics of major powers are now rife.

Regardless of history's verdict, the second president of Russia cannot be separated from his turbulent times - a period in which the world was moving through a transition to a new, unknown stage.

Fyodor Lukyanov is editor-in-chief of Russia in Global Politics magazine.