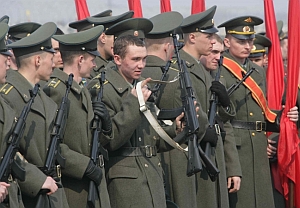 President Dmitry Medvedev has introduced a new law to parliament that would broaden the scope of Russian military intervention abroad, a signal that could further strain relationships with its neighbors. The current law allows the armed forces to take action outside Russian territory only in response to aggression that is directed toward the country and poses a threat to Russia's territorial integrity. The revised law reads: "to return or prevent aggression against another state, to protect citizens of the Russian Federation abroad, to fight piracy and to ensure the safety of the shipping industry," according to the Kremlin website.

"It is tied to the well-known events of last year," Medvedev told the Interfax news agency. The announcement has been timed to coincide with the one year anniversary of the conflict with Georgia, along with the appointment of the new Head of Military Training of the Armed Forces, Valery Yevnevich.

Some may be forgiven for thinking that these moves are meant as a warning to Russia's neighbors. Anatoly Tsiganok, head of the Center for Military Prognosis of the Institute of Political and Military Analysis, said "This law is only being introduced in order to be able to bring the military to fighting mode if Russian peacekeepers are attacked by Georgia in South Ossetia and Abkhazia, without the say of Parliament."

The revision is likely to upset the international community. "When the bill was introduced by Dmitry Medvedev, I immediately got worried calls from colleagues in Armenia, Moldova and Ukraine," Tsiganok said.

Opinion is generally divided between those who, like Tsiganok, believe that the law cannot be justified, and those who think such powers may be justified in certain circumstances. State Duma Deputy and Deputy Chairman of the Security Committee Gennady Gudkov said the law could be necessary to give the president a certain power of protection against the threats of foreign military attacks and terrorism. "The question of how we will act on the law is a question of future political situations and the relationship we have with our neighbors and other countries," he said.

Another debate surrounding the Law on Defense is that of the president's role. Many are concerned about the increasing power of the president without consulting Parliament. "When you talk about a law that would allow Russians to fight abroad, I do not think it acceptable that this right is given solely to the president. I believe the decision to use force abroad should be made only by Parliament," Tsiganok said.

There are also problems with the Russian constitution, which is vague on the procedures for responding to acts of aggression against the country. It does not seem to be clear who would be authorized to make decisions, the Parliament or the president.

Georgia and Ukraine are particularly worried about Russia's intentions, and this news will certainly increase their apprehension.

Mounting tension in the Caucasus was further intensified recently when Prime Minister Vladimir Putin, while on a trip to Abkhazia, announced plans to spend around $500 million on military bases and a border guard system in the region.

Meanwhile, Russia's problematic relationship with Ukraine was further jeopardized by Medvedev in an address to the Ukrainian President Victor Yushchenko. In his video blog, Medvedev criticized Ukrainian authorities for taking "an openly anti-Russian position in relation to the military attack on South Ossetia by Saakashvili's regime."

Medvedev repeated the accusation that weapons used to kill innocent civilians and Russian peacekeepers were Ukrainian, and said that there would not be a Russian ambassador in Kiev until the relationship between the two countries improved.