The return of Russian literature 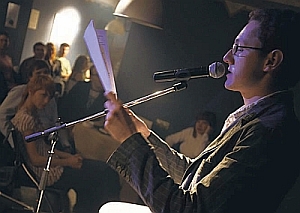 Russia is experiencing a rebirth of `literary evenings:' young authors will gather in cafes to hear each other's works.

Moscow poet Andrei Rodionov gives us a glimpse of the city's changing literary scene, where novels about Chechnya and contemporary Russia dominate.

Reading appears to be back in fashion in Russia, and sales of "highbrow" fiction are on the rise.

Following a long period of stagnation from the early 1990s through 2000, serious writers have found their way into the hearts of a broader readership. The majority of titles published between 1990 and early 2000 were those banned in the U.S.S.R. Consequently, books were short on contemporary subjects, while readers increasingly sought works reflecting their own times. Authors such as Sergey Minayev, Dmitry Bykov and Zakhar Prilepin heeded this call, producing a new type of protagonist and style.

Whereas five years ago the number of awards determined the success of literary fiction, today sales volume is considered a valid metric.

The Big Book is the most generous literary award in Russia, with 3 million rubles awarded for first prize, 1.5 million for second, and 1 million for third (roughly $100,000, $50,000 and $33,000, respectively). The award founders include Roman Abramovich and Alexander Mamut. Recently, the highest award went to Vladimir Makanin for his novel "Asan," based on the war in Chechnya. "My interest was not the Chechen war as such, but the drama of the human soul unfolding against the backdrop of war," Makanin said. The second prize went to Lyudmila Saraskina for a biography of Alexander Solzhenitsyn, while third place went to Rustam Rakhmatullin for his compilation of essays titled "Two Moscows, or Metaphysics of the Capital."

Novels about Chechnya are becoming so popular in contemporary Russian literature that they can be compared to Wild West novels and films in the U.S. Chechnya invariably provokes lively interest from both readers and critics. Perhaps this is the case because the two Chechen campaigns coincide with the dramatic period of Russia's reinvention as a new state following the collapse of the Soviet Union.

Lyudmila Saraskina's Solzhenitsyn biography was a predictable choice for second place. Russians traditionally love a good read about their illustrious compatriots. Two years ago Dmitry Bykov won the Big Book Award for a biography of Boris Pasternak, the famous Russian poet, published as part of the Life of Outstanding People series, which dates back to 1890.

But the third Big Book winner, "Two Moscows, or Metaphysics of the Capital" by Rustam Rakhmatullin, demonstrates the birth of a new tradition. Over the past decade, rapid economic growth has effaced some of Moscow's historical identity along with that of other Russian cities, and this has taken a toll on many historic and cultural features. The book takes a reminiscent look at lost pieces of the metropolitan cityscape.

Russian poets vie for the annual Poet Award, which includes a $50,000 prize and a gold medal. Moscow is giving serious consideration to designating a poet laureate, as is done in America.

This season, Inna Lisnyanskaya won the Poet Award, which was sponsored by Unified Energy Systems, a major state-controlled energy holding. In December 2008, the Russian Booker Prize was awarded to Mikhail Elizarov, who won $20,000 for "The Librarian," an intellectually intense and mystical novel with a touch of nostalgia for Soviet times: "I suddenly felt as if I had stepped into the abyss" (a line from the novel).

The work sparked fierce debate among the literary elite, all the more so because Elizarov does not belong to the literary establishment that has emerged in recent years. Nonetheless, he occupies a place in the firmament of Russian literature over the last two decades and continues the tradition of Yuriy Mamleyev and Vladimir Sorokin.

The novel, however, signals a new Russian trend; like in Rakhmatullin's "Two Moscows," the metaphysical has an equal standing with the physical, i.e. with realism. Indeed, Russia is proud of having produced some of the greatest masters of critical realism such as Tolstoy, Dostoyevsky and Turgenev, representing a school of writing that elevated Russian literature to worldwide recognition. But its mystical tradition, highlighted by the works by Gogol and Bulgakov, is also powerful. In any case, it is satisfying to look for signs of the soul and existence beyond the realm of the rational, even in a huge urban center like Moscow.