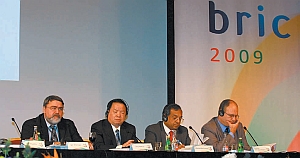 Anti-monopoly service leaders from BRIC (Brazil, Russia, India and China) have decided to join forces against the formation of cartels. They met on September 1 in Kazan at the BRIC International Competition Conference and defined the main aims of their co-operation.

The conference plenary session was opened by Russian first deputy prime minister Igor Shuvalov, who said the economic potential of BRIC countries is the most promising in the world. By 2039, these countries, home to nearly half the planet's population, will have overtaken the Big Six in economic development. However, to this end, it is imperative the BRIC countries begin work on improving anti-monopoly legislation. Although Russia's anti-monopoly legislation is now, according to Shuvalev, one of the best in the world, competition must still be defended, not only from private monopolies, but from government itself.

"If we ask entrepreneurs from any one of our countries what has the greatest effect on competition and business, they will mention first of all, not cartels and monopolies, but the abuse of office by officials," said Shuvalov. "They will mention the preferences government officials give to certain companies and enterprises. Therefore, in drafting Russian anti-monopoly legislation, we have included the opportunity to oppose such preferences. This is important for all countries counting on fast growth in the post-crisis world - especially the BRIC countries, which have developed in the past as a result of government efforts." This is why Federal Anti-Monopoly Services in Russia are actively working in a comparatively new direction, fighting preferences on the part of state officials. To this end, for example, the second package of anti-monopoly laws has stiffened punishment: fines have been instituted and even a disqualification of up to three years. As before, anti-monopolists consider the fight against cartels a priority.

Shuvalov also addressed complaints about the Big Six, which do not always play according to the rules and whose markets are not sufficiently open for BRIC goods. "On the world market, competition is often organised by protectionism of various countries, including WTO leaders," said Shuvalov. "The food markets, for instance, of countries like Japan, the United States and European Union members have been closed in recent years. India and China are not able to promote agricultural production, which hinders economic growth."

During the Kazan meeting, representatives of BRIC competition services formed working groups to study different problems, including the formation of cartels.

According to Federal Anti-Monopoly Service chief Igor Artemyev, BRIC country anti-monopolists have agreed to exchange information about international-scale price fixing. Another group will study state purchases. Russia's BRIC partners are ready to use Russian experience in introducing electronic auctions. All BRIC members agreed that such auctions represent not only a real step forward in the fight against corruption but an enormous economy of government means. On the eve of the conference, this new package of anti-monopoly laws came into effect in Russia.

Based on materials of Rossiyskaya Gazeta