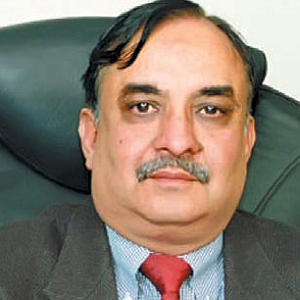 Shreyans Kumar Jain, head of the Nuclear Power Corporation of India Ltd (NPCIL), has spoken about the construction progress on the Kudankulam nuclear power plant, being built on a Russian design, and about his company's plans to expand cooperation with Russia.

A group of Russian and Indian experts have just concluded a meeting at the Kudankulam Power Plant construction site to review progress. What is the status of the construction and when is the launch of Unit 1 expected?

Lots of work has been done at the site - electrical systems have been commissioned and a desalination plant, a demineralised water plant and other auxiliary systems have reached the advanced stage of commissioning.

Still, we have not met an earlier target: in January 2008, it was decided to load fuel in December 2009. All materials from the Russian Federation will be supplied. However, there are 600 tons of piping, as well as instruments, joints and other items due to be shipped last year that we are still waiting for. These are coming in November, and some materials will arrive only in the first quarter of 2010.

India and Russia have reached an agreement on construction of an additional four reactors in Kudankulam. At the same time, India is keen to produce many components locally. When do you expect to sign the commercial contract and begin actual work?

We have completed levelling and grading and are ready to start excavation. We have received a techno-commercial offer from Atomstroyexport. We have gone through it. To take care of localisation, we have given them our own proposal.

We are building our own plants and components except for the nuclear reactor, steam supply system and turbine generator, which have to come from Russia for Unit 3 and 4, but the rest is available in our country. A big team of our Russian friends have come, seen all these facilities and are satisfied.

In the interest of the project (the time and money points of view), detailed proposals have been given to Atomstroyexport, for which negotiation is expected to start by late August or early September. It is our desire that sometime in December, or early next year, we shall start ground breakup for Units 3 and 4.

What sites for the construction of new nuclear power plants, including with possible Russian and American participation, have been identified as suitable?

There is a basket of suitable sites. Large reactors can be located at coastal locations only from the point of view of availability of cooling water and easy transportation of large equipment - it is easier through sea routes. We have 4,000 km of coast in India - from Saurashtra to West Bengal - so there are many places in our country for further expansion.

The government of India has selected the best sites available. There are no restrictions from the safety perspective - at one site, eight reactors can be set up. The north east, West Bengal and other regions are is slightly earthquake-prone, but it does not mean that reactors cannot be designed for these locations. It is still better than Japan.

Out of four sites identified so far, one is assigned for the Russian Federation. One - Kudankulam - is already under construction, and now two extra reactors have been approved. Very soon there will be approval for an extension of up to six reactors.

A site in Jaitapur has been assigned for France, and two for American companies, though these are not yet declared.
The 11th Five Year Plan envisages construction of 10 nuclear reactors in India during 2007-2012. Are these plans actual and where are these reactors expected to be built?

The Five Year Programme was drafted and finalised in 2005-2006. At that time, it was expected that initiatives by America and the Russian Federation in terms of intergovernmental agreements and IAEA support for the initiative would have been be complete in one year. But it took almost three years and was signed in 2008. So, for the first two years of the Five Year Programme from April 2007, no progress could be made, and only now has that deck been cleared.

We expected, at one time, that all of them would be launched and some would be operational. Now, we will start serious work on some, and on others we will be engaged in pre-project activity and XI Plans (2007-2012).

According to international obligations, India can use this fuel only for IAEA safeguarded reactors. How is the verification process going?

Fuel has been fabricated and loaded under IAEA inspection into Rajasthan 2. We hope Rajasthan 2 will start power production next month.

We have now six reactors under safeguards: Rajasthan 1 and 2, Tarapur 1 and 2, and Kudankulam 1 and 2. In addition to these two reactors, there is a proposal to safeguard eight more reactors: Rajasthan 3, 4, 5 and 6; Kakkrapar 1 and 2; Narora 1 and 2.

Of all those six, only Rajasthan 1 and 2 use imported fuel. Five and 6 are expected to be notified and commissioned this year, with clearance to come in next two to three months.

What can result from the visit of an Indian delegation to Russian nuclear fuel facilities in Novosibirsk and Angarsk?

I was part of a former delegation, which explored areas of co-operation in various sectors. There is one more intergovernmental agreement under negotiation with Russia to expand the peaceful use of nuclear power, to include many other areas of research and development.

Is NPCIL looking to procure foreign uranium mines given the deficit of this fuel in India? Is any of plans in advanced stage?

We want a guaranteed fuel supply for 60 year to a plant. One method to get this assurance - to have some uranium mines, which can earmark the supply. We can have some share either in new mines or existing mines to have some say and this effort is going on. As of today only exploratory talk are going on.

Shreyans Kumar Jain is Chairman and Managing Director of the Nuclear Power Corporation of India Limited, a public sector enterprise under the Department of Atomic Energy.