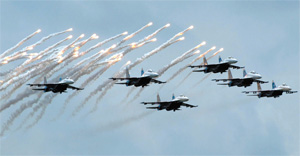 The latest International Aerospace Show (MAKS) took place in the town of Zhukovsky, near Moscow, in late August. Judging by the number of contracts signed by the military wing of Russia's United Aircraft Corporation (UAC), India is still a key partner for Russia in the arms market.

In recent years, Russia has been merging its design centres and its volume aircraft production facilities, which were separated and functioning independently after the collapse of the USSR, into the UAC. The current world crisis caught the industry at a point where it was especially vulnerable. The process of consolidating the various companies is virtually complete, but the corporation has not yet managed to reach full working capacity as a single entity. Some of the companies that were incorporated in it had debts and needed a boost to their financial health. Without government help, it would have been practically impossible to pull them out of the financial hole they were in.

Since 2004, said Putin at the opening of the air show, the government has brought a fourfold increase in assistance to the aerospace industry. In 2009 alone the industry received about 80 bn roubles from the state budget: the money was used to increase the capital available to businesses run by the United Aircraft Corporation and also to upgrade production facilities. The Prime Minister gave an assurance that the industry would not be left without government support at a time of crisis: "We intend to continue to put serious investment and resources into the aerospace industry, to create truly competitive companies, businesses that are capable of winning their own niche in the market, and to generate and attract resources for modernisation and re-equipment." Now all that's left is to sort out the matter of its debts - the government puts them at 120 bn roubles. The corporation's senior management has been given time until October to work out how to get their businesses out of debt.

Russian aircraft builders, especially in the military sector, have every reason to be optimistic. The biggest deal at the air show was done by the Russian Defence Ministry and the Sukhoi company, one of the key businesses in the UAC. In the period up to 2015 the Russian air force will take delivery of 64 new fighters made by this company - four Su-30s, 12 Su-27s and 48 Su-35s. The contract runs to 80 bn roubles - approximately one quarter of the total value of deals concluded at MAKS. And that's not all as far as the Russian air force is concerned. According to Alexander Zelin, commander-in-chief of the air force, another major purchase may be announced by the end of the year - this time the MiG-35 multi-purpose fighter.

This is the machine that Russia is offering in one of today's main tenders for the supply of a large consignment of fighters, which was announced by India in 2007. The Indian air force is planning to buy 126 aircraft. All the world's leading arms manufacturers are fighting for this giant contract: the USA's Boeing and Lockheed Martin have put forward the F-18 and F-16 respectively, France's Dassault the Rafale, EADS the Eurofighter Typhoon, and Sweden's SAAB the Gripen NG. And there's plenty to fight for: the contract is worth $12 bn. India recently began the lengthy process of testing the aircraft taking part in the contest, starting with the Americans. The winner will be announced in 2010, and delivery of the first aircraft under this contract should begin two years later.

Alexander Mikheyev, deputy chief of the state defence export agency Rosobronexport, believes Russia has a good chance of winning the contract. MiG aircrafts are known to Indian pilots, since they are the core of the country's air force combat aircraft fleet.

Moreover, over almost 50 years of military technical co-operation with Russia, India has developed expertise in maintaining Russian aircraft. Also, Russia is just about the only country to transfer its technology to India - various armaments are manufactured there under licence. The current tender also envisages the same set-up regarding co-operation with the supplier, and Russia's relevant experience may give it an advantage. None of this means, of course, that the tender is virtually in MiG's pocket. India is aiming to establish a closer relationship with Russia's main competitor in the arms market - the USA. In July the new American administration signed an agreement with India on co-operation in the field of military equipment. Secretary of State Hillary Clinton visited India especially for this. Now the Americans are expecting India's Prime Minister Manmohan Singh on a return visit in November, when he will have talks with President Barack Obama.

All the same, Russia is still India's main arms supplier. And for Russia, India is still a strategic partner in the field of military equipment and one of its main customers. The recent MAKS confirmed this once again. Joint work by Russia and India on the creation of a fifth-generation fighter continues. Alexander Zelin, Russia's air force commander-in-chief, said ground tests of the aircraft are already underway in Moscow. It is expected that the aircraft will take off for flight tests in November-December 2009, and it is due to come into service with the Russian air force by 2015.

Agreements made under earlier Russian-Indian contracts are also being fulfilled. Oleg Demchenko, head of the Irkut company, reported that the latest batch of 18 Su-30MKI fighters has been delivered to India. By 2015 India will have 230 of these aircraft. Moreover, Rosoboronexport announced at the air show in Zhukovsky that before the end of this year Russia and India may be signing an agreement on fitting these aircraft with the Russian-Indian BrahMos supersonic cruise missile, the air-launched version of which is currently being developed.

Air show results
More then 700 companies from 34 countries, including 436 Russian firms, took part in the air show
Contracts totalling $10 bn were signed at MAKS-2009
Russia's Defense Ministry and the Sukhoi aircraft maker signed a $2.5 bn contract on the delivery of 48 Su-35S, 12 Su-27SM and four Su-30M2 fighter jets to the Russian Air Force

Sukhoi Superjet 100 airliner ready to take off
Engines for Russia's new Superjet 100 regional airliner will be certified later in 2009, a senior official at the PowerJet company announced at the MAKS-2009 air show.
PowerJet, a joint venture by France's Snecma and Russia's NPO Saturn, has designed the SaM146 engine for the Superjet, a family of medium-haul passenger aircraft developed by Russia's Sukhoi Civil Aircraft company in co-operation with a number of US and European aircraft makers. The company started the SaM146 engine certification programme in February 2009 and plans to run certification tests in line with European, the US and Russian standards, which would allow the plane to operate without restrictions anywhere in the world.
According to Vladimir Prisazhnyuk, president of Sukhoi Civil Aircraft, the first 18 Superjet 100s are expected to be delivered to customers, including Aeroflot and Armavia, in 2010.
Sukhoi plans to manufacture at least 700 Superjet 100s.