Fathers and sons: the Russian version 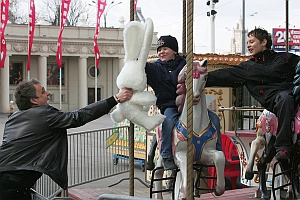 The top news, judging by television and press reports, is who will get little Deni. Let me explain. Deni is no ordinary 11-year-old boy. He is the son of a famous singer, but, far more important, he is the grandson of the Most Famous Singer in Russia, who celebrated her sixtieth birthday this spring on a truly national scale, complete with congratulations from Putin and Medvedev.
Deni was recently abducted by his father, also no ordinary fellow, but a famous Chechen businessman worth an estimated $200 million. The father - who for eleven years resigned himself to the fact that his son lived apart from him - maintains he doesn't want his son to be sent away to school in America. His grudge against the USA is entirely personal: Washington won't give him a visa. (As they say in Russia: he'd love to go to heaven, but his sins won't let him.) As a result, the father, who had his son over the summer vacation, did not return Deni to his mother and will not even let her see him.

Meanwhile, the mother has turned to public opinion for support. For the second week running the whole family is on television all the time talking about Deni. First came the mother's press conference, then the father's. Then Deni himself was brought out to meet the press. With his father looking on, he said that he wanted to live with him. Then the father's older daughter from a former marriage commented with the cameras rolling. Finally, the heaviest artillery of all entered the fray: the grandmother, the Most Famous Singer in Russia a.k.a. Alla Pugacheva. On a popular TV show the other day, she compared her former son-in-law to a terrorist, which, considering his Chechen origins, sounds almost like an indictment.

The whole country is glued to the tube. Russians have forgotten about the financial crisis - who has time for that in the midst of all this drama? My girlfriend's hairdresser says she hasn't slept in two nights: she keeps dreaming about the Most Famous Singer in Russia who keeps crying on her shoulder while the hairdresser keeps trying to comfort her. What sleep?

But why, you ask, can't all these unhappy people resolve their family problems in the usual civilized way - through the courts? That's the most interesting part. This situation, for all its absurdity, has exposed a very serious problem. If you analyze the stories in the press, you come to a surprising conclusion. All the journalists writing about this scandal have taken sides according to their gender: the girls support the mother, the boys the father. Male and female solidarity have nothing to do with it. It's just that any Russian man who is a father or planning to become one knows that in case of divorce the mother will get custody. Russian courts do not decide these cases any other way. And this is not a journalist's exaggeration but the opinion a famous attorney, Igor Trunov, head of the Moscow Lawyers' Presidium.

Of course, in the Russian Family Code it says that parents are equal before the law and the mother has no special advantages. But in practice the reverse is true. Regardless of the father's financial situation and reputation, child custody is always awarded to the mother. This situation allows the mother to dictate conditions to her former husband: if you're good, I'll let you see your child.

It's hard to resist the temptation of moral and material blackmail when you're 100% sure that the law will always be on your side. Some think this is because most judges are women. Others dig deeper and remember Russian history, when as a result of wars, revolutions and the high mortality among men because of alcohol and crime, more than one generation was raised by single mothers.

On an unconscious level Russian society seems to feel that children can be entrusted only to women. That means men can run the country (the Russian government is 90% male), but they can't raise children? It's not surprising that fathers who don't want to lose their children because of divorce sometimes do crazy things: they abduct their children, hide them from their mothers, calculating that while the law takes its dilatory course the children will grow up with them. Since the 1990s Russia has had a human rights organization called Fathers and Sons to defend the right of fathers to raise their own children. But only now has this problem surfaced in the media, thanks to the huge scandal in this famous family. Little Deni, without suspecting as much, may catalyze the search for a solution to this impasse in Russian law. True, you can't help but feel sorry for him - you just have to hope they don't tear him in half.