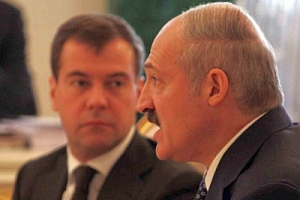 Both Stanislav Shushkevich, head of the Byelorussian Supreme Soviet, and Boris Yeltsin regarded their political views (then formally "democratic") as an instrument for the dismantling of the Soviet State system. The political and economic processes that occurred in Belarus in subsequent years showed that the citizens of that country had their own views of relations between Belarus and Russia. These views are, of course, pro-Russian, as distinct from those of an extremely insignificant part of the political class oriented towards the West. It's fair to ask: why is this so?

First of all, Byelorussians and Belarus are closer to Russians and Russia that to anyone else.

Secondly, our historical memory has not been overshadowed by conflicts - military, assimilative or any other kind. On arriving in Brest or Mogilev, a Russian begins using "a" in place of "o" in conversation. A Byelorussian in Moscow adapts to "Moscow" language. I should note that a Russian from Astrakhan has as much trouble understanding a Russian from Arkhangelsk as a Byelorussian does a Russian.

Thirdly, we share memories of many wars that went through Belarus to arrive in Moscow. From Napoleon to Hitler the direct route to Moscow went through Minsk, Mogilev and Smolensk. And this route was never easy for the aggressors. During the Second World War in Byelorussia every fourth man died, and this is our common historical memory. This is why in both western and eastern Byelorussia May 9 is the most important holiday.

Fourthly, on 8 December 1999 Russia and Belarus signed the Treaty on the Union State, legally removing the obstacles in the path to creating a single country. (The problems implementing this Treaty will be discussed later.)

What creates difficulties in our relations and how surmountable are they?

"Existing trade barriers are the only problem in relations between Belarus and Russia," said President of Belarus Alexander Lukashenko on 19 September 2009. It is hard to agree with this. Difficulties in Russian-Byelorussian relations have accumulated over the years. Even if the Customs Union of Belarus, Russia and Kazakhstan begins operation in 2010, it will still require adjustments as a new structure and the problems of mutual protectionism will not disappear overnight.

The main problem is in economics - the difference in models for economic development. The state sector of the economy of Belarus is far more developed. Major industrial enterprises built in the USSR were not privatized in the Russian manner; some were turned into joint-stock companies at the national level while others remained state property. Private capital determines the development of medium and small industry and the service sector. Personal holdings in the countryside play a large role.

Belarus actively supports its national industries, major exporters and agriculture. Lukashenko expressed the dominant view among members of the political class when he said: "At the beginning of the state program to revive and develop the countryside, when major private capital had yet to be created and attracted to the agrarian sector, our state was obliged to assume the role of strategic investor and economic manager." These words may be seen as relating to industry as well. Over the course of a decade, up until the financial crisis of 2008, Russia's leaders had a more restrained attitude toward state support and foreign-trade protectionism. In a Union State, naturally, two such different economic policies cannot coexist.

The second problem, known in Russia since its baptism, is bureaucratization. Any political decision is implemented with a delaying mechanism and administrative correctives. Unfortunately, the Union State lacks outstanding and effective managers, at the same time it possesses a large and not always effective bureaucracy.

A third aspect is the pessimism of experts. Until now, at the expert level, we have often interpreted the current state of Russian-Byelorussian relations as a process begun by the president of Russia in Belavezhskaya Pushcha in December 1991. In this case, the question arises: did it make sense for our republics to separate only to spend the next 18 years trying to integrate with varying degrees of success? After many years we have arrived at political relations roughly on the model of those between the United States and Canada. The question arises: is this the limit of integration?

Fourthly, the years of independence have led Belarus to form a firm power vertical, a smooth-running system of relations between the powers that be and the economy. Moreover, some of the people who have come to power see the question of integration with Russia as secondary. The criterion for the evaluation of this or that situation is the degree to which it preserves the freedom of Minsk's political and economic conduct abroad, given a certain consideration of the position of Moscow, its largest partner in economics and politics.

Influential moderate isolationists consider that Belarus must strengthen its sovereignty, must come into its own as an independent state with its own national and geopolitical interests. At the same time, it is natural that internal policy should have a clear European vector in addition to the Russian one. In future, they do not exclude the possibility of deepening these relations, but they prefer to see their country as a strong negotiator.

Finally, and most important of all, a policy in accordance with the specifics of professional activity may seriously influence relations between our peoples. But in our case, it will be almost impossible for politicians to do this. The peoples of Russia and Belarus are the best guarantee of our friendship, economic cooperation, and political integration.