The hidden past inside the secret cities 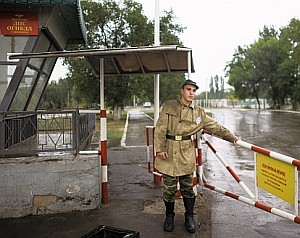 Checkpoint at the entrance to the closed city of Znamensk in Russia's southern Astrakhan region. Few foreigners have been to such cities

Cold War relics, Russia's 45 closed cities continue their proud military traditions facing an uncertain future. How will they adapt to new economic realities?
To walk the autumnal streets of Znamensk, trimmed with roses, asters and chrysanthemums, tourists need a special permit. The only other way into a closed city - unofficially, that is - is to avoid the checkpoint and walk in through one of the holes in the nine-kilometre-long wall surrounding the city. Only 33,000 people live on this otherwise deserted steppe southeast of Moscow. The holes in the wall, and rumours that ongoing reform might one day open their city, do not please the citizens of Znamensk: for many, the lock on the gate and secretiveness of their hometown is not a Soviet relic, but the meaning and pride of their lives.

Russians first heard officially in 1986 that there were dozens of closed cities and towns all over the country with more than one million people living in them. The cities had mysterious numbers attached to their names: Arzamas-16 (the home of the nuclear engineers who put an end to America's nuclear monopoly), Krasnoyarsk-26, Tomsk-7, and others that sound like sci-fi thriller titles.

Closed cities remained a dark secret for most Russians: only now, as the government tries to reckon with their future, are we learning about them.

For decades, the people of these cities lived in a kind of prestigious internal exile: they had foreign food, special privileges and better schools. Now, some 10 years after they began their economic and social slide, many inhabitants of the beleaguered strategic military centres still want to live in exile, especially since the government started pumping in oil money - in the case of Znamensk, to the tune of $25m per annum.

In Soviet times, all sorts of tricks were used to hide the cities in plain daylight; today the "post boxes" - so called for the addresses residents used to receive mail - are in epic transition. Znamensk residents make holes in the wall for a shortcut to their dachas, but the porous borders have brought new realities well known to the rest of the country. Recently, local kids started taking their fights outside the wall: when one person died and several were wounded, officials became concerned about the holes and put doors in some of them. To obtain an entry permit, visitors must be invited by a friend or relative; foreigners and journalists, if allowed to visit, are accompanied by guards wherever they go.

The process of modernisation is still nascent. The economy of the city depends on one industry - missiles and missile testing on a moonscape of steppe about 20 miles from the town centre. "The wall is not to make us close-minded, or isolated, but to provide us with a special status," says mayor Victor Likh. "Since Kapustin Yar is the country's major range for testing ballistic missiles and anti-aircraft systems, the government is paying 80pc of the city budget, which is now 1bn roubles - the biggest budget for a population of 33,000 in the entire Russian south."

However, when the Soviet Union fell apart, the government stopped almost entirely the financing of Kapustin Yar, and more than 40 other closed cities. In despair, dozens of officers' families fled, abandoning their apartments, which fell into disrepair. Privatisation was not allowed. "Ten years ago, I could not even dream of registering a company," says Alexander Volchkov, the owner of the biggest construction company in Znamensk. In the last four years, Volchkov's company has built three multiple-storey buildings and almost completed the construction of a modern water filtering system for the city. Mikhail Avrashuk's property company renovates the abandoned apartments and sells them.

An association of politicians and officials regularly meets in Moscow to decide which cities will remain closed and which will eventually be opened. There are currently 45 closed cities: it has been decided to open six of them. "With the military reform transforming the Russian army and the market economy booming, it is inevitable that most of these cities will open up," says Alexander Golts, an independent military analyst. Such programmes as the US Cooperative Threat Reduction Programme and the British Closed Nuclear Cities Partnership are helping Russia and the West to open some of the doors and reduce secrecy. But it is clear that Russia will always have a few closed cities left - and Znamensk might be one of them.

"Under constant threat of terrorism, the world will be moving towards deeper secrecy," Sergey Markov, a Duma deputy, says. "As long as Russia remains the target of aggression, we will need to test our rockets and keep the tests behind the wall to provide secrecy."

Not everyone is happy in exile: most of Znamensk's graduates prefer to leave. "We live here under a magnifying glass - every step to the left or right is noticed and discussed. My friends and I plan to move to Moscow right after graduation. At least I will see people from other countries there," says Olga Sibiyato, an 11th-grader at High School No 235.

A year ago, a few American and German specialists stayed in Znamensk for a month. They came to launch six small satellites from the Voskhod space-rocket complex. A few Egyptian, Brazilian and some "Arab" clients (officials prefer not to identify from which country) came last month to see the test of a new missile, the Tor-M2E. And that was basically all foreign visitors in the past year.

As the sun sinks in the sky, soldiers and officers line up for their evening march. The songs they sing, "Katyusha" and "The Soldier Is Walking in the City", drift over the town and signal the day is coming to its end.

Aleksei Prudnikov is the commander of the anti-terror unit at Znamensk military range. "We are rocket specialists, the elite of the Russian army," he says. "Thousand of missiles have gone through our hands... If not us, then who is going to keep Russia safe?"