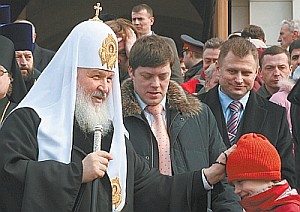 Patriarch Kirill, in his job for less than a year, is encouraging the Church to engage with all parts of society

The search for an identity that began after the collapse of Communism remains a critical question for Russians. The Orthodox Church is the only institution that unites Russians with their "near abroad" and has survived throughout the country's long history. Today, the state needs the church much more than vice-versa.

When foreigners convert to Orthodoxy, more often than not it is because they are impressed by the splendour and majesty of Russian liturgy.

They appreciate that strict Orthodox priests do not connive at human weaknesses or play up to the individual, accustomed to indulgence. They are attracted by the centuries-old spiritual tradition, which is inevitably conservative and inflexible but all the stronger for that.

It stands in stark contrast to the "flexibility" of Western Churches adapting to changing circumstances, which in many ways has left them today in a "social ghetto".

The Russian faith, like the Russian revolution and like life in Russia itself, never condescends to the individual.

In the 20 years since the collapse of the Soviet system, the Russian Church has been rebuilt from ruins inhabited by shuffling old women and somewhat eccentric zealots into the most powerful body on the post-Soviet stage. No other Russian social institution has experienced such a rising from the ashes. And no other country has seen such an obvious revival of faith as has occurred in Russia.

Just recently the Kursk Root icon, one of the most revered Russian icons - the icon of "Russian émigrés" - returned to Russia for a few days for the first time since 1920. After the 1917 revolution it was taken out of Russia and became the main sacred object of the Russian Orthodox Church Abroad (ROCA, Church of Russian émigrés).

After many years of effort by the Moscow Patriarchate and active work with their compatriots, in May 2007 the Russian Orthodox Church and the ROCA were reunited.

Since then, Russian relics have travelled to the flock outside Russia, and then finally Russian people in Russia too could see the great sacred object.

People are willing to queue up for two to three hours to reverently cross themselves, fall to their knees, kiss the icon and leave.

God knows why people need to do this in these days when everyone seems to be driven by fierce competition and the motto "time is money".

It is not the Church which has sought union with the state in recent years. Rather it is the state that has been eager to demonstrate its loyalty to the Church - and perhaps to seek its counsel.

It turned out that after the collapse of the Soviet Union only one institution - the Church - had ideas, understanding of what was happening and vision.

Russia is in search of its identity. It needs to re-establish key reference points that were lost in the Soviet period. And the Church, while not calling for the past to be restored, relies on traditional values that underpinned the life of Russian people for centuries, whether they were Christians, Muslims or adherents of other faiths.

When Patriarch Kirill is addressing believers he often uses the concept of Holy Russia. This is not simply a historical reference. Today the Church is the only thing that binds together the peoples of Russia, Ukraine, Belarus and Moldova, as well as a number of other countries, despite their conflicts and squabbles - the only thing that makes them feel they are a single and indissoluble whole, a part of that spiritual and cultural space which is Russian Orthodox civilisation.

The Patriarch's active stance on the post-Soviet scene is not Great Power nostalgia; it underlines his devotion to the common identity of Orthodoxy, which has no national or state borders.

During Patriarch Kirill's recent visit to Ukraine, in the western part of the country, which is not considered to be within the Russian Orthodox Church's area of influence, he was met by tens of thousands of believers.

When his addresses were broadcast on Ukrainian television, they were watched by about 30pc of the country's viewers - an absolute record. It is obvious that for the majority of believers in Ukraine, the Moscow Patriarch is the spiritual leader whom they receive as head of their church.

At the same time, the Russian Church has refused as a matter of principle to extend its jurisdiction to the territories of Abkhazia and South Ossetia, which were recognised as independent states by Russia.

It made its position quite clear: the fact Russia has recognised them as independent states does not mean they have ceased to be the canonical territory of the Georgian Orthodox Church.

It is difficult for the state not to take into consideration the results of Russian opinion polls and even those conducted by the Gallup Organisation (USA), which show more than two thirds of people support the idea of religious education at schools and chaplaincies in the army.

There are more people in the Church than in the powerful corporations.

True, the majority of believers are not well-off: in fact, most of them are rather poor.

The Russian Church reveres the beauty of the church building and the majesty of the service. That's why you are more likely to see a church as pretty as a picture surrounded by ramshackle hovels than a crooked little church next to the fine villas of the nouveaux riches.

The crisis has wiped out worldly riches. Yesterday's moneybags do not know how to live in simplicity and fear prison, ruin and destitution.

The Church has priceless experience. It has seen not only luxury, the golden decorations and rich brocade of bishops, but also ditches, executions, martyrdom and total destruction. The Church has emerged from this desecration even more powerful.

So why should it seek favours from the state which so often seems to live in a state of confusion?