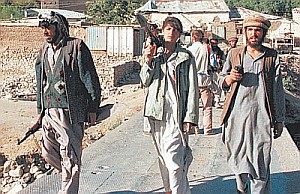 Most Afghans remain absolutely indifferent toward both Communism and Western democracy

When I was invited to dine with the British Embassyґs minister plenipotentiary in Moscow, I was surprised. Why would a British diplomat want to see me? His assistant explained: "Sir Sherard Cowper-Coles, our special representative in Afghanistan, is visiting Russia. Weґre inviting you as an expert on Afghan affairs."
The evening, held at Smolensky embankment apartments overlooking the Moscow river, turned out to be pleasant. There was an interesting group of guests around the table: Britons, a Nato representative, American and Canadian diplomats, a Russian colonel and an orientalist. Our hosts did not conceal their interest. "Tell us," they said, "how you managed to organise things in such a way that Najibullah remained in power for more than three years even after Soviet forces left the country."

This is indeed important, if the alliance countries really wish to leave Afghanistan.

It is my profound conviction that he would have remained even longer, but, alas, then-president Boris Yeltsin, under pressure from his entourage, cut off military aid to Kabul. Najibullah, who by that time had long rejected Soviet ideological dogma and proclaimed a policy of national reconciliation, was ready to make very bold compromises with the armed opposition and became hostage to the euphoria which then prevailed in the Kremlin. As a result, this euphoria not only cost Russia dear: todayґs problems on the other side of the Panj river are also, to a large extent, a consequence of the lack of foresight on the part of the people around Yeltsin.

The moral of the story is that it is essential not to leave Afghanistan unsupervised and unprotected. If the Western countries are seriously thinking about withdrawing, they will still have to bear the burden of Afghan issues for a long time to come, if not forever.

Sir Sherard used to be ambassador in Kabul, and it seems he has a good understanding of Afghan affairs. With his gentle and self-deprecating British humour, he coped very well with the role of hosting this "shirtsleeves" meeting and gave everyone the opportunity to speak freely. The Russians spoke, according to experience, about the way things work in Afghanistan; the Western diplomats talked about how they see the way out of the present deadlock.

They said, for example, that it had been decided to place more emphasis on working with the Pashtun tribes; that the alliance would start taking a more serious approach to organising the Afghan armed forces in the hope Afghans themselves will take on the main role in fighting the Taliban. They talked about the importance of strengthening central government authority and expanding the basis of national agreement.

At one moment I really wanted to shake my head: was all this a dream? It was like I was being magically transported a quarter of a century back in time. I swear to God, our diplomats and advisers were saying the same things in the mid-80s about the tribes, the Afghan army and strengthening government. So here is the answer to how Najibullah and his supporters held on to power: because they didnґt just talk, but from a certain point in time they actively put into action the ideas that had been painfully conceived in the offices of the Communist Party Central Committee, the KGB and the Foreign Ministry.

Of course, someone might retort that there is a big difference: the Soviets were trying to implant Communist ideology by force, whereas the West is now sowing seeds of true democracy. But I have my own answer: the overwhelming majority of Afghans are absolutely indifferent - both to Communism and to the values of Western democracy - and reject any foreign interference. No one should be deceived. Nato is only tolerated because, along with guns, its people are bringing bread and dollars.

It's a big mistake to think Nato is fighting terrorists in Afghanistan. The Taliban is an ideology that thousand of Afghans sympathise with, covertly or overtly. Thatґs why, like 25 years ago, a military solution to this problem doesnґt exist. Only 25 years ago, when my compatriots were fulfilling their "international mission", the "enemies" were called Mujahideen instead of Taliban.