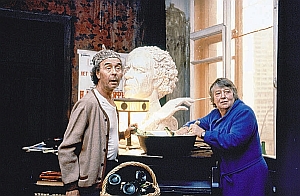 For years, Oleg Dorman could not sell his documentary on the epic life of Lilianna Lungina, a popular Russian Jewish translator who bore witness to Lubyanka, Stalin and the Thaw. Today, "Translation" is a TV hit on Rossiya, but only after novelist Boris Akunin intervened on Dorman's behalf.
Oleg Dorman's "Translation" could not be any more different from the standard fare of game shows, celebrity ice dancing and detective shows that you see on prime-time Russian television.

An eight-hour documentary, it consists of an elderly woman telling the story of her life and has gripped the nation's viewers.

Split into 15 parts and shown over four days earlier this year, "Translation" features Lilianna Lungina, who translated works by August Strindberg, Henrik Ibsen and, most famously, Astrid Lindgren, telling of a life that experienced some of the most dramatic events of the 20th century, from the Stalinist purges and World War II to the Khrushchev thaw.

None of this sounds like the usual type of programming for the state-run Rossiya channel and the documentary, filmed in 1998, just before Lungina's death, was initially turned down by all the networks.

"The only response that I heard for the last 11 years was, "Watched it at home, loved it, but the general audience won't watch it," Dorman said in a telephone interview.

It took the intervention of author Boris Akunin and broadcaster Leonid Parfyonov to get the program aired.

"Parfyonov spoke to the head of Rossiya and a miracle happened - the head of the channel became fascinated by Lilia's story," he said.

Lungina was a Russian Jew who spent her childhood in Germany, France and Palestine, before moving to the U.S.S.R. in 1933.

Raised as a "real French mademoiselle," she was horrified when she arrived in the Soviet Union and was among peers who lived and thought according to official state rules.

"The shot of the freedom of speech and thought that I absorbed during my foreign childhood made me inoculated against Soviet thought. I experienced an abrupt feeling of rejection for that system," Lungina says in the film.

She was expelled from the Komsomol for saying it was absurd to arrest children for not informing on their parents for "crimes against the state." It was then that she realized truth did not exist in her new land.

The horror of Stalin's oppression is the most dreadful memory in Lungina's story. As a student, she was brought to Lubyanka to be interrogated about her school's professors, students and communal apartment neighbors.

"The visit to Lubyanka left an imprint on my mind for the rest of my life: rows of doors without signs, 25-26-year-old agents, all with the same white, emotionless faces. As I spoke to the interrogator, I considered every word that came out of my mouth so as not to give away the fact we weren't following the Soviet doctrine during our studies, that our professors taught us Western arts," Lungina said. "When they let me out of the interrogation room and I took the elevator to the exit, I saw that Lubyanka had 8-10 floors underground, which nobody knew about. This made a terrible impression on me and I felt drunk with relief when I finally got out onto the street."

Lungina was asked to become an informant for the K.G.B. but she declined.

Dorman said it was this sense of morality that made the film so important.

"Human existence would have ended a long time ago, had it not been for people like Lilia, who exist in every young generation: The people of principle, of high moral standards, who will not sacrifice their beliefs for anything." Dorman said. "Lilia's identity will impact the youth who watch "Translation" due to her amazing capacity to combine toughness of character with the softness of soul."

Lungina is unsparing when dealing with people who have gone against her principles. She talks with visible hatred of Kornely Zelinsky, a journalist whose harsh reviews of poet Marina Tsvetayeva prevented her getting published and, Lungina says, helped push her to suicide.

Of Stalin and the mass grief that gripped the nation when he died, she said "Four hundred or something people were trampled [to death] during Stalin's funeral, as if thousands of those he had killed during his lifetime weren't enough, he just had to take away more."

As a Jew, Lungina was limited in where she could work. But it was her translation of Lindgren's "Karlsson on the Roof" that became a children's favorite and helped her break though.

"In the early 1960s I was desperate to start working and thought that I would find a job at the Russian State Publishing House. But they had a quota for the Jews who could work there, which was already surpassed," she said. "The translation of `Karlsson on the Roof' had a major impact on my career. After its publication, my name became recognizable - people started closing their eyes on the Jewish factor," she said.

Despite all the hardships, Lungina's advice for the young generation in "Translation" is that, "events in my life that at first appeared as the biggest disaster in the long run often led to remarkable happiness."

If she had not returned to the Soviet Union, Lungina probably never would have met her husband Semyon Lungin, who "surrounded her with a cloud of love and made their life together an eternal feeling of joy despite moments of penniless desperation."

Most of all, the series entrances viewers with the magnetic quality of a woman speaking about her whole life, a difficult, brave and moral life.

"The process of voicing one's thoughts is a rare talent nowadays - this ability is not needed in the contemporary world," Dorman said. "The complexity of oral speech, the fact that what is said cannot be erased, gives birth to a special kind of inspiration and a special contact between the speaker and the listener. This is the way Homer's `Iliad' was born."

The response to the series has been so positive that a book of the documentary will be on sale later this month.

This article was initially published in The Moscow Times