No past, just the future (video) 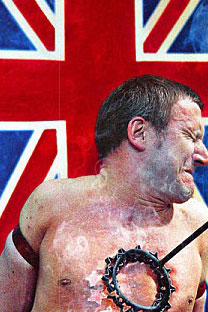 Oleg Kulik (above) first became famous as a "human dog" in the early 1990s. He was the founder of an art genre that featured human bodily suffering

Those seeking a comprehensive sign of how much Russian art has changed since the collapse of the USSR need only look at Oleg Kulik's grizzled chest-length beard. Kulik is best known for his Nineties series of "human dog" performances, which saw him travel around the world naked, "escaping" from a leash, ferociously biting people and defecating in museums.

Many interpreted Kulik's performances as a metaphor for Russia itself: naked, poor, something to be feared, a product of the unbridgeable conflict between West and wild East. This year, however, he staged a "spatial liturgy" for a Monteverdi opera at Paris's Theatre de Chatelet (for which he grew the beard), was awarded an order for services to art by the French government, and is currently preparing an exhibition in the TsUM department store for September's Moscow Biennale.

That rapid transformation from bete noire to establishment figure would have been unthinkable 20 years ago. Decades of Soviet-era censorship, isolation and repression saw the handful of "non-conformist" artists in the country go underground, staging exhibitions in their own apartments or performances in the woods. Many of them, including conceptualist hero Ilya Kabakov and SotsArt founders Komar and Melamid, left the country altogether.

When the USSR collapsed, the Russian art world essentially had to start from scratch. Throughout the 1990s, the Moscow scene effectively consisted of four galleries more interested in showing works than selling them to the then-miniscule class of collectors, and one state-funded centre without any state funds. Partly as a reaction against the non-existent art market, many turned to the nihilistic and unsellable genre of actionism. Kulik was naturally at the fore, impersonating a disco ball and running for president as a bull; so was anarchist Anatoly Osmolovsky, whose pronouncements ranged from theoretical texts to spelling out obscenities on Red Square.

Though that financially barren climate has long since disappeared, the experience of the 1990s meant contemporary Russian art remained a field solely for its few hundred practitioners, much as it had been under the Soviet Union. The scene, therefore, is still relatively small. With the appearance of the nouveau-riche, by-appointment-only Triumph Gallery in 2007, the number of major galleries swelled to five. Regardless of whom you ask, there are not many artists either. Artist and gallerist Aidan Salakhova puts the number at a round 101; this is somewhat worrying when you consider the first Moscow Biennale in 2005 had more than 400, and that a study carried out last year found New York to be home to 130,000.

Largely for the same reason, Russian art is generally bereft of movements, trends, and political reactions. It is instead still a story of individuals. That atomisation of Russian artists makes the field as a whole difficult for curators to characterise. Group exhibitions are thus often subject to the personal whims of curators, which can even lead get them into serious trouble.

Provocative curator Andrei Erofeev saw then-culture minister Alexandr Sokolov ban several works - including the "Blue Noses" duo's infamous Kissing Policemen photograph - from leaving the country for Erofeev's 2007 "SotsArt" show in Paris, labelling the art "a disgrace for Russia, which we'll have to answer for". Currently Erofeev is on trial for another 2007 exhibition, "Forbidden Art 2006", on charges of "inciting hatred or hostility".

Non-politicised curators, often under the influence of Soviet-era conceptualist art and its references to the early 20th-century avant-garde, can also produce exhibitions that overshadow their participants. Olga Sviblova's Russian pavilion at the Venice Biennale this year united seven artists under the incomprehensible theme of "Victory over the Future", a nod towards a famous Futurist opera from 1913 that saw set designer Kazimir Malevich make the first experiments that would eventually lead to his famous "Black Square".

This last also owes a great deal to Russian art's relative obscurity on the international scene, which, by Sviblova's admission, led her to feature seven artists instead of the customary one. Bar Kabakov, Kulik and a handful of others, few Russian artists are known in the West except to a small circle of insiders and specialists. Russian art is rarely seen in foreign galleries and museums; on a visit to Moscow earlier this year, Tate Modern curator Frances Morris was reportedly besieged with complaints over the absence of Russians in the museum's permanent collection.

The situation does, however, seem to be improving. This year's Venice Biennale had a record number of Russian artists in the main exhibition (five of uniformly excellent quality) and a record number of Russian exhibitions in the parallel programme (three of decidedly mixed quality). Thanks to that, some of the best artists from the conceptualist movement finally seem to be getting their due. Pavel Pepperstein's gorgeous watercolors of "landscapes of the future" in the Russian pavilion rightly won plaudits across the board, and sold out at the Art Basel fair a week after the Biennale opening. Old hands Igor Makarevich and Elena Elagina, featuring in the main exhibition, were honoured earlier this year with an exhibition in Vienna's Kunsthistoriches Museum alongside old masters such as Breugel, Durer, and Rubens.

Domestically, the scene appears to be developing strongly. The dearth of exhibition spaces is gradually being corrected by private enterprises in old industrial lots, particularly the Winzavod complex, the former Red October Chocolate Factory, and a massive constructivist bus garage run by Roman Abramovich's girlfriend Dasha Zhukova. These developments have helped bring about a hitherto unthinkable interest in contemporary art from Russia's trendy youth.

Artworks have now replaced public landmarks as the background of choice for girls to pose in photographs; hipster bible Afisha magazine recently highlighted a new craze for, of all things, going to lectures. There is, likewise, much promise in Russia's young artists, particularly those working in abstract genres, and former members of the Radek group based around Osmolovsky at the turn of the decade. It may still have a long way to go, but Russian art has come astoundingly far in such a short time; there's no reason why, like Kulik's beard, it can't continue to grow further still.

The Third Moscow Biennale of Contemporary Art will be held from September 25-October 25 and will feature some 80 artists from all over the world. "The theme, Against exclusion, applies (in the project's manifesto)," says curator Jean-Hubert Martin - who is also curator of national museums of France and the former director of the Pompidou Centre - "equally to basic human rights and to the world of aesthetics, which today finds itself before an inquisitive lover of all forms of art."