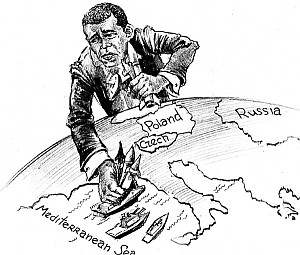 Russian President Dmitry Medvedev recently thanked US President Barack Obama for shelving missile defence plans in a restrained but almost friendly way, calling the move a "step in the right direction". Official propaganda reacted more imaginatively, suggesting that the Americans had "yielded", and all thanks to our aggressiveness now that we have got off our knees and learnt to be sternly.

A majority of analysts close to the Kremlin have made it fairly clear that as far as they are concerned the Russians don't owe the Americans anything. The Russians especially shouldn't give up anything in Iran. Only two weeks ago the prime minister himself expressed the opinion that Iran's nuclear programme poses no military threat - either to America or to Russia. Government and military structures have hinted that they intend to keep supplying "defensive weapons" to Tehran, such as the S-300 anti-aircraft missile complex.

Medvedev is the first Russian leader in recent memory to openly use the word "sanctions" with respect to Iran. In the sense that sanctions are, as a rule, not effective, but at times the simply can't be avoided. President Medvedev expressed himself in his customarily cautious manner - "on the one hand, but on the other hand". The West, however, understood him unequivocally - especially after he reproached Tehran for secretly building a second plant to enrich uranium. Iran, most likely, will not show the West any compliance, even given all the ultimatums. At best, the question will be put off and delayed.

Meanwhile, the West, in its turn, will have no idea of whether Moscow intends to support sanctions against Iran, even if Moscow meant and means only to exacerbate the anti-nuclear rhetoric vis-à-vis Tehran.

President Medvedev is now in a difficult position. Either it's hard for him not to keep his word (which the world regards as binding), or it will be even harder for him to "sell" sanctions in Russia than it was for Obama to "sell" the shelving of the missile-defence system in America. Russian public opinion as well as the political and military elite has grown used to the fact that Russia will not cede one iota to the Americans on the matter of Iran.

These circumstances will have a huge restraining influence on the president - no less, and perhaps more, than the resistance everyone is writing and talking about in their discussions of Medvedev's plans to modernise the country.

Of course, purely theoretically, one could see the Iranian question in the larger context of a broad-scale improvement in Russian-American relations. In particular, Prime Minister Vladimir Putin has outlined one of the possible directions such an improvement might take: it wouldn't be bad if America were to give Russia access to the latest technologies. Only America has its own list of what "wouldn't be bad" in relation to Russia. And this isn't just a matter of access to technology and useful mineral sources. In regard to Russia, it's not just the size of the kickbacks and bribes, or the bureaucratic red tape, but the current unpredictability of rules that depend on a particular functionary, region or who knows what. For most Russian politicians and government functionaries, the current "reset" is just another foreign policy tool. We are signing it for purely tactical reasons. We don't much like the person we're signing it with. We'll gain some time - and later we'll remind him of all this.

Georgiy Bovt is an independent journalist and political observer