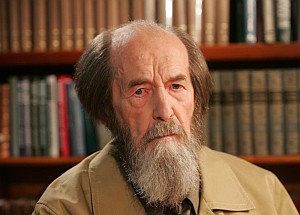 Extra! Extra! The Gulag Archipelago by Alexander Solzhenitsyn, a symbol of Stalinґs Terror the world over, the book whose publication caused its author to be expelled from the Soviet Union, the great and awful Gulag, the reading of which could lead to problems with the authorities and the distribution of which could end in a prison term, that very same Gulag has now been made required reading for all high school students in Russia. By the Ministry of Education! True, only excerpts. But this monumental three-volume work is so soaked in suffering and horror, that based on any one passage the readerґs imagination, like that of Cuvier (the famous French paleontologist who could reconstruct a rhinoceros, say, from a single tooth), will be able to reconstruct the nightmarish whole.
Then again, this seems "at odds with the Kremlinґs inclination to treat Stalinґs 24-year rule with nostalgia". It certainly is! Whatґs more, this nostalgia is at variance with an entire list of outstanding writers and poets from the Stalinist 1930s and `40s. In Soviet times, Bulgakov, Platonov, Akhmatova, Pasternak and Sholokhov were considered either partially or entirely anti-Soviet. True, in Aleksei Tolstoiґs Peter the First, critics saw a justification for the brutality of modernization, but today the cruelty in this colorful historical novel would more likely repel young readers. Other writers describe the Revolution as so much senseless carnage, while the idealistic Bolsheviks they portray havenґt a fraction of the charm of their victims. In Platonovґs grotesques, the builders of the new world come across as amusing, but extremely dangerous kooks. If the horrors described in Solzhenitsyn can be attributed to an "atypical" extreme, other writers depict the appalling and the absurd as more or less the ordinary course of events. This includes the semi-absurdist Zoshchenko, whose vignettes are probably not on the reading list due to the paltry amount of time schools spend on literature.

Akhmatovaґs Requiem is entirely devoted to the victims of the Terror - an event for which there can be no justification. In later years, she expressed furious indignation at the last chapter of Alexander Tvardovskyґs long poem Distance Beyond Distance, in which Stalin appears majestic in both his achievements and his crimes. Akhmatova did not want Stalin to be accorded the diabolical charm of Shakespearean evildoers like Richard III. She wanted him to go down in history as a vile, wicked dwarf, and perhaps that was only fair. But here her desire (and that of thousands upon thousands of humanists) conflicted with the interests not only of the authorities, but of the mythological thinking of an entire people.

History is not only a science. As the first Russian historian Mikhail Karamzin tells us, history is also a holy book, the beautiful image that every people wants to have of itself. Without this image, people will have no reason to make even minor sacrifices for their country, and will not be able to survive times of national crisis. That is why any people is inclined to see its history, however tragic, as majestic and not despicable. A majestic country ruled by a dwarf would not be in the literary power even of Shakespeare himself: in prettifying Stalin, the Russian people are prettifying themselves. A peopleґs desire to see itself as beautiful could not be controlled by Akhmatova or even by the liberal humanists of all progressive humanity, as Soviet newspapers put it.

If a person cannot have the ennobling truth, he will search for an ennobling lie. No man, much less an entire people, wants to be despicable in his own eyes. Evidently, Tvardovskyґs conception is a perfectly admissible verdict with respect to Stalin as far as the popular consciousness is concerned. Attempts to go further will only lead to his rehabilitation - not by the Russian authorities, but by the people. And the authorities will be forced to listen lest they lose popularity.

The wartime literature that was considered oppositional (V. Nekrasov, K. Vorobyev, V. Bykov) describes the war as a terrible massacre, but at the same time does not express the least doubt in its goals or in the heroism of Soviet soldiers (there is no equivalent in Soviet literature of the "Lost Generation").

The literature of the 1950s-80s does not glorify the Soviet regime. Still, it speaks far more about the sufferings of the peasantry, about the problems of the "common man" (Astafyev, Rasputin, Shukshin), than about the cultivated man (Yuri Trifonov). And it makes no mention at all of the drama of the sophisticated individual able to make his own ideological choices. Intellectual prose was suppressed not only by the regime, but by writers of the "populist" school.

The Gulag Archipelago will only strengthen the tendency to "national" problems, without leaving any room for fears of a restoration of Stalinism. Once upon a time it was the Party - not the people - that put an end to Stalinism. The Party was tired of living under the axe. The new elite have no use for it either; they donґt want to live in fear of arrest. The new elite merely want to create a unifying image of the historical past. They donґt know how to glorify the peopleґs feats while denigrating Stalin who then led the people. Though the Russian elite are very enlightened compared to Soviet times, they are aesthetically ignorant and do not realize that long ago art created a special genre to depict horrors and evil deeds not as humiliating horrors but as ennobling ones: I am referring to tragedy.

Contemporary Russian ideologists suffer not from a surfeit of love for Stalin, but from an insufficient sense of the tragic. Our diagnosis: aesthetic anemia. One hour a week set aside for literature is hardly the most ominous symptom of this illness.