The future is looking bright in science and technology 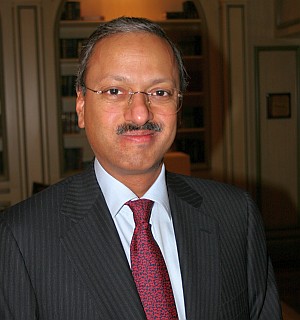 India and Russia have a long history of fruitful cooperation dating back to the Soviet era. How would you briefly estimate the level of bilateral economic ties today?

The Indo-Russia relationship is multi-faceted and deep across a number of areas, including defense, space and security but less emphasis had been laid on trade and investment.

Things are, however, changing. The level of economic engagement between the businesses of the two countries is on the rise: till 90s we had more of "officially managed trade" based mainly on barter trade arrangement between the two Governments and state owned companies. Most Indian private companies had little or no direct business contacts with erstwhile Soviet Union.

There is an increasing recognition that we can do well and indeed we have done well on the economic engagement. More Indian companies are turning to Russia and vice versa. Also with the biggest Indian private sector companies looking at Russia by opening branches or setting up representative offices in the country, the rate of economic [business] cooperation is expected to accelerate. Russia has a dynamic and optimistic attitude towards private investment. Russia is also a very good destination for high end software development and energy investment. Russia offers the benefits of a well developed infrastructure and high literacy rates. Indian interests in Russia have been mostly limited to defense, nuclear and heavy industry. India on the other hand offers huge opportunities in infrastructure, metallurgy, real estate, pharmaceuticals and other sectors. Some of the sectors attracting FDI from Russia to India are chemicals, telecommunication and trading and consultancy services.

lndia and Russia have pledged to boost trade turnover to $10bn by 2010. This raises two questions: a) does this figure reflect these countries' potential, and b) will this goal still be attained by the set deadline, given the current global crisis?

As reported by Russian Press, the Indian President during her recent visit has observed that, despite the global financial crisis, India and Russia is well on its way to achieving the target of US $ 10 billion bilateral trade by 2010. However, as mentioned by her, both the countries should not be content with this figure. As mentioned earlier, both countries have significant advantages and if we are able to exploit these we could do well beyond the US $ 10 billion trade target that we are talking about.

The Indo-Russian Trade and Investment Forums recently became an authoritative platform for developing bilateral economic relations. What concrete results have been achieved between the 2nd and the 3rd Forums? What can you say about the results of the latest Forum?

The Indo-Russian Trade & Investment Forum is the most important bilateral business engatement between the two countries. The first two Forums were held in India and this one is being held in Moscow. Apart from Ministers and senior Govt officials from both sides, a large number of businessmen from both countries meet each other and discuss business opportunities. There are also sector specific sessions which focus on the most important sectors of cooperation between India and Russia where the relevant issues are discussed and debated.

The Forum also offers a platform for networking opportunities which leads to enhanced business cooperation. I feel that the Forum is a very relevant platform to promote trade & investment and will play a very important role in the yers to come.

Both Moscow and New Delhi are continuously stressing the importance of direct contacts between the business communities of our two countries. The need to make this business interaction more active is obvious. What FlCCl is doing in this respect? What "infrastructural" problems in bilateral economic relations come to the fore at present? What are the main obstacles, which impede the cooperation?

FICCI has been taking various initiatives with Russia. This time we have been able to mount a powerful business delegation across sectors. There are CEOS representing both PSUs and Private organizations. As FlCCl is the main coordinator for the two sectoral sessions - Oil & Gas and Pharmaceuticals. Most of the members of the business delegation represent these sectors. Additionally, we have strong representation from sectors such as Chemicals, Textiles, Steel, Diamonds, Pulp & Paper, Tyres, Tea etc.

What are your observations on the present state of India's economy?

India has seen some growth slowdown in recent years. Part of the slowdown is due to the global crisis and slowdown though the impact on India was less that what was seen in some of the developed economies of the world.

Our financial system is fire-walled prudential regulatory norms set by the RBI ensured that none of our banks had any major exposure to toxic assets. We have been conservative in opening up of our financial sector, but this crisis and its impact show that our approach was just appropriate. At the same time we were adversely affected because of three factors.

One, in 2008 there was an outflow of money from the Indian markets. Foreign financial institutions, in their bid to cover their losses in home countries, were on a selling spree in the emerging equity markets and India was no exception.

Two, the reversal of funds flow not only led to carnage on the stock market, but it also led to a sharp depreciation of the Rupee. This was the second way in which we were impacted.

Three, the collapsing demand in the western markets led to a steep decline in our exports. Starting October 2008, our exports have seen negative growth on a year on year basis for ten straight months. It is also important to note that channels in the international market for raising fund also dried up and these limited the availability of resources for many Indian companies.

Part of the growth slowdown was also due to the tight monetary policy stance that RBI had taken through 2007 and most part of 2008. These adversely impacted industrial growth and the developments related to the global crisis led to further softening of the growth impulses.

Business confidence reached a low - in fact FICCl's Business Confidence Survey showed that for the quarter ending December 2008, confidence level of corporate India was at an all time low.

Having said this let me add that since then things have improved significantly.

Both RBI and the government took swift measures to boost the economy. While the RBI reversed its tight monetary policy stance, the government came out with three stimulus packages in a quick succession. These have been effective and our members tell us that things are improving on the ground following the introduction of these measures.

Our [FICCI] Business Confidence Survey has also captured this trend and the confidence level of corporate India in again on the rise. While the return back to normalcy will take time, there are clear indications that companies are revisiting projects and planning new investments in the light of the improved situation. Indian companies across sectors are considering expansion and are looking at options both in India and abroad.

Which are the sectors of economy where India is a world leader today? What sectors would you lay hopes on in the 21st century?

As is well known India has established its supremacy in software and Information technology enabled services. It is also emerging as a preferred destination for research and development especially in pharmaceutical industry. India is also being recognised as a potential hub for automobile manufacturing, engineering and design especially with respect to Small Cars segment. Investors are also looking at India as an outsourcing base for a variety of manufactured products like speciality chemicals, engineering and automobile components.

What spheres of Indo-Russian bilateral cooperation are most promising and beneficial for both sides in future?

I have mentioned earlier areas where Russia and India businesses can co-operate. Science and Technology is another major area which offers good scope for cooperation.

Russia has excellent know-how in disciplines for example theoretical physics, plasma physics, mathematics, nanotechnologies and Nano-Science, aerospace, nuclear science and some areas of biology. It has powerful research organisations: Russian Academy of Sciences which is responsible for about 450 research institutions, the Russian Foundation for Basic Research and a funding agency built upon Western models.

20 years of active scientific collaboration between the scientific communities of India and Russia under the Integrated Long term programme (ILTP), have resulted in the development of stable scientific relations and several bilateral thematic centres have been established. These centres are promoting bilateral scientific research, and are also liaising with industry in their research areas.

India and Russia have both graduated from just being buying and selling partners. Both countries are now focusing more on collaborating on the technology front. For example; a light transport aircraft (Saras), seismic instrumentation, accelerators and lasers for different applications, polio vaccine manufacture in India, development of thin films, industrial catalysts, a streak camera with a 10 pico-second pulse recording capacity, application of low intensity lasers in medical sciences (burns, tuberculosis).

In nuclear energy, Russia is to supply to India four third generation WER-1200 reactors of 1170 MW. The reactors will be set up at Koodankulam in Tamil Nadu, where two VVER-1000 reactors have already been installed, under an inter-government agreement.

Both countries are also cooperating in the new and emerging areas of science. These include nanotechnology, bio-technology, information and communication technologies, food and agriculture, seismology, as well as basic sciences mathematics etc.

Goldman Sachs named India among the BRlC countries quartet that will lead the global economy, effective from 2050. Do you see India rising to the challenges of a global leader? How do you estimate the role of Indian economy in BRlC (Brazil-Russia-India-China) format? Do you see any possibility of economic specialization within this format?

India has the potential to be among top global economic players given its advantages as a young nation and with a vast talent pool of workforce. At the same time we do face enormous challenges of inclusive growth, the imperative to reduce urban-rural divide as also provide adequate education and equip the young population with adequate skills etc. These are challenges no doubt but the way things have been going I am confident that we can overcome these challenges: India indeed will become a global leader. I must also mention here an aspect that I find most encouraging. Indians, particularly the young Indians have the confidence level to take on the world not just in business or in science and technology (Chandrayaan is a good example) but in a variety of fields especially in Sports. The recent success in Davis Cup matches in South Africa is a good example of this. India will thus play an important role as a member of BRlC group - both in terms of increasing share in global economic activities as also in formulating global economic policies. Economic specialization will largely be based on the need to achieve growth with ensuring adequate employment opportunities for our people.