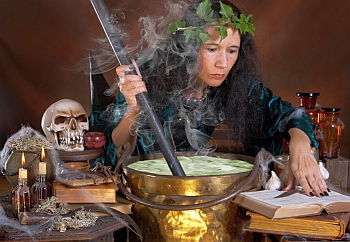 "Malakhov Plus", a popular morning show on Russian national television, is hosted by Gennady Malakhov, an ebullient 50-something ready to cure all comers of any and all diseases. There is some basis for his claims: Malakhov is a famous healer who has spent years collecting different prescriptions and published several books on folk medicine.

At the same time, Malakhov is literally the "talk of the office" among journalists for the so-called quality press. He is constantly taken to task for his lack of formal medical training and promotion of medieval methods of healing. One journalist determined to put an end to Malkakhov's "obscurantism" called on the Prosecutor's Office to investigate. The Prosecutor has yet to reply.

All this impassioned criticism has done nothing to dent Malakhov's popularity or his show's high ratings. Malakhov remains a favorite among the older generation as well as among housewives. And not just housewives. Malakhov once even invited a top manager at his station to appear on the show. The manager, they say, took every one of Malakhov's recommendation. The manager had a college education, a large income and access to the world's best medicine. But he chose to listen to Malakhov.

In Russia, so-called folk medicine has long existed entirely legally alongside conventional medicine. Its origin dates back to ancient times when every village boasted its own magic healers, babushkas who cured villagers with herbs and charms. Today, a glance at any shopper suggests that half the women in Russia are descended from those same village babushkas. Ads for women healers "descended from a long line of witches" abound. Men, too, are no less sure of their abilities to cure any illness. I wouldn't be surprised if some of them are former mid-level managers who lost their jobs during the financial crisis. You can always make money healing people.

To be honest, all Russians are to some extent "healers" since we all regularly resort to one ancient prescription or another. As children our mothers treated our colds with the tried-and-true tea with homemade raspberry jam. Stuffy noses were unstuffed with drops of garlic juice. "I have a sore throat," a friend complains. "Not to worry," I say. "Just cut a lemon into sections, sprinkle them with salt and eat them." She did - and it worked. My neighbor at the dacha collects industrial quantities of dandelions every spring. Then she pours vodka over them and lets them soak. No, she doesn't drink the juice as you might think; she uses it as a balm for her aching joints. She says it's the only thing that really helps - as opposed to pills and shots.

Every year when the melon season begins, every Russian goes on a melon diet. Growing melons in Russia, and especially selling them, is very profitable. Russians consume huge numbers of melons which can be found at stands on almost every corner. Any melon buyer will tell you that melons are not only delicious, but good for you - particularly for your kidneys. In Astrakhan where melons are grown they ran an experiment: of a group of people with urinary-tract and genital problems, half took pills and half ate melons. Both were cured. But you must agree: melons are far tastier than pills.

Once upon a time in the Soviet Union all medicine was free. But that doesn't mean it was good. Doctors were routinely blamed for their slapdash approach to patients, the lack of necessary medicines and the poor conditions in hospitals. All these criticisms always ended with the same lament: "What can you expect from free medicine?" Years passed. Now Russia is full of private clinics with expensive services, but treatment has become even scarier. Patients frighten each other with tales of private doctors who won't let you go given that it's in their financial interest to prolong and complicate any procedure. One businessman went to a private doctor with a stuffed-up nose. The doctor found him to be suffering from everything (as in Jerome K. Jerome) but postpartum depression. He cured the poor businessman, who fled, almost to death.

But we Russians always have an emergency exit - Gennady Malakhov and his folk medicine. I don't know about you, but I've already stocked up on raspberry jam for the winter.