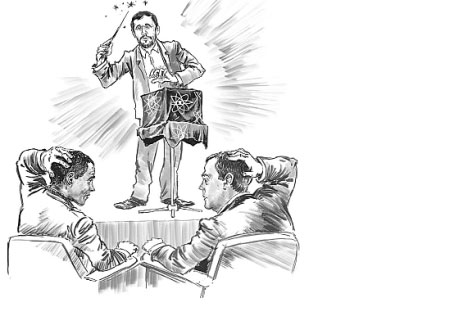 It did, however, demonstrate more unity among the major powers vis-a-vis Tehran, and we witnessed the first meeting of President Barack Obama's administration between US and Iranian diplomats. The meeting also encouraged the Iranian leadership to make somewhat conciliatory noises after a salvo of missile test launches and the revelations about a new nuclear facility near Qom. The game that Iran and the international community have been playing with each other continues, and this has to stop. It is a losing game for both sides.

Speaking after the meeting, Obama welcomed Iran's gestures, but he also held out the prospect of "crippling sanctions" against Tehran if it does not comply with the international community's demands. President Dmitry Medvedev, speaking before the Geneva talks, produced a jewel of diplomatic casuistry when he stated that although sanctions do not usually work, sometimes they are necessary. Many observers interpreted this as a subtle change in the Russian position to meet the United States in the new, more positive atmosphere created by the cancellation of US plans to deploy elements of a missile defense system in Poland and the Czech Republic. The issue, however, is not so much about sanctions as it is about strategy.

And the strategy is still lacking. The US-European idea of preventing Iran's development of nuclear weapons rests on the belief that Iran will knuckle under if the Security Council members - including Russia and China - joined in a common front to demand that Iran comply with its obligations as a signatory to the Nuclear Nonproliferation Treaty and observe Security Council resolutions. The Kremlin's plan for dealing with Iran downplays sanctions and apparently assumes that the complex and controversial issue be decided on the basis of goodwill.

If this approach fails, the West will be faced with a difficult dilemma: either to try to contain and deter Iran by nonmilitary means or resort to air strikes against Iranian nuclear targets - using the Israeli Air Force, the US Air Force or a combination of the two.

Moscow may very well be forced to join the West on a nonmilitary basis, thus admitting it had miscalculated its strategy on Iran, or face a barrage of sharp criticism from the West for having de facto helped Iran defy the United States and its allies.

Any strategy needs to proceed with a few basic truths about nuclear weapons and countries that seek them. Nations seeking to join the "nuclear weapons club" are in a quest for security and status. In this sense, Iran is no different from India, Pakistan, China or France. Iran is interested, above all, in gaining security for the ruling regime and strengthening its status as the predominant powerhouse in the Middle East. What is also certain is that Iran, despite President Mahmoud Ahmadinejad's inflammatory, malicious anti-Israeli rhetoric, is unlikely to use nuclear weapons to attack the Jewish state if it gets the bomb. But the Israelis do not want to take any chances with Ahmadinejad should he wish to follow through with his promise to wipe Israel off the face of the Earth.

Another unwelcome truth is that if a nation the size of Iran - with its rich energy resources and inflated ambition and self-image - is determined to build nuclear weapons, it won't be stopped. At best, a nuclear programme can be delayed using surgical air and missile strikes, but short of a military occupation of the country, Iran's nuclear programme will inevitably continue.

The Russians are right about one thing: the only way to prevent Iran from obtaining nuclear weapons is to create a situation whereby Iran no longer wants them. But the United States and many of its allies are naive to think Iran would walk away from its nuclear ambitions simply because of the costs incurred by sanctions.

A successful approach would go beyond the nuclear issues and address Iran's perceived needs and ambitions. Dealing with both is crucial. Tehran wants a non-interference policy from the United States. This should be offered in exchange for a certifiable commitment to stop well short of the nuclear threshold. Iran also wants to be a regional power, and it can hardly be denied an important role in the Persian Gulf and the Middle East. The future US policy in Iraq and Afghanistan, Pakistan, the Palestinian territories, Lebanon and the Gulf will be critically strengthened if the United States is able to acknowledge Iran as a prominent regional leader.

Iran should also realise there are serious costs involved if the engagement policy fails. For both political and psychological reasons, a common stand by all permanent members of the Security Council is of special importance. The present rapprochement between the United States and Russia on the issue of Iran needs to be translated into a co-ordinated approach where sanctions and opportunities become incentives pushing and pulling Iran towards a solution that is both in the interest of regional and global security and the long-term national interest of Iran itself.

To develop such a strategy and implement it will be extremely difficult. The wounds of the 444-day US Embassy hostage crisis 30 years ago still run deep, and anti-Iranian sentiment remains high in the United States. Nonetheless, Obama should not retreat from his campaign commitment to solve the Iranian problem through a bold, but calculated, outreach to Tehran. Rather than tinkering with policy instruments divorced from a policy, he needs to have a broad strategy on Iran and the entire region, where the nuclear issue is just one element, albeit of paramount importance. A failure to think big and act boldly could put Obama into a position where he would have to either accept a major policy failure or make a desperate and fateful decision.

Russia, which has a long-standing relationship with Iran, should not support the West's Iran policy if this contradicts what the Kremlin believes in. But Moscow needs to take its global responsibility as a permanent member of the Security Council seriously.

Stopping proliferation of nuclear weapons in Iran and elsewhere is clearly not only a concern in the West. It directly affects Russia as well.Russia has always said it wanted an active part in world governance. Iran is a test case for the strength of that commitment.

Dmitry Trenin is director of the Carnegie Moscow Centre.
First published in The Moscow Times