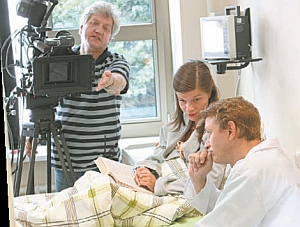 Shooting a scene of the series

A team from Russian World Studios (RWS) will go to India early next month to shoot a Russian series melodrama. The first part of the picture, called The Hindu, was shot in Moscow, and the rest will be done in Mumbai and nearby villages.

The Hindu is the first Russian series to be shot in Mumbai. The film crew will leave Moscow on 5 November and before the end of the month settle into the thriving centre of the Indian film industry. The Russians will rely on Indian help. "Russian World Studios selected its partner by inviting Indian companies to bid for the job six months before the start of shooting. Based on bids and recommendations, India Take One Production landed the contract," said Executive Producer Alexander Dostal, who organised the shooting process in India. It is the same company that shot the Oscar-winning Slumdog Millionaire by Danny Boyle. India Take One Production provided the entire range of production services to the English crew: the ideas were English, but the execution was Indian. RWS adopted the same model: the crew and top directors will come from Russia, while Indian partners will provide equipment, shooting locations and assistant directors.

The shooting will be done in Mumbai and two villages, Vai and Satara, located within 300 km of the city. For example, one of the film characters will be cremated against the backdrop of colourful Hindu temples and a breathtaking mountain landscape, with all the Hindu rituals involved. Also planned are two Indian weddings, which will be shot in Mumbai, observing all local customs and traditions.

Indian actors will feature prominently in the film. Eight received secondary roles, not to mention crowd scene actors. RWS travelled to Mumbai to do the casting. Director Alexander Kasatkin was satisfied with the results. "In India, the film industry is a big thing. All actors, even unknown ones, boast impressive resumes. But there will be no famous names for Russian audiences," Dostal noted.

The movie is based on a novel by contemporary Russian author Oleg Roi, called The Smile of a Black Cat. The dramatic plot can compete with the best Indian films. A young Russian surgeon invents a new implantation technique to accelerate the healing of bones, but his invention does not find support from Russia's scientific community. However, an Indian corporation agrees to sponsor his studies. Full of hope, the young doctor flies to India, but his plane crashes. He loses his memory, and his face is disfigured beyond recognition. The rest of the story is just as captivating: the doctor undergoes plastic surgery, becoming Indian in appearance, and recovers his memory. And he also faces a taxing moral dilemma, choosing between his Russian wife, who mourns him in Moscow, and local Indian girl Maya, whom he meets in Mumbai.

Many Indian girls based in Russia tried out for the part of Maya over two months, with help from India's consulate in Moscow. The search was done through Moscow's international student community and over the Internet, but the final choice has not yet been made. The ideal candidate must be a young, attractive actress of Indian appearance, speaking English and preferably Russian. RWS hopes to find a Russian-speaking actress to facilitate communication, but casting is also being held in India. According to the scenario, Maya has Russian ancestry, but this could be changed depending on the final choice of actress. If she is an English-speaking Indian, she will only speak English in the film.

"For Russians, India is a very exotic country, and it will be the first such experience for RWS. We have certain misgivings, but our Indian partner is very professional, which gives us confidence that the shooting process will go smoothly," Dostal stressed.

RWS is in talks with Bollywood producers to make a full-length version of the serial for distribution in India. But the problem is that this would require the addition of many local scenes, including dances and songs, which have not yet been budgeted by the Russian company. The project is under negotiation.