Pensioners bet on the stock exchange 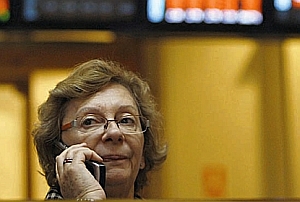 elderly can earn their pensions by playing the stock exchange

They arrive at 10:30 precisely, when trading starts at the Moscow Stock Center, and stay there patiently until the end of the working day. For them, playing the stock exchange is a second profession, and they approach it with a sense of responsibility and piety that is probably found only in people who have spent a large part of their lives under the Soviet regime. The players include people of quite different professions, from mathematicians to former cleaners. Each one makes a profit in proportion to their financial resources. Elderly people usually start trading in shares when they have about $2,500 to $3,500 at their disposal - a year's worth of pension payments. Obviously, such expenditure is only possible for people who retired relatively recently or who are getting help from their children.

"Gazprom has started moving, then! What are they doing, pushing it up or down half a percent?! For goodness sake! I'd be better off having a nap!" said long-standing player Valery Medvedev as he reacted to the stock quotes. Many people have decided to become "movers and shakers" on the stock exchange as a way of staving off boredom. Some genuinely want to earn enough to enjoy a comfortable retirement. For others, playing the market is a way of usefully spending time out of the house.They have all taken a free training course. St. Petersburg, Yekaterinburg and other cities are also providing free training for pensioners.

The way the pensioners actually do their deals is strikingly different from what we are accustomed to seeing in reports from the trading floors. Elderly people often sleep in front of the screens showing the latest market reports. But they're sleeping lightly, and about once every five minutes they wake up, glance at a table, mutter discontentedly something like, "When will it end?" and fall asleep again. If any changes happen on the market, they wake each other up. The years are telling, but their grasp is every bit as good as that of experienced investors. They count in their heads, very quickly, and analyze the situation.

The players themselves say that on average each one earns up to 5,000 rubles per day ($170). Staff in the transaction center remarked that "blue chip" securities attract the most conservative pensioners or those who are inexperienced, while second or third rank shares are of interest to the most active and emotional players.

Analysis of forecasts is usually done collectively. They get together once a week and study the leading expert analysis, then they each make their own plan of action for the next five working days.