New light on the reset road 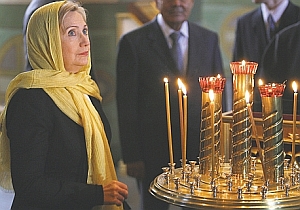 Secretary of State Hillary Clinton attended an Orthodox cathedral in Tatarstan after visiting a mosque the same day, lauding the predominantly Muslim region as a fine example of multi-ethnic tolerance and peace

The visit of the U.S. Secretary of State to Russia highlighted improving diplomatic ties. American policy does not cease to be American, nor Russian policy Russian, but both sides are now following a more intelligent line.

Secretary of State Hillary Clinton's visit to Russia earlier this month was a celebration of better ties and a call for joint action. Some Russian analysts suggested that President Barack Obama's Nobel Peace Prize contributed to the momentum for more nuclear cooperation, even exerting subtle pressure on Russia.

There is growing hope that a treaty on strategic nuclear armaments will be concluded and dialogue on Iran will improve. Of course, Russia does not seem to want its southern neighbor to acquire nuclear weapons, and even at the worst of times played "good cop - bad cop" in putting pressure on Iran together with the Americans and Europeans. The trouble was that the "bad cop" (the United States) was too bad and even hinted at possible military action, while the "good" one (Russia, in this case) was too nice. But today the degree of understanding on Iran is greater, and mutual tactics could prove effective.

Now President Barack Obama is returning to a multilateral policy resting on international institutions. He is correcting the gross mistakes of the former administration, which declared its intervention in Iraq a "campaign for democracy" and arrogantly preached democratic values. These mistakes have brought much harm not only to the U.S. image, but also to democracy as an ideal.

The United States has eased up on reproaching Russia for democratic flaws. Clinton did support human rights activists and nongovernmental organizations on her trip, and these values and objectives will not disappear from American foreign policy. A bilateral commission on civil society will be watching its progress. As long expected, Russia has softened the hard stance imposed on its NGOs.

After the visit of Hillary Clinton to Moscow, U.S. business circles hope the Russian market will become more accessible to foreign investors. "For a long time, America was reproached for not having enough activity in Russia. Now the situation is changing, thanks to Barack Obama," said Andrew Summers, President of American Chamber of Commerce in Russia in an interview with "Le Figaro".

Jonathan Swift once said that a person need not be shy of acknowledging his mistakes. It only means that today he is wiser than he was yesterday. President Dmitry Medvedev told a forum in Yaroslavl that Russia is all for a wise policy. If the Americans are for it, too, then the "reset" will follow.