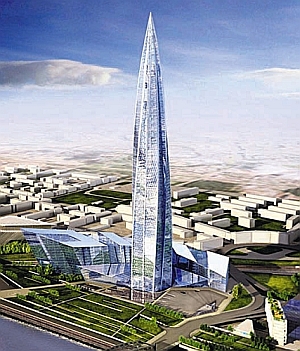 The 396-meter-tall skyscraper, to be owned by Gazprom, has divided the Russian society in two: opponents of the project plan to organize protests while its supporters point to the potential benefits that the new business center could bring.

The United Nations Educational, Scientific and Cultural Organization (UNESCO) has called on Russia to halt construction of the Okhta Center, because such a tower "could affect the outstanding universal value of the historical center of Saint Petersburg and related groups of monuments." The organization warned that the construction of the skyscraper would place St. Petersburg on the list of endangered world heritage sites in 2010. Likewise, representatives of Russia's Hermitage Museum and the St. Petersburg Union of Architects have previously spoken out against the business center.

The building, nicknamed the "gas-scraper" in the Russian media, has been designed by the British architectural company RMJM. With a budget of $2.4 billion, construction of the Okhta Center main ensemble is supposed to be completed by 2012. The whole complex will have been erected by 2016.

The project's Chief Architect, Philipp Nikandrov, believes that "UNESCO should not only protect the existing world heritage, but also acquiesce to the creation of new world heritage." In his opinion, in the future the Okhta Center should become the new symbol of St. Petersburg, and a part of the global architectural heritage. Nikandrov pointed out numerous benefits that the new business center would bring to the city. Firstly, after the Gazprom headquarters get relocated to St. Petersburg, the city budget will receive a boost from the company's taxes. The center will lure new investors and business into the city, and create more than 10,000 new jobs.

Secondly, the building would attract tourists from all over the world. There will be a viewing point on the 67th floor, which could become the main tourist attraction in the city. "Two and a half million tourists visit St. Petersburg every year," Nikandrov said, "but this number seems to be quite small in comparison with the London Eye, which is visited by 2.6 million tourists annually, or the Eifel tower, which is visited by seven million."

Additionally, construction of the Okhta Center would improve the infrastructure of the Krasnogvardeysky district in eastern St. Petersburg. There are now plenty of industrial operations in the area that have a negative impact on the environment and pollute the air and soil. When construction of the center is completed, manufacturing facilities will be moved out of the area.

However, most of St. Petersburg's inhabitants oppose the project. According to a recent poll conducted by TOY-Opinion Research Company and ECOM Center of Expertise, 66 percent of respondents would vote against construction of the tower. Forty percent said they "categorically object" and 26 percent said that they are "somewhat against" it. Seven percent support the project "entirely," and 13 percent said they are "fairly" supportive of it.

Activists from the "Live City" movement are convinced that Gazprom's project is being implemented in violation of the law and without public opinion being taken into consideration. The goal of this movement is for the skyscraper to get relocated uptown or to the suburbs. "The main problem of the project is that it is in violation of land use and development rules," said Julia Minutina, a "Live City" coordinator. "Buildings should not be taller than 100 meters near the city center. The Okhta Center would negatively affect the classical panoramas of St. Petersburg. As soon as one developer breaks the rules, others will follow suit. It might lead to city-planning anarchy in future," she added.

Elizaveta Istomina, another member of "Live City," agreed: "With its architectural-historical environment, St. Petersburg is like a living organism with own genetic code," she said. "The new skyscraper seems to be absolutely inappropriate in this code. It will look as ugly as a giant cancerous tumor destroying this living organism." The activists of the "Live City" movement will organize a protest march on October 10. "We want to hold a massive demonstration," Minutina said. "The governor of the city and the Russian government should see and understand public opinion."

"Construction of new skyscrapers in big cities is an inevitable process," said Elena Vlasova, a city planner at the Bureau Bos, an international architectural company. "Tall buildings further the city's development. Their appearance leads to an increase in land and property prices and attracts investors, which, in turn, bring economic benefits to the city." Vlasova believes that Russian city planners and the government should take international experience in regulating the construction of skyscrapers into account. A number of big cities in the world have their own historical and cultural heritage sites, but proper solutions on building skyscrapers without damaging the city's unique character can always be found.

A Booklet on the Okhta Centre Project