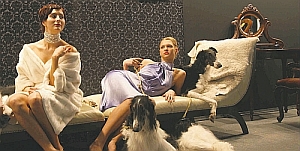 The idea that the super wealthy should not be ostentatious with their fortunes, and at least appear to live like ordinary people, has been popular in the West for some time. Some of Russia's new rich want to be seen differently following the economic crisis.
Sergey Polonsky, the head of Russian real estate giant Mirax Group, was a billionaire before the Russian stock market collapsed. After the crisis hit Russia, he sold his assets, including his prized yachts, to keep his ailing business afloat. That act of prudence is a far, far cry from his 2008 persona, including a comment, repeated in the press, that anyone with assets less than one billion dollars is a loser.

The proud, down-scaling mogul hasn't stopped boasting, however, and torturously described his responsible act on his blog. "After giving it good thought during the New Year holidays, I decided it's not the time to feed others' economy. In view of this, I decided to sell my hotel, Sungate Port Royal, yachts, and house on the Côte d'Azur and put all the proceeds into further construction of our projects."

He even moved from boasting to preaching: "For intelligent people, money is a means and for stupid ones it is a purpose," he wrote.

Could this be a sign that the days of conspicuous consumption by Russia's super-rich are over? Are we seeing the shoots of socially responsible business? Not so fast, experts agree. The oligarchs are still in the game of wild profits and consumption. More recently, they have received a lot of help from the government. Prime Minister Vladimir Putin provided billions in loans through natural resource grants, particularly in minerals and mining. This has received a mixed review, as the emerging but vulnerable Russian middle class began to shrink again.

Mikhail Fridman, the founder of Alfa Group, is worth $6.3 billion, and is number 71 in the 2009 Forbes billionaires' list (a fall from number 20 in 2008). Fridman also appears to have gone anti-yacht, saying that a passion for private planes or yachts wasn't quite "healthy". He added, "It's not a benchmark of success for me. I am in no way condemning anyone and have a philosophic point of view regarding the toys of our oligarchs. I just think it's not very clever to be seriously interested in buying expensive things, cumbersome and useless... It's not that their interests are narrow... It's that they hadn't found other touch points.They don't get other values. My personal sign of success is for me to be able attend a play or a concert anywhere in the world, just take off and go there."

In Russia, righteousness and temperance is becoming sexy again. Perhaps there is, after all, a ceiling to the oligarchs' conspicuous consumption.

Another wealthy Russian, Oleg Tinkov, who has made his money in the restaurant business, food production and financial services and who admitted to selling his personal jet due to the crisis, concurred. "In the West, showing off your wealth is considered a poor show. I've always personally agreed with that. Now this tradition has become a trend here. Modesty and limited consumption is becoming popular, and this is line with my philosophy."

In Britain, where many Russian oligarchs have moved their businesses and families and purchased massive mansions, the crash has not fundamentally changed public attitudes toward wealth, said Ben Page, the chief executive of Ipsos MORI, a market research agency.

"The country is as divided as ever on whether it is acceptable to be filthy rich or aim for a society with less wealth inequality, but it has made some wealthy people more self-conscious about flaunting conspicuous consumption when their companies are making people redundant and profits and personal wealth are down."

But in Russia, consumption among the rich is still at a high level, according to Tom Mundy, equity strategist of the Russian investment house Renaissance Capital. "Oligarchs have had help from the government," he said. "In the beginning of the crisis, experts were predicting the death of the oligarch...but it hasn't happened," he said.

An employee of a Russian transportation millionaire, who asked not to be identified, said about his bosses' circle, "They're still living ostentatiously. This is their way of life. They're not calming down. They just can't be satiated, although it's about time they did."

As a nod to Russia's 19th century merchants who set up hospitals for the poor and contributed to the arts, Russia's rich have tried to improve their reputation by spending money on charitable causes. When oil and gas industrialist Viktor Vekselberg brought the Faberge eggs back to Russia at a price of over $100 million, it made headlines around the world and von him grace with the Kremlin.

More recently, Vladimir Putin was dismayed by the show of extravagance by Azeri-born tycoon Telman Ismailov; he opened a luxury hotel in Turkey at a reported cost of $61 million during the recession.

A poll conducted by Russia's Center of Public Opinion showed that 67 percent of Russians thought that "to throw money around" when there are many poor people in the country is amoral and shouldn't be permitted. Moreover, 56 percent of those polled said that the conduct of the rich is not their personal business but a concern for the wider public and the government.

Oligarchs still appear to be out of favor with common Russians who have had to bear the grunt of high unemployment and increased prices.

"I'm negative about the oligarchs. They are not thinking about the people," said Nadezhda Sorokina, 55, a single mother of two sons and a pensioner from Moscow.

"Although I'm retired, I will be working for a long, long time. The oligarchs haven't changed from the way they were. Now let them move their money from their foreign accounts to Russia or sell one of their five villas abroad."