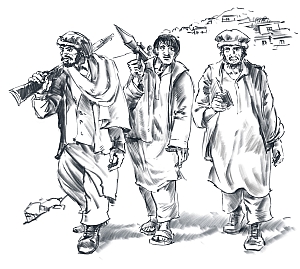 We know who financed the Afghan guerrillas 25 years ago. But who foots the bill for the Taliban now remains unclear. In the third part of his series about the lessons that can be learnt from the Soviet experience in Afghanistan, Vladimir Snegiryov poses question about the mysterous financial side of Taliban's strength.

I can't help laughing when I hear people say that the coalition forces are stuck in Afghanistan, and would do well to draw on the Soviet combat experience there. The allies are not really stuck. I do not think Nato strategists were so naïve as to hope for a quick victory when they sent their troops against the Taliban. Moreover, the United States, if not the other allies, have no intention of withdrawing from the valleys of the Hindu Kush in the near future. Not that they announce it publicly, of course, with the official story being: "We will soon bring justice to the Islamist terrorists and go home." But then how do you explain their deep entrenchment, at the Bagram air base, for example, with long-term fortifications and extensive infrastructure?

Many serious analysts believe that the Taliban fighters represent an intermediate objective, and some are certain that the guerrillas are a pretext to secure a foothold in these mountains. Washington decision-makers clearly understand that Afghanistan is the best vantage place for strategic control in the region. On the west it borders Iran, whose nuclear ambitions and unpredictable leaders have been a nagging concern for the West; to the south lies a highly volatile Pakistan rattling its A-bombs. Afghanistan also has a common border with China, the principal rival of the US in the 21st century. So, cynical as it sounds, the Taliban reared its head at a pretty handy moment.

As for the Soviet fighting experience, such coalition members as the UK hardly need any external consultation on the subject. Back in the 19th century, the British army penned a field manual in its own blood for those paying a visit in arms to the Afghan hosts. Americans have also learnt their Vietnam lessons. In the last analysis, Nato's experience may well outweigh ours...

Even if you reject all assumptions and speculation, trusting that the Taliban insurgents are the real cause for the coalition's stay in Afghanistan, some poignant questions still clamour for straight answers. We all understand that the critical factor in why the 100,000-strong Soviet army failed to defeat the local warriors was the enormous funds pumped into the Mujahideen. According to official American sources, the assistance provided annually to the insurgents when the Soviet-Afghan war was at its height, totalled nearly $1.5bn. In fact, the so-called "limited contingent" - as the 40th Army was euphemistically termed in the Kremlin's coy understatement - faced a Western foe fighting with the hands of Islamic guerrillas.

And what do we see today? The "limited contingent" of the international forces whose current capability equals and, in some respects, even exceeds that of the Soviet 40th Army, can do as little as our own troops 25 years ago against the illiterate rag-tag warriors of Islam. Again, their fierce resistance is fuelled by something more tangible than their faith, and the support of local population. Weapons, ammunition and communication equipment do not emerge out thin air. This begs the question: who are these people throwing billions at the Taliban fighters? What are their goals?

I cannot believe that such gigantic sums of money - and the Taliban would not survive even for a day without support from the outside - are untraceable. What have Nato's intelligence services been doing? Even if we accept the idea of a Saudi trail, questions still remain. How long will the West, with all its vast financial, political and military might, remain unwilling or unable to come to terms with the Saudi sheikhs?

Ten years ago, suspecting Serb genocide against Kosovo Albanians, Nato did not hesitate to launch a massive attack on Yugoslavia. I am not calling for a similar attack against those sponsoring the Taliban: suspicions alone are not enough to take punitive action. It's just a reminder that when Washington wants to solve a problem, it will stop at nothing.

A quarter of a century ago, arms-laden caravans from Pakistan, Iran and even China, headed for Mujahideen camps. Today, the only remaining source is Pakistan, which is still on fairly good terms with the US. In other words, sponsors of bin Laden and Mullah Omar now have few channels to choose from. So why do we hear such little news of military success against the Afghan extremists?

Several years ago in Kabul, I asked a top American diplomat: "How long will your troops stay in Afghanistan?" "They will stay here as long as will be necessary to eliminate the threat of terrorism," she said, reciting the state department's slick formula.

Given that the Taliban-controlled area is not shrinking, but rather expanding, the terrorist threat will not be eliminated any time soon - giving the International Security Assistance Force licence to stay in Central Asia as long as they will. Alas, the reality does not bear out the good Samaritan story.