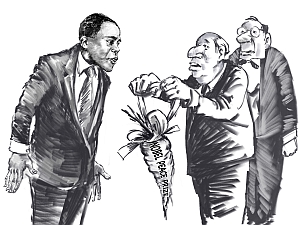 In the late Eighties, as Mikhail Gorbachev was steering the Soviet Union away from its standoff with the West in a bid for a "new thinking" foreign policy, Georgiy Arbatov, a prominent foreign policy expert, made a remark: we will do the most horrible thing to you; we will leave you without an enemy.

Barack Obama seems to be doing something similarly horrible to the entire world by depriving it of a long-established opponent and scapegoat. Bush and Clinton before him (though considerably less resented) were convenient bogeymen for both US rivals and allies. Governments could comfortably blame Washington for all their national and global mishaps and cite its rigid unilateralism to account for their own inaction.

Clearly, America has sufficiently marred its record by indulging in excessive consumerism - which aggravated economic pressures on the rest of the world by pursuing an arrogant and aggressive foreign policy - by its open aggression against Yugoslavia and Iraq and by assuming - to the hidden contentment of its allies - the role of global policeman (and failing miserably), only to contribute to international instability and chaos.

Yet, both the American elite and general public found the strength to veer off the self-destructive course and elect Obama, a president representing hope and change.

The new president has launched a radical overhaul of American foreign policy. Obama put forward a new philosophy of cooperation in place of unilateral leadership and global domination, discarded the democratic messianism, replaced the ill-concealed hostility to the Islamic world with words of respect and friendship, and made statements signalling a political U-turn on climate change. In addition, the United States gave a green light to emerging economic leaders to increase their share of capital and respective votes at the IMF. For all these improvements, or rather in the hope of their efficacy, Obama was awarded the 2009 Nobel peace prize.

For Russia, America came forward with a "reset" initiative to put derailed relations back on track, primarily through arms control and arms reduction talks. Russia and Europe were granted the long-sought scrapping of US plans to set up missile defences in Poland and the Czech Republic. I think this small step was a painful decision for the Obama administration.

Of course, America has mostly talked the talk of change, and we still need to see it walk the walk. We may (and must) speak of these changes as having been forced by circumstances; we might even doubt their sincerity and sustainability.

The to-do list of global problems Obama has to face makes grim reading: leave Iraq, let Iran build nuclear capability - or strike first, do something about Pakistan, resolve the gridlocked Arab-Israel conflict and turn around the de-facto failure in Afghanistan. Add to this the formidable economic challenges at home and the cleft among the political elite.

I would put the odds for Obama's political success at 40/60. But hope remains. If the American and global economies start picking up vigorously in one or two years, Barack Obama will be applauded as a saviour and forgiven failures.

I think increasing global instability in general will keep Russia fairly critical of the American agenda. In spite of its modest economic capability, Russia has enormous potential for inflicting damage on the United States. Without Russian support, America will struggle to achieve most of its immediate and long-term goals in the international arena.

Russia has even more to win from nurturing good ties with the US. Wishful thinking apart, we are unlikely to become a world-class economy in the foreseeable future, and we will have fewer chances to do so without a close relationship with the most advanced part of the world. It will be increasingly uncomfortable, and even dangerous, to carry on without a strategic partner. It is important to continue a friendly dialogue and build upon the strategic union with China, but such a union has obvious limitations and its effectiveness will depend on good relations with the US. As a Russian Occidentalist, I dream of close cooperation between Russia and the EU. But Europe will long remain ineffectual as a potential ally and keep its distance because of the growing values gap. While in transition towards post-European values, Russia is gradually embracing the old European paradigm. A disconnect with the US is also obvious, but America is turning back to old European realism and Obama's policy clearly demonstrates that.

Regardless of the unrestrained anti-Americanism of the public and deep mistrust of the Russian ruling class towards US foreign policy, the recent year has seen a number of prominent public figures and businessmen calling for closer ties with the United States. One of them - Sergey Dubinin, an ex-CEO of the Central Bank - even published an interesting book to support the cause.

I personally would like Russia to secure such a partnership, but I am still wary of promoting the issue right away. I am afraid that Americans might succumb to the old ways and trade their friendship for a price.

We should, nevertheless, try to exploit the opportunity extended by Obama. America under him has challenged Russia to action. History is granting us a second, perhaps short-lived, chance. So why not take the risk and talk with the United States about converging towards a political and strategic alliance?

In what format? Such an alliance could be based on the following framework: a new agreement on strategic offensive reductions, a European collective security agreement, which would prevent Nato from expanding to Ukraine or even from inviting Russia to join - and thus dramatically transforming - this organisation, an agreed action plan regarding proliferators for coordinated deterrence of new nuclear nations, concurrent and linked efforts to create regional missile defence systems, joint guarantees for nations who feel threatened by the new wave of nuclear proliferation and close cooperation in Afghanistan.

It is very possible that even if the Russian president comes up with this deal (not publicly, of course), it might be turned down or given the run around the way they are trying to handle Medvedev's proposal on a new European security treaty.

Obama may win as well, without losing his intellectual and political grit. It would be poor statesmanship not to try to bet on it. The chances are low, but the prize can be huge. So we need to think long and hard on how to respond to the new "American challenge".

Sergey Karaganov , a political scientist, heads the Council for Foreign and Defence Policy, an independent and influential analytical institution.