One man and his gun 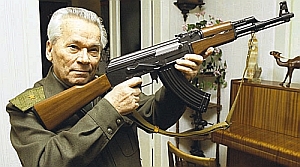 Bearing arms: Kalashnikov and the weapon he developed

His chest clinking with medals from different regimes, Mikhail Kalashnikov has been revered by Soviet and Russian leaders, from Stalin on. Small wonder, given that his weapons have earned his country a fortune, while he has never asked anything in return.
Far from being rich, he does not own yachts or airplanes. He belongs to the generation that appreciates the value of human recognition. "Are there many famous designers who have a monument built in their honour while they are still around? Or a museum? Do many have presidents of their countries coming to wish them happy birthday? I do!" says Kalashnikov. "I have no celebrity attitude. I am the same man I have always been. I just keep working."

"A Russian sergeant armed the entire Warsaw Bloc," wrote journalists during the Cold War. In fact, Kalashnikov armed the whole world: the AK assault rifle is manufactured globally with or without licence. Many countries have equipped their armies with his creation: for some it has even become a symbol of power and resistance featured in their state emblems.

The story of how he designed the AK-47 has been shrouded in legend and rumour. A semi-literate boy from a large farming family beat some of the top small-arms designers in a competition for the best assault rifle. How did it happen?

Mikhail Kalashnikov was born on November 10, 1919, in a West Siberian village. His mother bore 19 children, but only eight survived. In 1931, the Kalashnikovs were stripped of their property as the country was swept by the repressive campaign against well-off peasants. His father died in exile, while Mikhail's elder brother, Victor, spent nine years in labour camps.

Signs of his future calling became apparent early in his career when, while serving as an army tank driver, Kalashnikov invented a device to count shots fired by the cannon. For his ingenuity, the famed Marshal of the Soviet Union, Georgy Zhukov (who at that time commanded the Kiev Special Army District), presented the young inventor with a watch with "Mikhail Kalashnikov" engraved on it. Shortly afterwards, the war became the instrument in his choice of vocation. As Kalashnikov puts it: "Germans were responsible for my becoming a gun designer."

When the Great Patriotic War broke out, the young tank driver was sent to the front, where he was badly wounded. Bedridden, he started thinking about creating a submachine gun, which Russian soldiers desperately needed. Without any previous engineering training, Kalashnikov set to work thinking, designing, testing and discussing weaponry with experts. He finally got a job in an arms design bureau and began learning from professionals.

From the start, Kalashnikov clearly identified his own principles of design: his rifle should be simple and reliable. However, success proved to be elusive. It was only in 1947, after the failure of numerous prototypes, that Kalashnikov's design was accepted in a competition organised by the defence procurement agency.

Despite competition from the top small-arms makers in the Soviet Union, Kalashnikov's prototype made it to the second round, and ultimately to the final test.

At last, the jury board announced: "Our recommendation is to adopt the assault rifle designed by Senior Sergeant Kalashnikov for operational service."

In 1949, Kalashnikov saw his rifle adopted as the army standard, and he received the prestigious Stalin Award. He spent the next 60 years refining his award-winning design. And in doing so, he felt as if he were honing his own personality.

This autumn is a special time for Kalashnikov. Before his 90th birthday, he celebrated the 60th anniversary of his joining the weapons factory in Izhevsk, a historical city of gunsmiths about 600 miles north-east of Moscow.

The Izhmash machine-building plant was the first to launch mass production of the AK-47 rifle that spawned a whole new generation of small arms.

His son Victor is also a small-arms designer, striving, according to Kalashnikov senior, "to surpass his father". One of his best known weapons, the Bison submachine gun, is carried by various Russian police units.

In his free time, Mikhail Kalashnikov enjoys classical music and faithfully attends the Tchaikovsky Music Festival. He also loves poetry and has quite a few friends among the poetry fraternity. The inventor has also published several books and is a member of the Russian Union of Writers. Five years ago, a unique museum of small arms opened in Izhevsk. Its core exhibition is based on the success story of Mikhail Kalashnikov and his brilliant invention. Some visiting delegations will be welcomed by the designer.

"I still closely follow what goes on in the world, but I try to avoid making any political statements," he says. "Perestroika destroyed the USSR and sapped my own optimism - as well as that of others of my generation. Although we faced many problems under Communism, we still enjoyed a much stronger social safety net."

As for his vision of small arms evolution, Kalashnikov is confident that the upgraded AK rifles will reign supreme for at least 25 years, until the advent of new, high-power cartridges. In general, gun makers will continue to design weapons for better precision and penetration through modern body armour and light obstacles.