Pensioners hold a key to revival 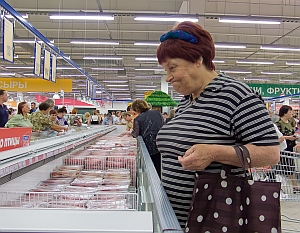 New pension plans will give the elderly more money to cover basic living costs, in the hope they will spend the extra cash on domestic products

As the world looks for ways to stimulate the economy, there's a growing interest in those that have finished work. It seems that the retired could be a significant component in the fiscal reconstruction. They're certainly not being overlooked, as a new pension plan reveals.

Tanya Kokovina sits in her kitchen drinking tea. A former factory worker, she has been retired for six years and is struggling to get by. But life should start to look up next year: In October, Russia's prime minister, Vladimir Putin, promised to increase average pensions by at least 40pc. Part populist headline grabber, part economic stimulus package, the move should put more cash into the hands of some of the neediest Russians.

"The state gives me 5,600 roubles (£117) a month, but half of that goes on utilities and rent for the apartment," says Kokovina, who lives in the leafy Sokol district of Moscow. "I need £275 to £300 a month on top of that to have a comfortable life."

Russia's OAPs have had a miserable time since the fall of the Soviet Union. Their life savings were hyper-inflated away in the early Nineties, and the all but bankrupt state could only afford to pay a pitiful £6 a month for most of that decade. Following the economic boom of recent years, pensions have risen nearly twentyfold to the point the where pensioners can cover the basics, but the increases have trailed the rising cost in living.

Like many women in her position, Kokovina works on the side, making soft toys and scarves to sell in the market. "I have no idea how I could live if I had to depend only on my pension: my diet would be limited to cabbage soup and porridge. Really, I wouldn't be able to do anything other than survive."

Mr Putin hopes to kill two birds with one stone. As well as dramatically improving the lot of ordinary people, underlying the increase is his calculation that giving state money to pensioners is one of the more effective ways of stimulating an economy that is spluttering back to life. "This money will go where it's needed," he told international investors at the recent VTB Capital investment forum in Moscow. "Ask yourself what pensioners are spending their money on. It is not luxury goods but basic things; things that are made in Russia."

"In the past, the Kremlin was fixing leaks in the pipes by putting a bit of duct tape over the worst holes; now they are looking at installing a new set of pipes," says Ariel Cohen, a senior associate at the Hermitage Foundation in Washington.

The first stage of the reform is to dramatically boost spending on pensions to a whopping 10pc of GDP in 2010. The target is for pensions to reach 7,750 roubles (£162) a month on average, then 8,408 roubles (£175) a month at the end of the year, "which means an impressive 50pc increase... or increasing the ratio between average wages and pensions to the level it was at in 1990", according to analysts at Merrill Lynch.

Some economists worry that Russia can ill afford such a huge increase in social spending when the state is facing its first budget deficit in nearly 10 years. Merrill Lynch says the move means the state will have to top up the pension fund with transfers worth 3-4pc of GDP to meet their commitments in the next few years.

Others worry that a big increase in pensions will be inflationary. Russia has been battling inflation for more more than a decade and a half. By the start of 2008, the Kremlin had brought the rate down to single digits for the first time in modern history: one of the few beneficial effects of the current crisis is that prices have actually fallen in the last two months, according to the Central Bank. The priority now must be to get the economy moving using some of the hundreds of billions of dollars the state has kept in reserve.

"Any stimulus spending will cause inflation, but once you have decided to go down this road then the only question is: where do you spend the money? The advantage of giving it to pensioners is it will go directly in the hands of millions of people. This is likely to cut graft [syphoning off cash] as, if you spent it on three of four targeted projects, then you have the chance that part of the money will end up offshore," says Ronald Smith, head of strategy at Alfa Bank.

Handing trillions of roubles to pensioners will almost certainly bolster the fragile return to growth that was visible over the summer, but it can only be the first step in a wider reform of the pension system - which will take time. There are two major problems to overcome: the first is that the average pensioner is not financially sophisticated; second, many small Russian investors got badly burnt by the pyramid schemes of the Nineties and remain very wary of the investment industry.

Kokovina says she has seen the pension fund adverts, but remains very sceptical. "Yes, of course, I heard about private pensions... but I didn't really understand what it was all about, so I didn't look into it. After the Nineties, I'd be very mistrustful of any scheme run by a commercial company."

2 According to the Public Opinion Foundation, 29pc of pensioners said their pension was enough to cover their food and clothing expenses; 44pc said it was enough only for food; and 20pc believed it wasn't enough for food.

3 Russia has around 38m pensioners; two thirds are women, and 22pc are employed.