Privatisation: the sale of the century 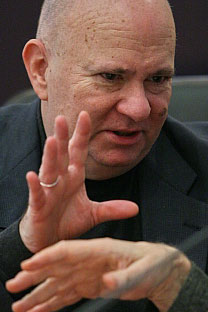 Martin Gilman, former senior representative of the International Monetary Fund in Russia, is a professor at the Higher School of Economics

Just as the rest of the world finally seemed to acclimate itself to a particular Russian form of state capitalism, the government has decided to begin privatizing a perhaps significant amount of its corporate stakes.

On Oct. 5, First Deputy Prime Minister Igor Shuvalov mentioned that up to 5,500 companies could be targeted for privatization over the next three years, and Finance Minister Alexei Kudrin added that Russia should reduce state and regional authorities' ownership of business to 30 percent or less, from about 50 percent now.

Maybe we should not be so surprised. The purported state capitalism model, with government at various levels owning all or large stakes in a broad range of companies, especially large and strategically positioned ones, was always more of a concept than a reality. After all, state ownership in Russia, even after the recent increase in ownership stakes to deal with the negative impact of the financial crisis, is still lower than in most countries of the European Union. At a government meeting recently, Prime Minister Vladimir Putin acknowledged that the state had widened its presence in the economy during the financial crisis, but he promised to initiate a new privatization drive.

Despite the encroachment of the state in some highly publicized cases in recent years, the government's official long-term strategy calls for more, not less, privatization. This stance is predicated on the usual arguments that the state is rarely an effective manager in a market economy and the state holdings are a revenue drain.

In fact, in late 2007, if we can remember so far back, the market was anticipating an unprecedented number of initial public offerings by state holdings. But then the crisis intervened, virtually shutting down the international market for IPOs.

In a sense, the government's initiative to privatize state holdings starting next year is just a reaffirmation of its earlier strategy. Of course, the actual timing will depend on market conditions. But with low inflation, abundant liquidity and a booming stock market, foreign investors seem keen for higher yield in emerging market shares. The Russian government may oblige, assuming that global markets continue to shed their risk aversion in the months ahead. Unlike two years ago, though, the government has more than just a strategic reason to unload its corporate holdings. Now the federal budget is in deficit, and there is a sound fiscal reason to raise revenue from privatization. The draft 2010 budget foresees 7 billion rubles ($237 million) from privatization, but reports on last week's government meeting indicate that the possible amount could be up to 10 times higher.

In Russia, privatization has been an emotive issue, no doubt because of the initial starting conditions of a completely state-owned and controlled economy in Soviet times as well as the sometimes controversial results of the previous waves of privatization. It was a mixed story. The initial wave of so-called spontaneous privatization in the late Soviet period involved managers seizing control of their companies and was followed by the large-scale and generally successful voucher privatization and housing privatization from 1992 to 1994. It then led to the much-maligned loans-for-shares scheme in 1995 that systematically favored groups with ties to government interests in the transfer of control of 12 companies. The resulting scandal still gives privatization in Russia a bad name, even though, as UCLA's Daniel Treisman concludes in a forthcoming book, the amounts involved relative to the size of the economy were not so large and the underpayment for the assets acquired was not in most cases so outrageous considering the actual market conditions and political prospects at the time. In fact, subsequent privatizations have generally been seen to be conducted at fair-market values.

Hopefully, the forthcoming wave of privatization in Russia will fare better than in the past. Last week, Putin went out of his way to stress that federal property should be sold at the real market price without any discount or privilege. Assuming that market conditions are favorable to the privatization of state holdings next year, how likely is it to happen? Here it is important to appreciate the underlying motive as well as the more obvious ones. The clear motives include the desire to raise revenue and future productivity. The underlying motive is more complex and specifically Russian. It is useful to recall that the initial strengthening of state control starting in 2004 seemed to be fueled more by strategy and personal interest than any ideology. Unlike Western Europe during earlier phases of nationalization, the move toward state ownership was devoid of any ideological baggage.

Now, the latest move toward privatization is likewise fueled by the same pragmatic elements. With the designation of strategic sectors in May 2008, the state can now logically divest of its not so strategic holdings or reduce the extent of holdings even in strategic sectors.

Perhaps one of the most potent reasons to move ahead now is that it would clearly be in the personal interests of those who, purportedly acting on behalf of the state, grabbed the assets in the first place. These officials and their associates now occupy senior management positions and directorships as a result of state control in a wide range of companies and banks. However, their positions - and the associated wealth and power - are only secure as long as they personally occupy those functions. What better way to ensure that these new-style silovarchs and their families enjoy their newfound wealth than to receive shares on a personal basis as a result of a market IPO of all or part of the state holding in compensation for services rendered? It is much more remunerative than any pension plan.

If I am right that many siloviki and their associates are seeking to make permanent the benefits of their power grab, then the timing of the forthcoming IPOs could be meaningful. If they collectively start to think that Russia may become a more normal country with transparent corporate governance and the rule of law, then it may be time to cash in.

This is good news for the rest of us. In moving forward with a possibly significant scale of privatization, Russia may be pursuing the right policy for the wrong reason. It would not be the first time. Does it matter? Probably not in the long run. As the late MIT economics professor Rudiger Dornbush said of an earlier wave of Russian privatization, it was "done without much care for niceties ... yet, in the end, it worked."