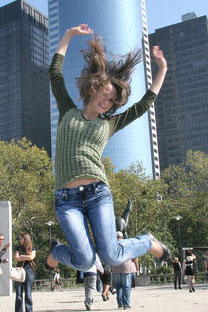 A press conference in New York on Oct. 5 was the scene for an announcement by the Hermitage Museum, represented by its director, M.B. Piotrovsky, and the Coca-Cola Company that they are set to continue their 15-year cooperation. This will take the form of a program of grants to train talented young restorers, who will be able to have an internship at the Hermitage - to be precise, in the laboratory that restores tempera paintings.

The foundation for this cooperation between the Hermitage and the Coca-Cola Company was laid in 1993, when the Coca-Cola Foundation made a $320,000 grant to fit this laboratory out with the latest equipment.

However, the true heroine of the press conference was a 14-year-old school-girl from the Rostov region of Russia - Irina Knyazeva. Her thirst for learning and new experiences won her the chance of a unique trip to one of the biggest and most captivating cities in the world - New York.

Experts at the Hermitage unanimously declared Irina's work the best in the competition for high school students, called "My Concept of the 21st-Century Museum." Thanks to her ability and drive, Irina was able to visit the mecca of contemporary art, the Guggenheim Museum, together with Mikhail Piotrovsky, who personally escorted the girl up the museum's famous spiral ramp.

Irina is not the only child in her family. Her sister and two brothers couldn't wait for their sister - the pride of all 18,500 citizens of the small city of Konstantinovsk in the Rostov region - to get back home.
The press conference highlighted the question of how to boost the level of cultural education among the rising generation of Russians. M.B. Piotrovsky said:

"We have an enormous country, and people hardly travel around it. There was a time when we thought everyone would definitely visit Leningrad once in their lifetime, but now for sure the majority of people never come here. That's a huge cultural issue. There was only one thing we could do here - make entry to the museum free. It's the only museum in Russia that children, schoolkids and students can visit for free."


Information about the competition:

A national competition for high school students called "My Concept of the 21st-Century Museum" was launched in October 2008. The results were declared on March 27, 2009 at an official ceremony in Saint Petersburg. The lucky winner of the first prize was a 14-year-old school-girl from the city of Konstantinovsk in the Rostov region of Russia - Irina Knyazeva. This talented young girl's prize was a unique opportunity to visit the iconic Guggenheim museum of contemporary art and to have a personal meeting with M.B. Piotrovsky.

The aim of the competition was to enable talented children from various cities in Russia to make their contribution to creating a museum of the future.

The entrants' works had to answer a number of interesting questions:

The competition took place in two stages. The first stage resulted in a collection of 299 works, from which five finalists were chosen from each region. Their works were passed to a national jury led by Hermitage director M.B. Piotrovsky, which judged them and decided which were the best. It was these children, from Vladivostok, Samara, Yekaterinburg, Taloye village in Krasnoyarsk region, Moscow, Nizhny Novgorod and the city of Konstantinovsk in Rostov region, who got the chance to visit Saint Petersburg during the spring holidays, March 23-29, 2009, and get a springtime boost to their spirits, their outlook and their knowledge. The program for their trip included visits to such famous places as the Hermitage galleries, the museum's vaults, which very few citizens of Saint Petersburg have seen, the Catherine Palace, the Museum of Communications, the Menshikov Palace and the famous Mariinsky Theatre.