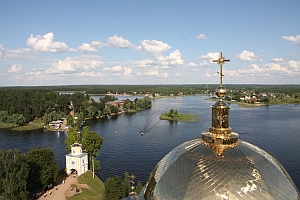 There are many large and picturesque rivers in Russia, such as the Ob, the Irtysh, and the Angara, but Russia's most famous river is, of course, the Volga. It is Europe's longest river, stretching for almost 3,700 km, with its width reaching up to 2 km at the broadest point. In times past, when rivers were the backbone of Russia's transport infrastructure, the Volga played the role as the country's main thoroughfare. It is for this reason that so many rich and beautiful cities sprang up along its banks. Even today, boat travelers often see heavily loaded barges carrying timber, grain, coal, and building materials. But times have changed, and passenger ships make up the bulk of the Volga's traffic. Notably, it was in the Volga shipyards that the model of a comfortable passenger steamship was developed in the 19th century. Ships have changed little since that time, so good that model was. An average ship carries about 200 passengers and has four decks with staterooms ranging from first and second class to deluxe. All rooms are equipped with the basic amenities and differ only in size. There is also a restaurant (three meals a day are included in the ticket price), several bars, a movie theater and a gym. Of course, river boats lag ocean liners in terms of the services offered, but there is not much need for entertainment while on board. The distances between stops are comparatively short, taking just several hours, which you can spend relaxing in a chaise lounge chair on the upper deck and savoring the beautiful views. There's simply no time to be bored, with cruise companies doing their best to provide entertainment while on the move, treating foreign travelers to lectures on Russian history or offering culinary master classes with a focus on Russian cuisine. In general, Volga cruises are in strong demand with foreign tourists, particularly those with an academic background.

For most tourists who arrive in Russia, the cruise begins in Moscow. In fact, Moscow was not connected to the Volga until a canal was dug some 70 years ago, qualifying the Russian capital for the proud title of "port of five seas". The River Terminal, a prime example of Stalinist architecture, is one of Moscow's tourist attractions, and was built at the same time as the canal in 1937. The building is shaped like a huge ship with a star-topped spire. A wide staircase leads to the entrance, which is decorated with majolica panels depicting "Moscow of the Future" (as envisioned in 1937). The building is surrounded with a large scenic park. This park, together with the embankment and the striking view of vast river expanses from the terminal stairs, lends the subtle charm of a southern city in summer time.

The original idea to link the Moscow River with the Volga came from Peter the Great, but he never got around to this project since his energies were devoted to building the new northern capital of St. Petersburg. Also, such projects were clearly beyond the technical competency available in the 18th century. The idea surfaced again in the first half of the 19th century, and an 8.5 km long section was built, which took 20 years to complete.

From the start, the canal project was touted not just as transportation project, but also as a monument to Socialism. This explains why all the locks are decorated with sculptures and bas-reliefs lauding Socialist achievements and making an impressive architectural monument. Every passage through a lock is an exciting event and an entertainment for passengers. Imagine that you've just been looking at the verdant green riverbank from your window, and now you are descending together with the ship. Once the vessel has reached the required level, the lock gate opens, and the voyage continues. Especially at night, you might be roused by the captain's instructions to the crew during the delicate procedure.

The first large city on the Volga route is Yaroslavl, which in 2010 will celebrate its 1000th birthday. The city looks pretty good for its age, considering all the revolutions and other upheavals it's experienced. Before the revolution, Yaroslavl had 80 churches, but now only 40 remain - still not a small number. At the center of the city stands the Church of Elijah the Prophet, Yaroslavl's patron saint. Built in 1670, it has survived almost intact. Its incredible frescos are as fresh as if they were made yesterday. They have been cleaned only twice: in 1902 and 1955. The secret lies in the unique mineral paints used, including paints incorporating lapis lazuli from Venice and green malachite from the Urals, which were ground into turquoise powder. First the drawing was scratched on the wall, after which paint was applied. The church, which stands opposite the city's main administration building, was a thorn in the Bolshevik eye, and they badly wanted to demolish it. However, they decided to use the building for a museum of atheism instead. Today it is once again a working church again.

The central part of the city is thickly populated with old mansions, and very few contemporary buildings spoil the picture. Yaroslavl boasts a beautiful embankment, which is currently being restored for the millennium celebrations. On summer weekends, the embankment is crammed with locals who come to walk, roller-skate and ride bikes. Another unique feature of the embankment is its popularity with wedding parties; you meet them everywhere as they pose for pictures against the Volga background or just stroll. It seems that half the city is getting married.

As for souvenirs, we can recommend ceramic tiles produced by local craftsmen and featuring fairytale scenes and symbols of Old Russia. The tiles make very decorative wall hangings.

It takes six hours to get from Moscow to Nizhny Novgorod by train. A boat trip will be longer, at least two days, but it is certainly worthwhile. You will see the incredibly beautiful spot where the Oka River flows into the Volga, a fitting location for the Byzantine style Alexander Nevsky Church. From the river terminal, visitors have to climb to see the local Kremlin, built in 1511. Unlike the Moscow Kremlin, this one can be roamed freely and you can walk a whole day here. Indeed, the city center invites strolling.

Take a walk along Pokrovskaya Street, a pedestrian thoroughfare stretching for more than a kilometer and lined with ornate old mansions, housing cafes and shops on the ground floors. It is a real pleasure to walk here. There are also several observation platforms affording breathtaking views of the Volga. In fact, the city owes its wonderful views to Emperor Nicolas I, who visited twice. It is thanks to him, or rather to his carriage becoming stuck in the mud that neatly paved streets were built to facilitate entry into the upper, central part of Nizhny Novgorod. The tsar also ordered turning the city's face towards the river, which gave it its stately appearance.

In those times, Nizhny Novgorod was called "Russia's pocket" due to its famous fair, with its annual turnover estimated at a whopping 150 million rubles, or half Russia's trade volume in the 19th century. Rubles were far more valuable than now, with a house available for 10 rubles.

Local merchants were surrounded with legends. Once they raised 250,000 rubles to help Afghan colleagues who lost their merchandise in a fire, asking for no other guarantee than a word of honor. A year later the Afghans repaid the loan: a merchant's word was worth more than promissory notes.

Nizhny Novgorod is famous for its khokhloma tradition. Gaily painted red, black and gold wooden items are considered typical Russian souvenirs, along with matryoshkas. Given the use of lead based paint, these implements should not be used in cooking but they make excellent decorations.

Kazan was annexed by Tsar Ivan the Terrible in the mid-16th century. Since that time two religions, Orthodox Christianity and Islam, have coexisted peacefully here. Tatarstan offers a shining example of religious tolerance, with Russian-language services available in mosques and Tatar services in churches. Why quarrel, just choose what you like best. The city also has a Kremlin which, unlike its Moscow and Nizhny Novgorod counterparts, is white in color and built from white local limestone. Inside the Kremlin stands the elaborately decorated Kul Sharif mosque. This is the main Muslim center of worship not just in Kazan, but in the whole of Tatarstan and for the whole of Russia's Tatar diaspora. Legend says that its architecture - a cupola with four minarets - inspired the designers of Moscow's St. Basil Cathedral, which was built to commemorate Kazan's accession. The Kul Sharif complex also houses the Islamic Culture Museum and a museum of ancient manuscripts. The mosque itself is decorated with stained glass featuring all the 99 names of Allah. Though this is a working mosque, it is open to tourists, including women. Not far away stands the Orthodox Cathedral of Annunciation. Its first version was built under Ivan the Terrible.

From the Kremlin begins Kazan's central pedestrian street, named after the revolutionary Nikolai Bauman. This is similar to Moscow's Arbat. You can walk here all day long, dropping into cafes and shops. If you fancy Tatar cuisine, try the Tatar Culinary House. If you are in a romantic mood, opt for the Shalyapin restaurant next to the identically-named hotel, located in a beautiful old mansion.

The Volga trip can take from three days to three weeks. Each of the cities on the Volga is worth visiting for several days, especially given that there are pleasant 3 to 5 star hotels and an abundance of cafes and restaurants. Also, it is a wonderful opportunity to see that Russia is much more than just Moscow and St. Petersburg.

One of the most famous foreign travelers to take the Volga voyage in the 19th century was French writer Alexandre Dumas. In 1858 he visited Kazan, Nizhny Novgorod, Saratov, and Astrakhan, receiving a hearty welcome everywhere. The Volga expanses, its picturesque banks, old cities, colorful villages and piers made a strong impression on the French writer, leaving bright and unforgettable memories. "Once you have been recognized and issued with recommendations, traveling in Russia becomes some of the most pleasant and cheapest I ever knew," Dumas wrote.

He was surprised that well educated Russians knew works by Victor Hugo, Honoré de Balzac, Alfred de Musset, George Sand, and other French writers. In Nizhny Novgorod he met Decembrist Ivan Annenkov and his wife Polina, the prototypes for the characters in his novel Le Maître d'Armes (The Fencing Master).

Another unforgettable adventure was a hare hunt in Kazan's suburbs, which was Dumas' longtime dream. His Russian friends negotiated with the ship captain, delaying the departure by a day and thus allowing the celebrated novelist to satisfy his hunting passion. The hunt was a rare success. "Even hares are polite in Kazan," Dumas joked at dinner.

The Russian experience had a direct impact on Alexandre Dumas, who became an active promoter of Russian literature in France, translating into French Alexander Pushkin's novels The Shot, The Blizzard, The Undertaker, Mikhail Lermontov's verse Mountain Peaks, and Ivan Lazhechnikov's novel The House of Ice, as well as a number of works by poets Nikolai Nekrasov, Alexander Bestuzhev-Marlinsky, Kondraty Ryleyev, and others.

Dumas' travel notes helped destroy the old stereotype of Russia as a backward country with an ignorant population and tyrannical authorities. The French novelist visited Russia on the eve of the great reforms of the 1860-1870s, which gave a powerful impetus to the development of the country's economy, culture and education in the second half of the 19th century.