The reformer of the Bolshoi at the Kennedy center 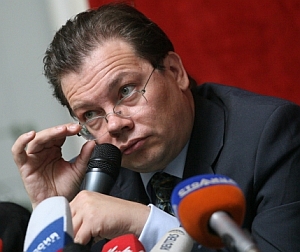 Aleksander Vedernikov (45), the Russian conductor who became famous for his efforts to introduce reforms at the Bolshoi Theater, where he was chief conductor for eight years, performed three concerts of Brahms and Prokofiev at The Kennedy Center with the National Symphony Orchestra in Washington D.C. The tickets were sold out and the reception was warm.
He was joined by violonist Vadim Repin, another Russian musician with vast international experience. For Vedernikov, it was his first experience working with an American orchestra, though he had previously performed in the United States with the Russian National Orchestra, and London Philharmonic Orchestra.

"I was tired of the constant fight with bureaucracy and inefficiency, - he said, "but feel comfortable with my move to Denmark, after all it is only two hours flight from Moscow, and the Danes value classical music."

"Vedernikov worked very hard to change the old fashioned style of the Bolshoi and bring a new breath of life into the musical style of the theater. He left a year after the Chief of the Ballet of the Bolshoi Theater, Aleksey Ratmanskiy, also resigned with dissatisfaction and moved to New York. The perspectives of the new company model that will follow up are hard to predict. According to Russian traditions, a prosperous theater must always have a prominent artist on the top, and the Bolshoi now is submerging into a scandal related to fraud and abuse with the renovation of the old scene," said a source close to the Bolshoi, who preferred not to be named.

Along with acclaimed composer Leonid Desyatnikov and writer Vladimir Sorokin, Vedernikov staged the controversial opera "Children of Rosenthal." The opera was subject to an attack by the Nashi youth movement for "an attempt to ruin true Russian opera."

The Children of Rosenthal is based on a fictional Soviet-Russian story of four children who are the clones of famous composers Chaikovski, Musorgski, Mozart and Wagner, and are produced by the Soviet genetic scientist Professor Rosentahl, embraced by Stalin and condemned by Gorbachev and Yeltsin. After "perestroika" and the death of their father, the children of Professor Rosentahl lose their privileged status and find themselves on the outskirts of life by joining the criminal underworld.

While still at the Bolshoi, Vedernikov put on stage about 12 new productions, including "The Flying Dutchman," "Boris Godunov," an internationally heralded "Eugene Onegin" and several others. In January 2008 and July 2009, Vedernikov received a warm welcome for the Bolshoi Choir and Orchestra in the legendary Theatro della Scala in Milan, Italy.

As a guest conductor, Vedernikov appeared in Canada, Japan, UK, France, Australia, Germany and Scandinavia. Vedernikov was born in Moscow into the family of organist Natalia Gureyeva and opera singer Aleksander Vedernikov Sr.