The road to atonement 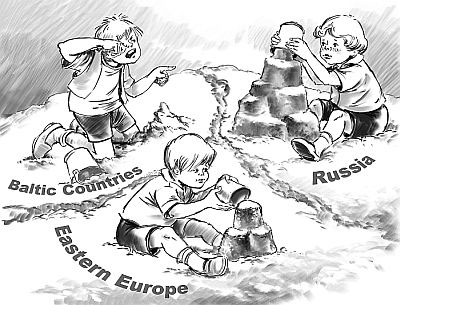 It took place in a crowded Bratislava café. I was seeing a Slovak journalist who'd recently spent several hours with Alexander Solzhenitsyn, although that detail is irrelevant here. What is relevant is that this was October, 1968, and we were conversing, I with my usual boom, in Russian, our common language. "Please," my friend entreated, "Please keep your voice down." The recent Soviet strangulation of Socialism with a Human Face, otherwise known as the Prague Spring, had caused many Slovaks as well as most Czechs to detest the Russian language, all the more because they were compelled to learn it in school.

Incidentally around 1968, an anecdote briefly popular under Gorbachev would mock the Kremlin for crushing what was probably the last possible attempt to make socialism work. Question: What's the difference between Socialism with a Human Face and perestroika? Answer: Lemme think...ah...um...19 years." But national folly that reaps the opposite of national aims is another story, far from exclusively Russian.

As for the Soviet Union and its neighbors, I learned only later some of the gruesome particulars of the even more savage repression of the Baltic countries that began in 1939 and resumed after the end of World War II: The crippling of the Latvian, Lithuanian and Estonian intelligentsia and rupture of countless families by sending "enemies of socialism" into ghastly exile where hundreds of thousands of deaths were inevitable. Few residents of those countries did not suffer, many grievously, under the occupation by the Red Army that, using gulags and murders in the service of Sovietization, sought to suffocate genuine national instincts and identity.

Today's Russians have reason to resent Europe's failure to express fitting gratitude for the chiefly Soviet victory in World War II that saved the continent from the unimaginable pain and degradation of Nazi rule. That may well apply especially to Eastern Europe, which was already under occupation. At the same time, living Russians, still misled as they are by the current Kremlin's insistence on twisting history, know too little about why Eastern Europeans feared the Red Army's advance on its way to Berlin. Feared and loathed it for what the Soviet Union already did to their countries before Hitler's armies had swallowed them. Hated it with sustained passion during the 46-year postwar occupation that sometimes eased somewhat but ended only with the collapse of the U.S.S.R. in 1991.

That repression is undeniable. The briefest visit to former Soviet satellite countries confirms that the tricky questions Russian officials attempt to pose about who was responsible for not preventing or stopping Hitler's eastward march only make things worse. Real life, to use a term much liked by Soviet propagandists, gave the overwhelming majorities of their populations a profoundly unhappy memory of the supposed fraternal relations with the Soviet Union and a matchingly powerful wish to be protected against possible future Russian domination.

Why doesn't Moscow acknowledge the old injustices? Instead of trying to justify the Soviet wrongs all these years later, why doesn't it apologize, as Germany has for its 20th century atrocities? Can't it see that would help improve its relations with the Eastern European countries that sometimes rub in the salt by talking more about Soviet crimes than Nazi ones - not only because the Soviet ones were more recent, but just because Germany has admitted, and to an unprecedented degree atoned for, its behavior under Hitler?

Maybe too little time has passed. The real German apologies came only with the late 60s youth whose various revolutions of the heady period included challenging earlier generations. Before that, "where were you during the war, Papa?" was virtually never asked because people didn't want to know, therefore the crimes were almost never mentioned. Besides, Germany is almost alone in trying to deal honestly with the outrages of its past. America hasn't followed, let alone led, so who am I, born there, to advise Russians to apologize? Will we ever properly do that for our treatment of our African slaves and Native Americans?

Still, if Moscow would like to swallow hard and follow the German example that made possible genuine reconciliation, precious little time remains. The real reckoning with the truth of Germany's terrible past that marked the country's return to higher civilization began some 25 years after the Third Reich crumbled. The Russian Federation replaced the Russian Republic of the U.S.S.R. roughly 20 years ago, since when we've heard only self-serving justification rather than apology. How good if President Dmitry Medvedev's very recent urging to remember Stalin's purges were a start, even though he, as usual, spoke only of Russian victims.