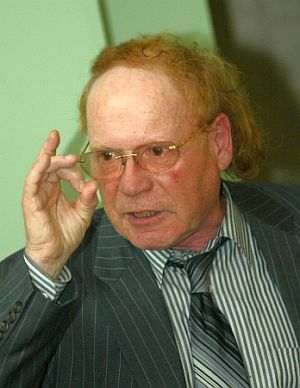 In the early 1990’s, when Edward Radzinsky began writing his biography of Stalin, people told him that only grandmothers would read it. To this Radzinsky replied that by the time he finished his book, Stalin would be back in the limelight. Radzinsky finished his portrait in May 1995, on May 9, to be exact. In Moscow it was Victory Day, the fiftieth anniversary of the triumph over fascism, and 50,000 communists were marching through the streets. And for the first time since his death, portraits of Stalin fluttered above the procession.
But in 1995, admiration for Stalin was in evidence only on the margins of society. No one could have imagined then that less than fifteen years later Stalin would win a popularity contest on TV. Viewers had been asked “to choose the most prized name in Russian history”. To the complete surprise of the contest’s organizers, the viewers’ top choice was Stalin.

Why after writing a biography of Stalin did you decide to write a novel about him?

After my documentary biography of Stalin sat for weeks on the bestseller list, and more that a million copies were printed, I decided to write a novel.

I spent ten years writing it. It is an historical novel, historical because it is based on diaries. One of these diaries was written by a man who was close to Stalin his entire life. The life of this man was a tragifarce since Stalin would periodically imprison him, and then release him. What’s more, each time Stalin had him put in prison he watched over him to make sure that he wasn’t completely destroyed in the camps. Stalin needed this man — he was a childhood friend, a witness to the grandiosity of his life. After he had released the man from the camps, Stalin would let some time go by and then summon him. And again the man, with a new set of false teeth to replace the ones that had been knocked out in camp, would go to Stalin and they would meet as though nothing had happened. They drank wine and reminisced about their native Georgia and about friends who had been destroyed… by Stalin! And this man would go back to carrying out Stalin’s most secret assignments until his next arrest.

My new novel about Stalin is about what happened according to documents and about what might have happened. For instance, the meeting of Stalin and Hitler, which, as American sources rightly say, took place in October 1939.

How did Stalin turn into such a terrible dictator, do you talk about that in your novel?

That’s exactly what my book is about. How a small boy who dreams of becoming a priest turns into a revolutionary and terrorist whose Party nickname is Koba, and how Koba turns into the ruthless dictator Stalin.

Stalin spent 38 years as an underground revolutionary. What had he known, what had he seen by his fortieth birthday? Prison and exile. And then in his fifth decade he became ruler of half the world. This man for whom prison and exile were home. So the GULAG, the prison state within a state was in his subconscious.

He had contempt for people. He treated people like pathetic irrational creatures entangled in their human weaknesses. For him as a revolutionary, money and riches meant nothing. He despised ordinary people for whom money, titles and honors were important. He made sarcastic remarks about the famous writer Gorky: “We’ll tie up comrade Gorky with the ropes of his ambition.” Stalin also said: “People are like the pebbles in the ocean, very easy to roll smooth.” Ruthlessly rolling people smooth and turning them into homo sovieticus was Stalin’s single-minded vocation.

Stalin believed that the Russian people did not need freedom, but did need equality. Equality in subordination, equality in hard work and meager needs.

But to create that society he needed to get rid of those who were tied to yesterday’s life, tied to the past and to the old world. That was the principal meaning of Stalin’s Terror. Stalin remembered the words of Lenin, who joked that revolutionaries over the age of fifty should be shot because they become a drag on the idea for which they gave their whole life. For Stalin, the old Bolshevik Party, which remembered the time of furious and free discussions, the declarations of the opposition, which remembered the time when Stalin was Lenin’s shadow… Such a party was impossible. And Stalin, who knew how to finish what he had begun, acted revolutionarily — he destroyed almost the entire old party.

The personality of Stalin is still popular in Russia. What is the basis for this irrational love?

It is very rational. The Russian people’s main idea is equality. Our great philosopher Berdyaev said that for Russians the main thing is not reproduction and creativity, but equalization and distribution. To share and share alike, to dispossess the Cossacks, dispossess the kulaks, the oligarchs: that is our national dream.

In recent years Russians have encountered a system that it had considered paradise — capitalism. They saw this capitalist paradise in James Bond movies: the stores had everything, foods and all sorts of stuff. Just walk in and buy it! You could travel to any country. Well, now we have this paradise. And the stores really do have all sorts of things, but there isn’t the money to buy them. Russians are now face to face with what they most hate: inequality. There’s a Russian saying: “An honest day’s work won’t buy you a palace.” In Russia, if a man is rich, it means he’s a thief. A huge group of people that has not had access to the luxuries of capitalism is indignant. These people have begun to remember how everyone lived the same modest life in the old days. Even Stalin was modest. He always wore the same military jacket, the same boots and had just one government-allotted dacha. True, these people have forgotten that besides the patched boots and old military jacket Stalin owned the whole country. And surveying this bacchanalia of wealth to which Western eyes are accustomed but which Russian eyes hate, people say: “If only Stalin were with us!”

But young people too have a favorable view of Stalin.

The new generation has heard about the great empire that occupied one sixth of the earth’s land mass and which everyone feared. This empire ran half of Europe and Asia, the half then known as the socialist camp. This Empire was founded by victor-over-fascism Joseph Stalin. That’s what young people today have heard. As for his heinous crimes and the millions of people incarcerated in camps, they think it’s made up. During his lifetime Ivan the Terrible was known among the people as “the Torturer”, he spilt so much blood. But as our 19th century historian Karamzin remarked, after Ivan’s death his moaning victims fell silent. The documents concerning his evil deeds gathered dust in government archives while new generations saw only the monuments to his might and great victories. Gradually in the popular consciousness the sobriquet “the Torturer” was replaced by “the Terrible”, a name highly respected in Asia. But history has a better memory than people. History remembers the Torturer.

In time Joseph Stalin too will receive from History the name he deserves: the Torturer.

Do you think that only Stalin could have triumphed over fascism?

This for me is a very depressing question. Yes, thanks to Stalin we were not prepared for war. But only such a ruthless dictator could have gotten us out of that impossible situation and beaten Hitler. For this History needed Stalin. No one else could have fought so uncompromisingly and barbarically, shooting his own soldiers when they fled the battlefield, throwing millions into the mousetrap of encirclement while a combat-worthy army was being created in Siberia. For Stalin human life was not a value. For him only victory mattered. And he was victorious.

Russians tend to like a strong hand in power. Or is that a myth?

Our country lived under the Tatar yoke then under the horrible Moscow tsars, who thought of the country as their personal property. It was easier to imagine the country without people, than without a tsar. Then came the Romanovs and their cruel, iron autocracy. They implied that a ruler must be harsh or he is not a ruler.

In a thousand years in Russia there were three months of freedom — after the February revolution of 1917. Then began the autocracy of the Bolsheviks. Now, for the first time, we are again living in freedom. A new generation is growing up that will not understand any other way of life. They will have other aspirations. But for now we are still born of the past. We feel more secure when a strong man is in power. We are now living through a tsarist democracy. It was founded by Boris Yeltsin. He was capable of attacking his own country and firing on his own parliament. That is how tsars conduct a dialogue — they give orders and don’t discuss anything. If the American president were to order the dollar to stop falling, he would be put in an insane asylum. During our 1998 default, Yeltsin ordered the ruble to stop falling. And the ruble froze. True, for only three days.

But Yeltsin was also a democrat since he was willing to tolerate vilification from our mass media.

My novel about Stalin is about the country behind a strong iron curtain that has disappeared, about daily life under the axe, about the Byzantine customs in the Kremlin as well as in communal apartments where unwashed people lined up every morning outside the door of the bathroom and the W.C. When the KGB arrested one of them, their neighbors pretended that nothing had happened. Everywhere was the mass, the collective, the anthill. Everything was done collectively. There was a collective at work and at home. (The overwhelming majority of apartments were communal.) A collective during one’s leisure hours — Sunday excursions into nature. Collective holidays — Miner’s Day, Builder’s Day, Metallurgist’s Day. Every profession had its holiday so that on that day the respective collective could drunkenly celebrate (together) to its heart’s content.

Parks of culture and leisure were created all over the country. There specially trained organizers would lead people in popular and recreational activities (again, collectively). Everything was collective. This constant mass character, this dissolution of the individual in the collective brought about what was desired — a collective conscience. Personal responsibility died, only collective responsibility remained: “those are the Party’s orders”, “those are the country’s orders”. The collective conscience helped people to quietly enjoy life during the worst terror. And woe to the person whose personal conscience was awakened.

This phantasmagoric life, this sunken Atlantis, is in my novel.