How the British live in Moscow 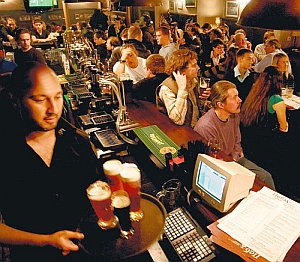 From Elizabethan traders to multinationals and sausages, the British have long had a presence in Moscow. Phoebe Taplin, a British journalist and Muscovite, looks at the connections and describes some of the influences British expatriates have on life in the Russian capital.

An old whitewashed house with a wooden roof on Varvarka Street near Red Square was the residence of the first English envoys to Russia. Sent by Elizabeth I to Ivan the Terrible, the Muscovy Trading Company used this house from the mid-16th century. English merchants exchanged firearms and gunpowder for fur, honey and caviar. The Romanov Tsar Alexei, shocked by the execution of Charles I, expelled them in 1649.

The palatial "English Club" (now the Museum of Modern History) was described by Captain Charles Colville Frankland who dined there with the Russian poet Alexander Pushkin in 1830. It was "a splendid establishment"; only the name was mystifying since "hardly any Englishman belongs to it", and "no English newspapers are taken".

By the late-19th century, there were a number of British businessmen in Moscow. TsUM, the grey gothic department store behind the Bolshoi Theatre, was built in 1900 for two Scotsmen, Andrew Muir and Archibald Mirrielees. Mirrielees said of the expat community in Moscow: "A more hospitable set I never met with." The playwright Anton Chekhov shopped regularly at TsUM, and even named two of his dogs after the owners. The Soviet era was naturally a fallow period for foreign entrepreneurs, but several businesses were quick to seize the new opportunities offered by the demise of Communism.

In 1998, the British Business Club was founded to discuss and share information, particularly "business activities alien to the British norm". Its membership represents nearly 500 companies, and the regular gatherings on the last Thursday of each month are a useful networking event, as well as a social occasion. Their annual charity "Trafalgar" Ball is being held on October 24 in the Marriott Grand Hotel, with the St Andrew's Society Ball coming up later in the year. The Business Club is one of the few groups in Moscow to mark St David's Day in style, although in previous years, the group SWS (the "Social Welsh and Sexy Society") has held St David's Day parties at the British embassy.

You still can't get Marmite or PG Tips, but it is possible to find the full British pub experience in Moscow - at a price. There are quite a few places calling themselves Irish pubs, too, and the Tinkoff Brewery opposite the British embassy is understandably popular. John Bull's pub near Smolenskaya Metro serves real English ales (and overpriced fish and chips). Complete with authentic-looking furnishings and a Union Jack-clad cloakroom attendant, it is certainly one place to drive away homesickness for a couple of hours. The "Molly Gwynn" chain, run by the same company, advertises itself as "your new local".

John Warren's sausages are an essential part of many expatriate gatherings in Moscow. Since 2004, the British entrepreneur has delivered Newmarket or pork & leek sausages - and even haggis - to hotels, restaurants, homes and parties throughout the city. Starting out from his kitchen table, the business has grown into something special, but it could all have been very different. Back in 1993, Warren - then a grain trader - survived a bullet in the neck from a security guard at Moscow's Vnukovo airport.

You can usually find John Warren serving sausages each year at the Queen's birthday party, celebrated in Moscow, as at virtually every other British Embassy around the world, with Pimms and strawberries on the lawn. The 2008 party included a steel band and a double-decker bus in an attempt to showcase Britain's attractions.

Relations between Britain and Russia have been... well, interesting. From Ivan the Terrible's anger when a relative of Elizabeth I refused to marry him, to the Cold War and beyond, there have been tensions, but also surprising alliances. Several English and Scottishs soldiers joined the Russian army. One of these, Scotsman George Lermont, was the ancestor of the celebrated Russian poet, Mikhail Lermontov.

The beautiful old British Embassy buildings, on the bank of the Moskva River opposite the Kremlin, are still being renovated. The new buildings, on the Smolenskaya Embankment, and the Ambassador's Residence near the Arbat are the venue for regular gatherings of the expat community, including drinks for the British Women's Club and their partners. The BWC has regular coffee mornings at the Embassy and in nearby cafes. Claire Allbeson, co-chair of the BWC describes the club as a great place to "meet new people, see friendly faces, speak English and feel welcomed".

The British ambassador, Anne Pringle, opened the annual fete at Moscow's only Anglican church, St Andrew's, last month. The red-brick church on Voznesensky Lane was built in the 1880s by an architect from northern England. For the 19th-century British businessmen who funded it, the church became the centre of social life, and it plays a similar role for many expats today. In the Soviet era, the church became a recording studio. The parsonage next door was built by Scotswoman Jane McGill, along with a nearby hostel to accommodate British governesses in the city.

The well-equipped Anglo-American School, founded in 1949, is still the expat-parent's school of choice: other schools struggle to match the array of theatres, swimming pools and playing fields. The unruly teenager of the anglophone educational scene, the British International School, is now 15 years old. With a plethora of campuses across town and a high staff turnover, experiences differ. Many British parents now opt for the International School of Moscow, opened two years ago by a British husband-and-wife team. The English International School, to the east of the city, also has a small, contented clientele. For younger kids, the British Embassy runs its own playgroup.

The fact that British football teams can be owned by Russian oligarchs has helped put the game firmly onto the agenda. Luzhniki Stadium has been the venue for several high profile matches, including the Champions League final in 2008 between Manchester United and Chelsea, and qualifying matches for the 2010 World Cup.

Among the largest gatherings of expatriates in Moscow, are the annual series of matches played by the kids' football league, sponsored by the British Council, as part of their "Football Unites" programme. Parents socialise on the sidelines and eat the ubiquitous sausages.

Other traditionally non-Russian sports, such as cricket and rugby, are taking off in Moscow. There is even a Moscow School of Scottish Dancing, started by Irene Mackie in the Nineties. In an article for Passport magazine, Dominic Esler describes how the school's teachers make repeated trips to St Andrews to qualify for their Royal Scottish Country Dance Society certificates, and shop for sporrans and skean dhus.

British culture is well represented across Moscow. Bands and singers, from the Manic Street Preachers to Elton John, have played concerts here. Ballets by iconoclastic choreographer Matthew Bourne, and plays from theatre companies such as Cheek by Jowl have appeared in Moscow's International Festivals. Tom Stoppard's Coast of Utopia trilogy has opened for its third season in the Youth Theatre next to the Bolshoi. The play's translator, Arkady Ostrovsky, describes the Russian production as "calling back Russian thinkers from their exile".

In 2008, the British Council brought some great shows from the Edinburgh Fringe Festival to the Meyerhold Centre, where they played to packed houses, while the recent Biennale of Contemporary Art at venues across Moscow included major artworks by British artists such as Bombay-born Anish Kapoor. This kind of event makes modern Moscow an exciting place to be, full of collaborations and fusions that represent the best of both cultures.