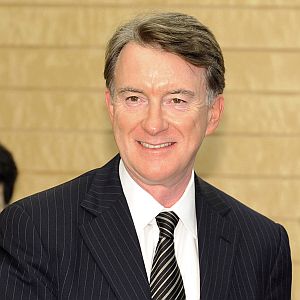 Britain is the largest foreign investor in Russian business – a trend which, while dented by the global financial crisis, still looks set for a promising future. The UK business secretary, Peter Mandelson, spoke to Russia Now’s London editor about prospects for further co-operation and development of mutual interests.

On the eve of David Miliband's visit to Moscow, the Financial Times wrote that during the last three years, relations between Britain and Russia have probably been the worst of all Western countries. At the same time, the British-Russian business relations remained at a very high level and are seen almost as a role model. How could one explain such a striking gap between the political and the trade-economic relations with these two countries?

As a former EC Trade Commissioner, my view is that trade and politics go hand-in-hand. The thriving trade between our two countries illustrates that the UK and Russia have many common interests.

Around the globe, it has been a difficult year, but one of the lessons we have learnt is just how interdependent we are. In the globalised world, no modern country can survive in isolation, we are all reliant on one another. Trade is one of the forces that links nations. We cannot be complacent, but after a forecast fall in global trade of more than 10pc this year, it looks as though the situation is returning to normal.

As it does so, and as economies return to growth, entrepreneurs in both of our countries will be looking for opportunities to do business. My job is to ensure that they have the conditions to do just that. The UK Government will be helping UK firms to look for partners in Russia.

I also want Russian firms to know that the UK can help them to achieve their business ambitions. London is the number one financial centre in the world. We have a range and depth of financial and professional services – from stockmarkets to bond markets, and from insurers to lawyers – that are top of their class.

You have admitted being a keen Russophile, committed to improving relations. What is attractive for you in Russia?

This month President Medvedev and Prime Minister Gordon Brown stood together with other European leaders in Berlin remembering 1989, when the Wall came down and the world changed. That was the year I entered the British parliament. In the last two decades, I have been to Moscow on a number of occasions, and each time I am struck by the rapid pace of change and how the country is being transformed.

I am a huge Russophile. I deeply admire Russia’s resilience and can-do attitude. I see the great potential that is being realised. I admire Russia’s world-class cultural scene.

Russia is an important partner for the UK and central to all the main global issues. We work together in the G8 and the G20. We are both permanent members of the UN Security Council. The UK supports Russia’s plans to join the World Trade Organisation. And the UK and Russia will have an opportunity to make progress towards our common interests in Copenhagen in December. Taking action on climate change is vital for the future prosperity of not just our two countries, but the rest of the world too.

What can be done to improve relations with Russia in general – not only in commerce?

I think as we work together, we achieve an ever greater understanding. Trade between UK and Russian firms grew last year to £10.7bn. The overall business climate has been more difficult this year, but the UK remains the largest foreign investor in Russia. I believe that trade can grow from this strong position.

Other areas of common interest include Iran and non-proliferation, and ensuring respect for human rights, the rule of law and democratic institutions. Next month, the focus will be on climate change and energy efficiency. Preventing energy from being wasted is not only good for the environment, it also helps businesses that would otherwise have to pay the fuel bills, and it conserves resources for future generations.

That’s why it was most welcome that my cabinet colleague Ed Miliband signed an agreement on energy efficiency and renewables with energy minister Sergei Shmatko in Moscow last month. The Confederation of British Industries and the Russian Union of Entrepreneurs and Industrialists are also cooperating on energy efficiency.

At the people-to-people level, I think you’ll find that there is huge interest in the UK from the grass roots up in finding out more about Russia. Large numbers of British tourists come to Russia every year. And with four out of six of the world’s top universities in the UK, we have many Russian students studying here. I would hope to see many more in years to come.

At a recent joint press conference with Mr Alexei Kudrin, you said that British business leaders, while having some concerns, none the less stress that they find trading with and investing in Russia notably easier to do than with other countries. What makes Russia easier than other countries to deal with?

We have many success stories that illustrate the potential of doing business in Russia. There are well-known UK firms in Russia such as JCB, HSBC, Rolls-Royce, Marks & Spencer and Monsoon, but also smaller firms such as Scot West Seafoods that exports to Russia from the west coast of Scotland. In total, more than 1,000 UK companies are already established in your country. Deputy prime minister Kudrin noted that among them were companies that were doing extremely well.

UK Trade & Investment (UKTI), the government body that helps UK firms to export and Russian firms to invest in the UK, looks to match UK firms with Russian partners and vice versa. Any firm entering a new market for the first time will be concerned about issues such as red tape, language or local customs, but UKTI has experts who can turn an interest into successful business.

Our view is that there are great opportunities in Russia. These include areas such as infrastructure, energy, high technology and financial services.

At the start of this year, in the middle of the financial crisis, it was being said that the era of the Russian oligarchs was over. In particular, the media speculated that the Western investors, including the British big business, were going to switch from dealing with Russian private companies to the state owned companies. In other words, not knocking on oligarchs’ doors, but on the doors of the government officials. Do you consider such a tactic and approach more effective?

British businesses engage with a broad cross-section of both business and government figures in Russia. We are keen to expand links between Russia’s rapidly developing SME sector and our own. The UK has more than 4m small and medium-sized enterprises, and 90pc of the firms that we help to export will fall into this category. These will be firms that trade with a broad spectrum of partners, from state-owned to privately-run businesses.

What can the British business and Russian business learn from each other?

At the Inter-Governmental Steering Committee meeting, we were looking at exchanging experience and cooperation on a wide range of issues. Thriving small and medium-sized firms are essential to the long-term health of both of our economies and tens of million of people rely on such firms for their livelihoods. We looked at ways to strengthen these firms, to cut bureaucracy, and to ensure that they can continue to generate wealth.

For businesses to thrive and grow, they need finance. We have a history of Russian firms using the UK’s bond and share markets to raise the funds they need. Our legal and professional services are also strong and I’m aware that many big UK names are well-established in Russia. The UK is keen to help Moscow develop as an international financial centre.

Both Russia and the UK have world-class scientists, and we want to share experience in fields such nanotechnology. We have firms that are using this technology to light up cancer cells, to tackle heart disease and produce lightbulbs that can last for 60,000 hours. To give an idea of the scale at which these products operate, one human hair is 80,000 nanometres thick. I was pleased to see that a RUSNANO delegation attended the UK NanoForum in London where 400 of the top UK nanofirms were on show.

With London 2012 and the Winter Olympics in Sochi in 2014, we have a common interest in ensuring legacies for the Olympic Games. In June, trade, investment and small business minister Lord Davies signed a Host2Host agreement on this in St Petersburg that will help to create business opportunities.

I think this month’s meeting of governments and businesses added new depth and drive to relations between the UK and Russia. The potential for cooperation is huge. Russia is changing and growing and UK firms are keen to help.