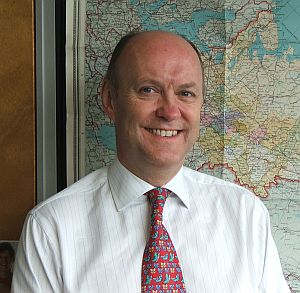 Dalziel is executive director of the Russo-BritishChamber of Commerce. He has been involvedwith Russia in various capacities since his firstvisit to the USSR in 1974

I suppose it is in the nature of the subject, but we don’t really appreciate history until it has become, well, history. In other words, even when we live through events which alter the course of history, we often fail to appreciate their full significance until some years later.

That thought was uppermost in my mind at the beginning of November. On November 9, Berlin, Europe and much of the world celebrated the 20th anniversary of the fall of the Berlin Wall. Now, you may say – especially if you are old enough to remember it – that everyone realised at that time that this was history in the making.

It was, of course, one of those earth-shattering moments that clearly meant a huge change to the previous status quo. But so much had happened already in Eastern and Central Europe in 1989 that, somehow, the enormity of the moment when the Wall opened took some time to sink in for everyone but the East Germans. No one knew then that, by the end of the following year, Germany would again be one country; or that a year after that, the Soviet Union would no longer exist.

To put the events into a personal context, I cannot remember where I was and what I was doing when the Wall came down. I do, however, remember vividly President Kennedy’s assassination in 1963 (when I was just six) and the attack on the Twin Towers on September 11, 2001. Perhaps it was because, as a BBC correspondent, I had already reported so many stunning events in 1989, that there was a certain logical progression to the fall of the Wall.

The relevance of these lessons of history surrounds a significant week in early November for Russo-British relations. On November 1, David Miliband, the British foreign secretary, visited Moscow. And, just four days later, the Russian finance minister, Alexey Kudrin, was in London for the meeting of the Russo-British Inter Governmental Steering Committee (ISC).

No one would pretend that these two visits are, or will be, of the same global significance as the fall of the Berlin Wall. But each was significant, and may yet prove to be historic. Mr Miliband was the first British foreign secretary for more than five years to visit Moscow. The ISC was meeting for the second time in just over a year; however, the first, when the British co-chair of the committee, Lord Mandelson, went to Moscow in October 2008, was the first meeting of the ISC since 2002.

If we do not always appreciate that we are living through “history”, predicting what will become history is even more difficult. It would have been nigh on impossible to anticipate the deep freeze into which Russo-British political relations were to fall when the Russian president of the day, Vladimir Putin, became the first Russian leader to pay a state visit to Britain since Tsar Alexander II in 1874.

At that time, the Prime Minister, Tony Blair, boasted of his close personal relationship with the Russian president: Britain was set to become the biggest single investor into Russia, thanks to oil and gas deals signed by BP and Shell, and some of Russia’s biggest companies had prominent British figures as non-executive directors on their boards of directors (for example, Lord Owen was a non-exec of the Yukos oil company).

But later that year, relations started to sour. Mr Putin launched his attack on oligarch Mikhail Khodorkovsky, and on his company, Yukos. Over the next four years, matters went from bad to worse. Political sniping began on both sides (among other things, Russia accused Britain of using an electronic rock as a dead-letter drop for spies); former KGB man, Alexander Litvinenko, was murdered by radiation poisoning in London; and there were tit-for-tat expulsions of diplomats.

Only the trade relationship prospered, underlining that, even in the most difficult of times, businessmen can be pragmatic. Whatever mud was being slung between the Kremlin and Downing Street, the axiom “business is business” shone through. From 2006 to 2008, Britain was the biggest single investor in the Russian economy.

Relations seemed to hit a new low in August 2008, not just with the UK, but with the West in general, when Russia became embroiled in a war with Georgia. Russia may have won the battle, but it lost the public relations fight in Western eyes.

Russia was brought back into dialogue with the West, partly because of the economic crisis. It had already been felt around the world, and then, suddenly, it hit Russia hard in September 2008. Russia had been saying for some time that it was integrated into the world economy, yet there had been some crowing over the fact that the crisis had not been felt in Russia. Now that it was, it hurt; and the voice of reason dictated that Russia had a much better chance of pulling out of the crisis if it co-operated with the West.

Coincidences can often affect the course of history, too. A visit to Moscow to revive the ISC was already planned for the end of October 2008; but this was given a huge boost when Lord Mandelson was appointed as secretary for business, as his relationship with the Russians had been very good when he was EU commissioner.

Fast forward to November 2009: the second meeting of the ISC takes place in London in the same week as the British foreign secretary makes a long-overdue visit to Moscow. Is this history in the making? We have to wait and see. If the Russian foreign minister, currently Sergei Lavrov, makes a return visit to London in 2010, another box will be ticked in the “improving relations” file. (He may decide to wait until after the UK election, but that would simply show that, like businessmen, politicians can be pragmatic, too.)

The crucial thing with the ISC is not just that it meets: the ISC is supposed to listen to the needs of business – and then act upon them. Each government is meant to follow up the ideas put before it by the business groups represented at the meeting, and take practical steps to improve the climate for business between the UK and Russia.

If action is taken in the weeks and months ahead, which sees not only increased business between the two countries, but an improved climate for business, then the first week of November 2009 will go down as a significant moment in the history of Russo-British relations.