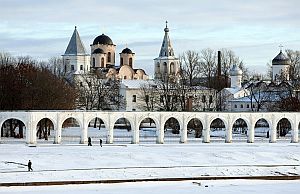 “Russia’s oldest city, cradle of Russian democracy, medieval centre of trade and crafts…” This is how Veliky Novgorod’s tourist centre describes the historic town, which celebrated his 1,150-year anniversary last month. In 859, a fortress was first recorded here, at a key point on the trade route that ran from the Baltic to the Mediterranean, linking Scandinavia with the Byzantine Empire.

Present-day Veliky Novgorod, or “Great” Novgorod, is a quiet, unspoilt place with its broad river and autumnal avenues. The surrounding countryside is easily accessible and is studded, like the town, with tall churches. Visitors who appreciate the beauty of simplicity are drawn to the whitewashed walls of these holy places. Inside, many of the old frescoes have been restored; outside, the flat marshlands, woods and water meet the sky.

Novgorod has forged links with other cities, hosting a meeting of modern Hanseatic League this summer. Novgorod was always ethnically diverse and rivalled medieval Venice in its far-flung trading links. Today, there are international events almost every month and no doubt they will be partying again in three years’ time to celebrate the anniversary of Varangian Prince Rurik’s official founding of the city in 862. The Rurik dynasty was to rule for the next seven and a half centuries. In 1862, a huge bronze bell-shaped monument was forged to celebrate the “Millennium of Russia”. Three hundred tons of metal has been wrought into more than a hundred figures.

At this time of year, the night train from Moscow arrives in time for sunrise over the oldest Kremlin in Russia (kremlin - a Russian fortress); dawn has broken over the Cathedral of St Sophia for more than a millennium. Novgorod first became a free city, independent of ruling Kiev, in 1019, under Yaroslav the Wise, who built the cathedral and established Russia’s first school. Novgorod adopted Christianity at the end of the 10th century and soon became a powerful centre of orthodoxy. Built in 1045, beautiful St Sophia is the oldest surviving stone church in Russia. It resides inside the fortified Kremlin, or “Detinets” as it was known locally. The name Novgorod (“New City”) is strangely ironic in the context of so much superlative ancientness. The onion domes that give the cathedral its characteristically Russian look were actually added later, but the architecture of this building has become evocatively symbolic of the city’s ancient heritage.

The icon the Virgin of the Sign, to the right of the holy doors inside the cathedral, is supposed to have saved the city in 1170. The besieging army from Suzdal was plunged into darkness after an arrow hit the icon (a scar does exist above the Virgin’s eye). The battle itself is commemorated in another famous icon, the first to depict a historical scene: The Battle between the Novgorodians and the Suzdalians is in the Novgorod Museum, where you can admire icons from the 11th century onwards.

In the 12th century, Novgorod became a republic ruled by a “veche” assembly, which could vote the princes in or out. Historians debate how free this early democracy really was, but the republican traditions of trade, literacy and cultural exchange certainly produced a flowering of art and music. Jewellery, manuscripts, woodcarvings and epic songs are celebrated in the museum’s new anniversary exhibition. These diverse traditions have persisted in various ways. A new monument to the composer Rachmaninov, who was born in Novgorod, was opened near the Detinets during the anniversary celebrations. The programme included break-dancing, bell ringing and piano concerts at venues across the city.

Across the river from the Kremlin, Yaroslav’s Court contains several old churches, but very little from its earliest days of wooden palaces. A bronze sculpture of Rurik, arriving by boat, and a granite circle, with shields of the Hanseatic countries, have been opened this year next to the 17th-century trading arcade on the bank of the Volkhov.

Novgorod’s old marketplace has seen countless uprisings among the literate and independent peasantry. Full serfdom, as practised elsewhere in Russia, never took hold in Novgorod and, even today, there is a refreshing sense of independence about local government initiatives. Academic Nicolai Petro, whose book Crafting Democracy explores the potency of what he calls the “Novgorod myth”, argues that the area’s economic success, international links and political innovation have been fostered by “the local cultural tradition”.

The city’s infrastructure is certainly impressive. The streets are swept and signposted, the parks are green and peaceful and the English-speaking Krasnaya Izba tourist office is helpful and polite. Tourism is among the industries that have benefited from links with other countries and foreign investment. Petro argues that the city’s success has been due to “astute usage of local historical symbols…” He quotes the message inscribed on a wooden plate from Veliky Novgorod which, roughly translated, describes the city as the “source of Slavic liberty and Russian freedom”. The imposing offices of the regional administration, facing the Kremlin gates, have the slogan “Novgorod Veliky – Motherland of Russia” over the doors. After countless invasions and attacks, being razed by Ivan the Terrible, and systematically ravaged by the Nazis, Novgorod stands proud again. “Lord Novgorod the Great” was its medieval title. The city’s incredible collection of churches from eight centuries has been turned into a series of museums. Frescoes by the 14th-century Byzantine artist Theophanes the Greek have been uncovered in the the Church of the Transfiguration of Our Saviour, at the end of leafy Ilyina Street. The vibrant colours of the murals in the Cathedral of Our Lady of the Sign, next door, are less historically exciting, but equally beautiful. The St George Monastery to the south, among the marshes that made the city inaccessible to rampaging Tartars, is still a working monastery. Nearby, the Vitoslavitsy Museum of Wooden Architecture has restored buildings from across the region, ranged picturesquely on the shore of the Volkhov River. This museum was started in the Sixties, but the effect is to take the visitor back to Novgorod’s origins, a collection of wooden cabins and churches, surrounded by the wild swamps and woodland of the Russian countryside. In the distance, you can see the ruins at Gorodische, Rurik’s abandoned city, across the widening river and waving reeds.


Novgorod’s unique preservation plan
Although medieval Novgorod is hidden under an asphalt coating and the buildings of the present-day city, local geological and climatic conditions make an almost perfect environment for the preservation of artefacts. The deep cultural layer (up to 8-9 metres) in Novgorod holds entire neighbourhoods dated to the 10th-15th centuries, in the form of log buildings and wooden pavements. These archaeological monuments constitute the bulk of the historical and cultural heritage of Novgorod.

One of the foremost archaeological findings, the birch bark letters of Novgorod enabled historians for the first time to gain insight into the everyday life of the medieval city folk, their trade, land and interpersonal relations, as well as the Novgorod dialect of Old Russian: to date, 950 texts have been found.

The unique nature of the archaeological monuments of Novgorod make preservation of its cultural layer a matter of paramount concern. For this reason, in 1969, Novgorod became the first city to have the cultural layer of the city officially protected by the government.

In 1992, the historical centre of Novgorod received recognition as a Unesco World Heritage Site.

Places to stay
The clean and comfortable Beresta Palace is the best hotel in town and also the most expensive. Prices vary according to season, but a double room is rarely less than $150. There are several cheaper options, including the old
Intourist Hotel (around $80 for a double), complete with huge Soviet mural over the door and building site round the back. More centrally, the Arkon Hotel, between the railway station and the Kremlin, has good reviews and reasonable prices.

Food and drink
Plenty of new cafes and pizzerias are opening up. Restaurants are also blooming on the streets of Veliky Novgorod, some with live entertainment. The more unusual offerings include:
Restoran Detinets – inside the actual Kremlin walls surrounded by faux-medieval chandeliers and stained glass, you can sample well-cooked Russian staples and earthenware jugs of mead.
Yurevskoe Podvorye – if you visit the open-air Museum of Woooden Architecture, you might be glad of this spacious rustic-style restaurant. It’s a bit of a tour group magnet, but the rolls are fresh and the service is fast.
Holmgard restaurant is surely worth a visit.
Holmgart is the old name Varangians gave to Veliky Novgorod in the Middle Ages. Nowadays, the restaurant of this name combines traditions of Russian and Scandinavian cuisine. Here a piece of meat, fish or poultry of your choice will be grilled to perfection before your very eyes.

Souvenirs
The usual selection of matryoshki and lacquer work is on sale near the entrance to the Kremlin. Birch boxes are a local speciality. The Na Torgu craft centre near Yaroslav’s court prides itself on a high quality (and more expensive) selection of arts and artefacts.