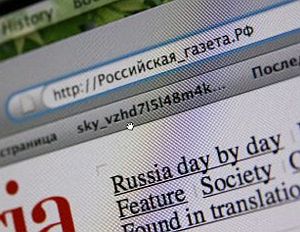 The first step in a long effort to make the internet less reliant on the Latin alphabet allows “nations and territories to apply for internet extensions… made up of characters from their national language”, the not-for-profit Internet Corporation for Assigned Names and Numbers (ICANN) said in a statement following a week-long summit in Seoul, South Korea.

“This is a historic move toward the internationalisation of the internet,” said ICANN CEO/president Rod Beckstrom. “We made the internet much more accessible to millions of people in regions such as Asia, the Middle East and Russia.” ICANN chairman Peter Dengate Thrush called it “the biggest technical change to the internet since it was created four decades ago”.

There are more than two million domains currently using the .ru domain, but President Dmitry Medvedev made acquiring Cyrillic web addresses an early priority of his administration. The .рф suffix will officially be delegated to Russia in February or March of next year, said Maria Mokina, spokeswoman for the Co-ordination Centre for Top Level Domain RU.

Industry experts played down the importance of the .рф for spreading internet usage or the Russian language. “Users are attracted to services, not domain names,” said Tatyana Komarova, spokeswoman for Yandex, the country’s search engine.

Andrei Vorobyov, spokesman for registrar RU-Centre, said .рф was likely to have a different audience, “targeted for the local community”, while .ru would appeal to a wider range of users.

Communications and press minister Igor Shchyogolev told an internet conference recently that “Russia would be the first country to use domains in a national language”. The localisation of names “will help remove the language barrier”, leading to “further increases in the number of internet users in Russia”, he said.

In May, Mr Shchyogolev estimated that Russia would see a 34pc increase in internet users this year, to almost 63 million people, from 47 million in 2008.