What signals did Medvedev send? 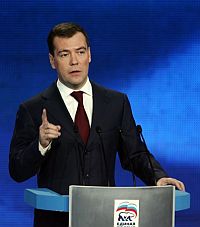 We asked some experts and politicians to share their impressions of the Russian president’s address to parliament. Dmitry Medvedev’s words inspired conflicting feelings in the people we consulted.

Medvedev signalled some turning points where his policy differs from Putin’s. Foreign policy should be built on pragmatic interests, and not on “nostalgic prejudices”. Medvedev reported an influx of capital and ideas. Putin said that we don’t need “comrades in pith helmets”, but Medvedev is willing to “buy them in”. Putin was carefully building a model of state monopoly, but Medvedev thought it pointless. Medvedev talks of financing non-state commercial organisations, which previously “used to beg for scraps at foreign embassies”. Medvedev called the Caucasus – a matter of pride for Putin – our main unresolved problem. (“There ought to be someone who is personally responsible for the state of affairs in this region.”)

All these signals were heard and understood by the deputies, the regional elites and other influential groups. But I don’t know who Medvedev will be able to rely on in all this. “Historical prejudices”, a particular approach and an unfriendly foreign policy are precisely what guides the Putin elite. Medvedev will meet with organised resistance. I think a certain turbulence is emerging in the upper echelons of power.


Alexander Rahr
expert at the German Society for Foreign Policy

This was a very interesting, blunt and at times dramatic speech, which was in some ways reminiscent of the statements of Peter I, who wanted to make medieval Russia into a modern secular state. There were some very sharp words. It included a very large proportion of self-criticism, which has previously hardly ever been heard from the lips of leaders of the Russian state. In my view, if the leader makes this analysis of the state of affairs in Russia, it means these affairs are looking very bad. At the same time the speech left a lot of room for various kinds of riddles. There is unintelligible political intrigue. In particular, it remained impossible to tell with whom the president of Russia wants to solve these problems, where his team is, and whether the Russian public feels that things in the country are as bad as their leader says.

If the president succeeds in shaking up the structure of Russia’s state-owned corporations, which was built by Putin, the economy will indeed begin to change. But for the time being all we can say is that the fate of this message will be decided in the next three months…

The important thing is that Medvedev mentioned the need to change the political system. But I was personally expecting much more from him...

It seems to me that Medvedev’s speech was considerably more dramatic than it might have seemed. He spoke for 100 minutes, and the main thing to which I would draw attention is that his whole speech was full of ideas about change. In the last two years the word “change” has been a slogan in all election campaigns the world over. When we compared the presidential campaigns in the USA and in Russia we saw that in the former, 70pc of the population wanted these changes, but here people didn’t, because in recent years the main idea in our lives has been the idea of continuity: we didn’t want changes. The uncertainty associated with changes frightens more than the price we have to pay for bureaucracy or for some kind of conservative policy.

And if the president is not to find himself alone in his desire to steer the country towards changes and to avoid a split between the old bureaucratic hierarchies and the hierarchies of modernisation, he will need the intellectual support of the elites, including their support for building a bridge of understanding between the president and society, which in recent years has demonstrated a very high level of conservatism.

In past messages there were more specific decisions, which implied specific financing. The resources for implementing decisions and proposals in previous messages were money and bureaucracy. But that’s not how it is in this message. In this message there is less talk about how the money will be found: there is simply less of it, because the crisis means the state budget is smaller and tighter. But it is therefore possible to talk about bringing in a different resource. And what different resource is that? The social resource. Not only money and bureaucracy, but primarily society, all that is most wise, free and just.