Recruiting the elite for the future

Lifestyle
RBTH
Based on materials from Expert magazine 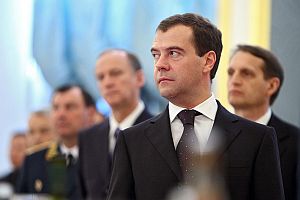 Was President Dmitry Medvedev’s annual address to parliament yet another sign of the widening gap between rhetoric and reality? Many commentators believe Medvedev has not done much to earn the reputation of a liberal politician committed to decisive reform.

Dmitry Medvedev’s state of the nation address clearly outlined his agenda, including structural economic reform by way of comprehensive technological and social modernisation, gradual expansion of political competition and a pragmatic foreign policy.

This agenda will determine Russia’s policy for the next few years, up until the 2012 presidential elections.

However, experts are confused by the disparity between Mr Medvedev’s plans and his cautious approach. Some see this as weakness and lack of independence, while others say he is abusing his position to enhance his political image. Neither explanation reveals the president’s true strategy.

Of course, many prefer to think in policy terms. This opinion is typical of those calling for speedy democratisation, including radicals willing to liberalise everything and those yearning for “enforced” democracy.

Mr Medvedev’s logic is broader: tough measures won’t make him popular. He simply does not have the backing Putin has. On the other hand, Mr Medvedev can create a new public atmosphere to promote his agenda. A new Civil Society Institution and Human Rights Council have been formed, and Nikita Belykh, a former opposition leader, was appointed governor of the Kirov region.

In addition, a couple of judges suspected of corruption were forced to resign, giving hope for positive changes in Russia’s judicial system. Similarly, a new Ingush president has been appointed, whose policy of appeasement and confidence won public approval. Both Medvedev’s article “Forward, Russia!” and his annual address fell on good soil: the initiator of reform is not just the President himself, but all society. It’s no coincidence that Medvedev so actively refers to reader feedback on his article.

Russia needs a consolidated elite. The process seems to be approaching a vital point. On the one hand, the elite have accepted Medvedev’s agenda, with top officials starting to take innovation much more seriously. On the other hand, it is thanks to emerging consensus among the elite that the Kremlin can finally loosen its grip a little. In this situation, an economic breakthrough and technological upgrade are necessary, in addition to socio-political modernisation and working democracy.

This is what comprehensive modernisation means under current circumstances. Clearly, someone will have to pay for the breakthrough – with a restricted appetite and strenuous work.

But there is no need to follow the example of the mobilisation efforts of primary industrialisation, made under specific historical conditions and with excessive human resources. Our society is different today, and we need different modernisation mechanisms. Real economic and technical modernisation and the creation of a free society are vital in order to preserve Russia. If this urgent task remains unresolved, if we don’t get more sensible policies and a more sensible economy, the country will simply collapse under the burden of its problems.


In the president’s words…
In the 21st century, our country once again needs to undergo comprehensive modernisation. This will be our first ever experience of modernisation based on democratic values and institutions. Instead of a primitive raw materials economy we will create a smart economy producing unique knowledge, new goods and technology of use to people.

Our relations with other countries should also be focused on the task of modernising Russia. We must not simply be full of hot air, as they say. We are interested in capital inflows, new technologies and innovative ideas. We know our partners are counting on a rapprochement with Russia to realise their own priorities. Therefore, our foreign policy must be extremely pragmatic.

We have been providing direct support during the crisis, direct subsidies to Russian companies, and this money comes to more than 1 trillion roubles now. In the future, we will provide such support only to businesses that have clear plans for raising effectiveness.

Regarding state corporations, I think that this legal form of enterprise has no future overall in the modern world. The corporations with a lifetime set by law should wind up once their purposes are accomplished, and those operating in a competitive business environment, should be eventually transformed into joint stock companies under government control

Many aspects of political life have been subject to public criticism… As the guarantor of the Constitution, I will continue to do everything possible to strengthen democratic institutions in our country. At the same time I would like to emphasise: the consolidation of democracy does not mean weakening the rule of law.