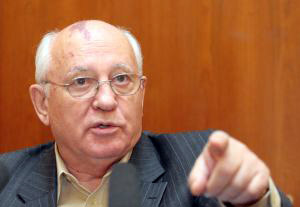 The road to the end of the Cold War was not easy, nor universally welcomed at the time, but it is for these reason that its lessons remain relevant. In the Eighties, the world was at a historic crossroads: the East-West arms race had created an explosive situation; nuclear deterrents could have failed at any moment; we were heading for disaster, while stifling creativity and development.

Today, another global threat has emerged. The climate crisis is the new wall that divides us from our future; current leaders are vastly underestimating the urgency and potentially catastrophic scale of the emergency. People used to joke that we will struggle for peace until there is nothing left on the planet: the threat of climate change makes this prophesy more literal than ever.

Comparisons with the period immediately before the Wall came down are striking. Like 20 years ago, we face a threat to our very existence that no one nation can deal with alone. And, again, it is the people who are calling for change. Just as the German people declared their will for unity, the world’s citizens today are demanding that action be taken to tackle climate change and redress the deep injustices that surround it.

Twenty years ago, key world leaders demonstrated resolve, faced up to opposition and immense pressure, and the Wall came down. It remains to be seen whether today’s leaders will do the same.

Addressing climate change demands a paradigm shift on a scale akin to that required to end the Cold War. But we need a “circuit-breaker” to escape from the business-as-usual approach that currently dominates the political agenda. It was the transformation brought about by perestroika and glasnost that set the stage for the quantum leap to freedom for the Soviet Union and Eastern Europe. Climate change is complex and closely entwined with a host of other challenges, but a similar breakthrough in our values and priorities is needed.

In 1989, incredible changes – deemed impossible just a few years earlier – were implemented. This was no accident: the changes resonated with the hopes of the time, and leaders responded. We brought down the Berlin Wall in the belief that future generations would solve challenges together. Today, looking at the cavernous gulf between rich and poor, the irresponsibility that caused the global financial crisis, and the weak and divided responses to climate change, I feel bitter. The opportunity to build a safer, fairer and more united world has been largely squandered.

To echo the demand made of me by my late friend and sparring partner President Ronald Reagan: Mr Obama, Mr Hu, Mr Singh, and, back in Berlin, Ms Merkel and your European counterparts, “Tear down this wall!” For this is your wall, your defining moment. You cannot dodge the call of history.

I appeal to heads of state and government to come in person to the climate change conference in Copenhagen this December and dismantle the wall. The people of the world expect you to deliver. Do not fail them.

Mikhail Gorbachev is the founding president of Green Cross International.