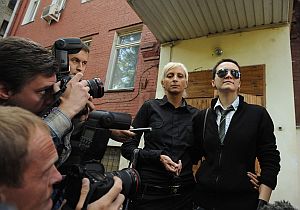 The happy couple: Irina Fedotova-Fet and IrinaShipitko wanted their relationship to be officiallysanctioned, but were refused a ceremony in theMoscow registry office

When it comes to gay life in Moscow, there are duelling cities. There is the city most Europeans have heard of, the one with the homophobic mayor who preaches intolerance and forbids gay parades, the Moscow where gay men and lesbians are beaten and clubs are closed.

But there is the other city, where gay families are openly raising children and couples are out and increasingly public about their private lives.

Masha Gessen is an author and deputy chief editor of Snob magazine, a Russian version of Vanity Fair. She is also a gay woman who is married, and a mother. She does not describe her life in Moscow as one under siege.

Gessen and her partner pick up their children from school, and attend parent-teacher meetings together.

“We were married in Massachusetts, but our marriage is not officially registered here,” said Gessen. “There might be legal complications, for property or parental rights, if problems occur, since our marriage cannot be recognised by Russian law. Otherwise, when it comes to everyday life, we have not had much trouble so far.”

Gessen said her employer is gay-friendly and open to gay writers and editors.

This is, of course, not Russia, just a sliver of life in the capital city. But a growing activist movement and the quiet life of gay couples and families is beginning to have an impact, ever so small, on a society known for its hostility toward gays and lesbians.

To be sure, the threat of violence remains a concern, and a brake on sexual politics.

But Gay Russia, a human rights and political movement for sexual minorities founded four years ago, is none the less making inroads. It boasts high-profile activists and supporters in almost every large metropolitan area in Russia, and the gay community is facing down intolerance.

Human rights violations, instances of political discrimination, and homophobic statements by Russian officials are recorded on the gayrussia.ru website, in Russian and English. There have been some political victories.

Although not a single Russian city administration has allowed gay activists to hold a pride parade, this year there were indications that official hostility to gay activism is softening.

Last spring, an effort to ban gay literature in Ryazan, a region southeast of Moscow, was defeated after gay activists protested.

“Although all 160 applications we filed in four years asking the authorities for the right to demonstrate were denied, our efforts still brought results,” said activist Nikolai Bayev.

“Russians now know that gays and lesbians are Russian citizens, struggling for their rights, as any other minority. Our voices are heard sometimes by the mass media and even some policy makers."

Away from the political arena, gay Russians are creating their own islands of tolerance.

“No matter what bureaucrats think of sexual minorities, we will date and love each other, as any other humans,” said Natasha, a 25-year-old student.

Natasha and her girlfriend Alena, lounging in a lesbian pick-up spot on Tverskoi Boulevard, a 10-minute walk from Red Square, said the risk of violence is real, but diminishing, at least in Moscow. Last spring, a lesbian couple became the first to attempt to legally marry in Russia.

Two activists, Irina Fedotova-Fet, 30 and Irina Shipitko, 32, put on black and white tuxedos and bow ties and showed up at Moscow marriage registry office with roses in their hands. Their application was rejected, as expected. "Irina and I always knew we would spend our life together," said Fedotova. "We decided to make our marriage a public act, to create a precedent in Russia for other gay couples to follow.”