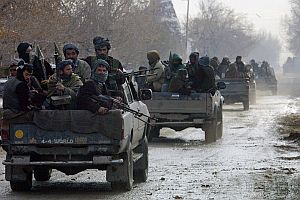 In the latest part of our special series, war correspondent Vladimir Snegiryov discusses popular military misconceptions about the skill of Afghan soldiers and their ability to be self-reliant on the fields of battle. His final piece will be in the next issue.
In February 1989, Kabul was flooded with journalists from around the world. The only decent hotel in the Afghan capital was overflowing with reporters from top television channels, news agencies, newspapers and magazines. The last units of the Soviet contingent had just left Afghanistan and my colleagues believed nothing could stop the Mujahideen from picking the desired fruit. All they had to do was reach out and take it. The media were looking forward to wiring sensational reports back to their headquarters.

To be fair, similar logic prevailed among many senior Soviet officials, including those in the defence and foreign ministries and the intelligence service. Several transport aircraft were on standby to take off from Moscow and Tashkent in Uzbekistan to evacuate Soviet citizens remaining in Afghanistan. Most people were sure that, once Soviet troops withdrew, Najibullah’s regime would hold out for two or three weeks at most.

The first guerrilla attack hit the town of Jelalabad in eastern Afghanistan. Close to the Pakistan border it was rightly considered to be the key to the Afghan capital. It took mere days for the Mujahideen to close in on Jelalabad, block all the roads leading into the city, and pound government troops and residential blocks with thousands of rockets, mortar shells and missiles. I am not recounting events from a history book, but telling you what I saw with my own eyes. I managed to get inside the embattled Jelalabad in an Afghan helicopter and spent more than two days there. Or, more precisely, 49 hours.

Why am I so specific? Because each of the 49 hours I spent in Jelalabad was fraught with peril. I can still hear the chilling sound of approaching missiles and see the hair-raising devastation inflicted by the Mujahideen on one of the most beautiful cities in Afghanistan.

Still, I was much more impressed by the determination of government troops to defend their city at any cost. President Najibullah and his generals set up a well-thought-out defence system, reinforced the besieged troops by sending reserves, and provided a steady supply of food and ammunition by helicopter. I saw how all the Mujahideen attacks were fiercely fought off by the Afghan army, police and special forces of the National Security Ministry. I was amazed by the courage of both rank-and-file soldiers and senior generals, who shared wartime hardships with their subordinates and stayed at the front line in some of the most dangerous places.

It was all the more surprising because, during the years of Soviet presence in Afghanistan, we had come to view the Afghan army as deplorably inefficient. In most operations, the Afghans had been allowed to stand in cordon lines at best. The general opinion was that they lacked morale, were poorly trained and tended to desert or betray their allies.

Why did these seemingly hapless soldiers fight so bravely in Jelalabad?

First, they had nobody to hide behind and had to fight alone; second, tens of thousands of Afghan officers had been trained at Soviet military academies and courses for senior commanding officers during years of Soviet-Afghan co-operation. Those officers formed the backbone of the Afghan army. Almost all operatives in the Afghan Secret Service, all the mid-level and senior officers at the Ministry of Defence, and most police officers attended specialised establishments offering high-quality education. And, most importantly, apart from gaining knowledge, they saw a new way of life which was quite different from what Islamist fanatics tried to impose on them. With that experience, they had something to shed their blood for.

Much later, the memoirs of intelligence officers and politicians revealed what huge resources were mobilised in the spring of 1989 to capture Jelalabad and topple Najibullah. The army, which was assaulting the city for several months, was almost openly led by Pakistani intelligence officers, and ammunition-laden trucks were pouring from the border town of Peshawar 24 hours a day. Did all that help? Not a bit. The Afghan army finally pushed the Mujahideen back from Jelalabad and were equally successful fighting them off across Afghan territory for more than three years until the Soviet Union fell apart and ammunition supplies ran dry.

This story contains a lesson, particularly for those who are trying to reverse the situation in Afghanistan. Do not forget that you are dealing with a mystical country and a standard approach does not work here.

As for the journalists, who flocked to Kabul from all parts of the planet to report a sensation, their journeys alas proved to be a waste of money. There was no big story.