Europe and Russia after Lisbon 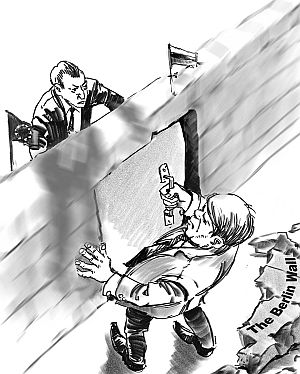 The current legal basis for relations is the 1994 Partnership and Co-operation Agreement (ratified in 1997). With the exception of a small political preamble, it is a standard non-preferential agreement, which signifies the lowest possible levels of co-operation. The agreement expired two years ago, but it is being extended for the time being. Talks on a new one began this year, because of a lengthy hold-up associated with the Polish veto on the relevant European Commission mandate. There have already been six rounds of talks, but both sides recognise that they are only at the start of the journey. One would like to hope the creation of a post-Lisbon Europe will accelerate the talks process, but so far there are few grounds for such optimism.

In some ways it was easier in 1994. Russia was weak, less sure of itself, still nourishing residual illusions about possible membership of the EU, and was willing to meet its European partners halfway. The EU was more politically and ideologically homogeneous, not as numerous or varied as it is now, and it did not include the range of “new Europe” countries that immediately take a combative stance whenever they hear the word “Russia”. Today, Russia is not prepared to sacrifice anything for the sake of a new agreement, but in the EU there is no less desire to put pressure on us regarding one issue or another; in fact, the numbers wishing to do so have increased.

The document being drawn up does not yet have a name; the term “new basic agreement” is being used as a working title. We are proceeding from the fact that it should be a legally binding framework agreement, short and all-embracing, which leaves the details to other agreements. The Europeans would prefer to have more detail in the treaty itself. The teams of negotiators have made quite good progress in a number of areas: industrial policy, space, tourism, statistics, financial accounting and auditing… But on other tracks there is still no end of work to be done. There are especially large numbers of conflicting claims in the area of trade. Moreover, our EU partners are putting forward a number of preconditions to the conclusion or ratification of a future agreement. These include our ratification of the European Energy Charter, which represents an unfulfillable obligation to pump any quantities of other nations’ oil and gas across our own territory; or our joining the World Trade Organisation, and rapidly too, without taking into account our obligations under the Customs Union with Belarus and Kazakhstan.

The talks promise to be lengthy. For the time being, it is difficult to imagine an agreement coming into force when it requires that it be not only concluded but also ratified in the parliaments of all the EU member states, including those which are not at all inclined towards partnership with Russia.

The talks are focusing more on economic niceties, and it is still not quite clear how the future document will reflect issues of concern to civil society and ordinary people. What would they like to see in a new agreement?

Above all, it has to be an agreement between equal partners, representing independent centres of power in the modern world, neither of which is setting out to teach the other how to live.

The aim should be not simply to create preferential relations but also to form a single economic, political, cultural and humanitarian space.

If one were to ask Russians what they want from the European Union, they would think hard about it and then reply that they would welcome a visa exchange. After the fall of the Iron Curtain and the Berlin Wall, we also need to bring about the fall of the “Schengen Wall”, which restricts movement into the EU from the East.

I suppose it would be correct to identify democracy as the most important principle in terms of organising the state and society, recognising at the same time that strongly developed forms of democracy are a matter for the future, and for everyone.

It is important to consolidate the principle of the rule of law, including international law, which has been repeatedly flouted in recent decades, when it has been necessary to use military force against hostile regimes.

It is essential that equality of all citizens is observed, including with respect to national identity, but this is obviously being flouted in two EU countries, where many Russians and Russian-speaking people do not have elementary civil rights.

It needs to be fully understood that adherence to democratic values excludes rehabilitating fascism and fascists, making veterans of SS divisions into heroes and destroying monuments to heroic liberating forces. This is especially important on the threshold of the 65th anniversary of the Great Victory.

It is essential to enshrine in the agreement the right of all people to use their native language, and to give mutual encouragement to the opening of schools where national minorities can receive education in their own language.

This is also important for us because the Russian world is the biggest national minority in the European Union. The Russian world is not just Russian people. At Russian congresses in Germany, for example, many Germans are from Kazakhstan and many Jews are from Ukraine. But there are about 10m people who speak Russian in EU countries, which is more than the population of the average European country, and all the rights concerning national minorities, including in the area of education, should be extended to them.

The road to a new agreement is not simple, but we have to travel it, without getting stuck in the ruins of the Berlin Wall, the 20th anniversary of whose fall we recently marked together.