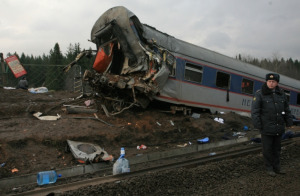 Russia witnessed no fewer than three tragic events during the last week of November.

On the evening of Nov. 27, a bomb exploded under the Nevsky Express traveling from Moscow to St. Petersburg. This bombing caused more bloodshed than any crime in Central Russia since the August 2004 bombing of two passenger planes. On the morning of Nov. 29, a train from Tyumen to Baku was bombed in Dagestan. And almost simultaneously, Arbek Gadzhiev, head of the Magaramkentsk region of Dagestan, was killed in the Dagestani capital Makhachkala

Although the tragic days of November 2009 have not revealed anything fundamentally new, they have confirmed, if not reinforced, certain important political tendencies. Unfortunately, Russian authorities have not been able to correctly identify the phenomenon of terrorism. For more than a year now, the Russian government has incorrectly defined the threat hanging over Russia, calling it “gangsterism.” This designation indicates that the state does not understand the socio-political nature of the terrorist threat and equates the government response with crime fighting. This misinterpretation has resulted in an underestimation of the enemy’s forces, resources and motivations as well as the insistence that the “anti-terrorist operation” be wrapped up in two months. It has also produced persistent efforts to change the system of reviewing terrorist cases either by abolishing juries or by handing over all cases of this sort directly to the Russian Supreme Court – a move that conflicts with the constitution. In the wake of the November incidents, many Kremlin-connected experts have demanded a reinstatement of the death penalty; this can hardly be a coincidence.

In principle, the cause of this misunderstanding of terrorism and terrorists is clear. Russia’s top leaders, first of all, have tried and are still trying to simplify the identification of terrorists for populist reasons and have avoided the many complexities of the situation. Secondly, this definition of those terrorists as gangsters dates back to the first Chechen war (1994-1997), when certain overenthusiastic European journalists and political scientists called Aslan Maskhadov and Dzhokhar Dudaev “fighters for freedom and national independence.” In the language of bureaucrats, this became “gangster” rather than “terrorist.”

The decision to equate terrorism with commonplace crime seems dictated at first by a noble aim — to minimalize the motivations of the organizers and perpetrators of terrorist acts and deprive their actions of moral justification. However, such an approach ignores a fundamental principle: Acts of extremism directed against a nation’s unity and integrity, against human rights and civil rights, are not tolerable. To bring down a group of terrorists, the fight must be not only against their various criminal methods, but also against their political and ideological aims.

The Russian government is now facing, as it was five years ago, not common criminals, but proponents of a particular ideological and political project. The Beslan tragedy in 2004 was the last large-scale terrorist act of Chechen separatists in favor of seceding from Russia and creating an independent state. Since then, separatists in the North Caucuses have instead used the slogans of radical Islam. This has fundamentally changed the nature of the threat, broadening it from Chechnya to all of the North Caucasus. Doku Umarov, who claimed responsibility for the Nevsky Express bombing, has said that he wants the “liquidation of the Chechen republic of Ichkeria” and to turn it into part of a Caucasian “emirate.” He also wants to outlaw “the names with which infidels divide Muslims into ethnic, territorially colonial zones known as republics of the North Caucusus.” The Islamicization of the North Caucasus means that we cannot neutralize the terrorist threat by sending in three or four more regiments.

In this new context, Russia needs to develop an anti-terrorist strategy commensurate with its overall objectives. Following the two Chechen wars, some Russian officials and terrorism experts embraced Israeli methods of fighting terrorism. The technical execution of Israeli operations are undoubtedly impressive and they have destroyed particular terrorist groups, but Russia needs an anti-terror strategy that takes into consideration political and ideological elements. While recognizing the high professionalism of the Israelis, it must be said that Israel has not made integration of the local population in occupied territories its mission. Israel has concerned itself with guarantees of security for the Jewish state and basic survival in a hostile surround. There has been no talk of assimilation and acculturation in the occupied territories. It would be hard to imagine such a thing given the nature of the state of Israel.

But Moscow’s mission is to combine the North Caucasus republics and their citizens with the rest of Russia into a single nation. This is why an anti-terrorist philosophy in Russia cannot be built on Middle Eastern experience. Rather it should consider the Spanish, French or British experience, in which the toughness of the government’s position was combined with “soft power,” a division of opponents into “moderates” and “radicals,” and the use of negotiations combined with surgical strikes against the ringleaders of terrorist groups. In fighting the terrorist threat today, Russia does not need pseudo-patriotic rhetoric. Instead, it needs a clear understanding of the dynamic, to understand the underlying causes of terrorism both as a strategy and tactic of political violence. And it needs to distinguish a terrorist act from a gangland slaying.

Sergei Markedonov is a political scientist and independent expert on the Caucasus.