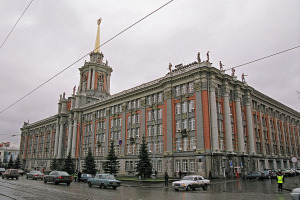 With an increase in foreign tourists who dream of seeing the “real” Russia beyond Moscow and St. Petersburg, many provincial Russian towns are actively vying for the title of Russia's “third city.” One of these is Yekaterinburg, the administrative center of the Sverdlovsk Region and a metropolitan center with more than 1.3 million people.
Founded in 1723 and named for Yekaterina, the wife of Peter the Great, the city grew up around the metalworking industry. During the Soviet era, the city became a large industrial center with gigantic factories, scientific institutes and modern universities, but because of the concentration of military facilities, the city was closed to foreigners. Today the city is not only an industrial powerhouse, but a trade and cultural center with a diverse population.

Yekaterinburg is the dividing line between two continents and two periods of history. The Ural Mountains, which run through the region, mark the border between Europe and Asia. The environs of Yekaterinburg are full of obelisks and other commemorative signs indicating the precise location of the divide. Throughout the region, visitors can take pictures with one foot in Europe and the other in Asia.

Yekaterinburg was also the final home of Russia’s last tsar. Nicholas II, his wife Alexandra and their five children lived in the city for 78 days before being killed by the Bolsheviks on July 18, 1918. Their deaths marked the end of Imperial Russia and the beginning of the Soviet Union. Today, the Church of All Saints stands on the site of the house where they were killed. Construction on this contemporary building began in 2000, the same year the Russian Orthodox Church canonized the Romanovs. This action generated fresh interest in the royal family, and now every July Yekaterinburg hosts “Tsarist Days,” a festival of Russian culture that attracts pilgrims from all over the country and representatives of the tsar’s family.

Despite the city’s Soviet-era notoriety, monuments of that time have not disappeared from contemporary Yekaterinburg. In the 1930s, Sverdlovsk was one of the Soviet Union’s laboratories of experimental construction and the city boasts a number of buildings in constructivist style. Uralmash, the manufacturer of industrial equipment, built the first of the city’s Soviet-era districts, which features a host of architecturally interesting public buildings.

There is also at least one interesting site from the post-Soviet era – the cemetery on Shirokaya Rechka, also known as “the Mafia Cemetery.” One of the city’s oldest cemeteries, it features the massive tombstones of mafiosi killed during the turbulent 1990s – outsize symbols of the brief but wild post-perestroika era.

But Yekaterinburg is not a place where time stands still. The city today is known for its culture, including an orchestra that plays in one of the best philharmonic halls in Russia. Every December, the city hosts Kinoproba, Russia’s largest documentary film festival. Additionally, the city boasts a world-class theater of opera and ballet. This theater raised a whole generation of celebrated singers, including the world-famous performers Ivan Kozlovsky, Sergei Lemeshev, Irina Arkhipova and Boris Shtokolov. The ballet repertoire includes more than 40 productions.

Sculpture decorates the city’s streets. On Vainer Street, in the heart of the city, you will find several sculptural compositions: The inventor of the bicycle, the Urals master Artamonov together with his invention; a driver at the wheel of a vintage automobile; a pair of lovers; and a street trader. And next to the Belinsky Library you’ll see a statue of… the invisible man. Meanwhile, on the embankment, between Malyshev and Kuibyshev streets, there is a sculpture of a computer keyboard. And not long ago the Beatles fans of Yekaterinburg paid out of their own pockets to erect a sculpture of the Fab Four.

Although Yekaterinburg was closed to foreigners during the Soviet era, today it is the home of international students, expatriate engineers, hoteliers and chefs as well as diplomats working at the city’s many consulates. A resource for these expats and Yekaterinburg’s growing number of foreign tourists is Ekaterinburg.com, a Web site edited by Mikhail Ponomarenko.

There are regular flights to Yekaterinburg’s Koltsovo International Airport from most major international cities, including Frankfurt, Munich, Dusseldorf, Prague, Vienna, Dubai, Istanbul and Beijing. Daily flights are also available from each of Moscow’s three airports. A commuter train connects the airport to the city railway station. Two minibuses (№ 26 or № 39) also take passengers into the city.

Yekaterinburg is also a major stop on the Trans-Siberian Railway and there are daily trains from Moscow and other major Russian cities.

Yekaterinburg has a number of hotels in various categories, from two to five stars. Other options are camping sites and youth hostels. It is also possible to rent an apartment for a short-term stay. The average cost of a single room in a three-star hotel is between 3,000 and 4,000 rubles.

All photos by Tatiana Andreeva