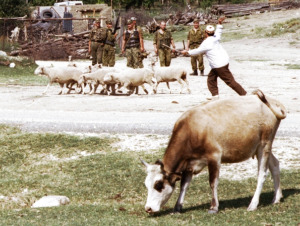 The term of Dagestani President Mukhu Aliyev expires in February 2010, which means that by that time, and most likely before New Year, the Kremlin will have to decide whether to keep him as the head of the republic for another four years.

Dagestan was the last of Russia’s 83 regions to have a presidential post created. Previously, the republic was ruled by a State Council comprised of representatives from the region’s 14 main ethnic communities. These representatives were elected by the Republic’s Constitutional Assembly and alternate on a rotation basis. In reality, however, the chairmanship of the State Council never rotated. Magomedali Magomedov, an ethnic Dargin known in the republic as “grandfather,” initiated amendments to the republic’s Constitution that paved the way for him to extend his term as chairman of the State Council until February 2006, after which time the State Council was abolished and Aliyev, an ethnic Avar, became the republic’s first president. A veteran of Dagestan politics, Aliyev served as first secretary of the Dagestan regional committee of the Communist Party of the Soviet Union from 1990 to 1991 and chairman of the republic’s parliament from 1995 to 2006.

According to the current federal procedures for organizing a regional administration, the ruling party composes a list for the Russian president listing possible candidates for the presidency of the republic. In November, the ruling United Russia party presented President Dmitry Medvedev with a list of five candidates for president of Dagestan, all of whom are influential figures in the republic. Many of them have their own interests reaching far beyond Dagestan and have their ways of getting a position in the presidential administration or the federal government.

In addition to Aliyev, the list includes Magomed Abdullayev, deputy prime minister of the Dagestani government and, like Medvedev, a lawyer and graduate of Leningrad State University. Another candidate, Magomed Magomedov is currently serves as assistant to the speaker of the Council of the Federation. He also happens to be an important businessman well-connected to the Moscow elite. Magomedsalam Magomedov, whose father was permanent chairman of the Dagestan State Council from 1994 to 2006, has solid connections with Suleiman Kerimov, a well-known entrepreneur and millionaire living in Moscow. Saigidgussein Magomedov is a candidate for the presidential post for the second time. He is not very well known as a political figure, but he is considered to be an effective lobbyist for his own interests in Moscow.

As opposed to the situation in neighboring Chechnya, appointing a president in Dagestan will not be as easy or predictable. First, unlike Chechnya, Dagestan is polyethnic – a situation evident in its extremely diverse elite class. In Dagestan there are various bureaucratic clans with their own interests, based both on ethnic and administrative backgrounds. These divisions complicate the already complex situation created by a split in Muslims in Dagestan. Most Dagestanis are Sufi Muslims, but members of this majority are at odds with advocates of Salafi Islam. Moreover, the Dagestan elite and influential Dagestanis in Moscow do not exactly see eye to eye.

As a result, the president of Dagestan cannot be an autocrat like Chechen President Ramzan Kadyrov. He must be a moderator and mediator, capable of weighing and analyzing numerous nuances. After four years in power, Aliyev was unable to solve the numerous problems that faced him in 2006, but it is hard to say if anyone would have done better in his place, especially given the inadequate attention the republic received from the Kremlin. Certainly Moscow pumps large amounts of money into Dagestan, but it has virtually no impact on the domestic political behavior or interclan and intergroup disputes in the republic. Instead, Moscow prefers to dodge any existing, critical issues by dumping the responsibility for them entirely on the regional president. Nevertheless, opponents of Aliyev are using the increasingly diversified terrorist activity and the difficult social-economic situation as arguments against him. Official data puts unemployment at more than 13 percent although expert estimates have it as high as 20 percent. Additionally, the black market makes up almost a third of the republic’s economy.

But the strategic importance of Dagestan is hard to overestimate. The largest republic in the North Caucasus, it covers 50,300 square km (19,420 sq miles) and is home to 2.5 million people. The capital of the republic, Makhachkala is a major sea port on the Caspian Sea, with access to Azerbaijan, Iran, Kazakhstan and Turkmenistan. It is the only Russian port in the Caspian that does not freeze over. Dagestan is also the Northern Caucasus’s leading republic in terms of hydro energy resources.

Although it is fair to question how well Aliyev has handled the current problems, it should also be asked if any of the other candidates have any legitimate plans for change up their sleeves. Aliyev probably could be given credit for preserving the fragile balance of power between the various different ethnic elites, but his critics could blame him for a lack of transparency, as well as his decision to make insufficient changes to the republic’s power structure in order to preserving the clan system. Terrorist activity, which is rooted more in the republic’s inefficient authorities than in any external action, also casts a shadow over the republic’s administration.

No matter who becomes president of Dagestan, he will face difficult, systematic problems. No matter how complex the relations between different groups and the elite in Dagestan, one thing is simple. The North Caucasus’s largest republic will not be able to overcome its existing problems without a clear plan from the federal center. First among Dagestan’s internal problems is the fight against terrorism and Islamic radicalism. It’s clear that no single regional administration, even the best one, can handle this without minimizing corruption or without providing a sustained informative and educational policy aimed at forming a united Russian identity. No matter which Kremlin-endorsed candidate becomes the next leader of Dagestan, the federal authorities will finally need to take a more active part in the Republic, especially since many are expecting this and see Moscow as an unbiased arbitrator and guarantor. Like the expression by poet Rasul Gamzatov, which has become the republic’s semi-official slogan, says: “Dagestan never was voluntarily part of Russia, and will never voluntarily break away from it.”

Sergei Markedonov is a political scientist and independent expert specializing in the Caucasus.