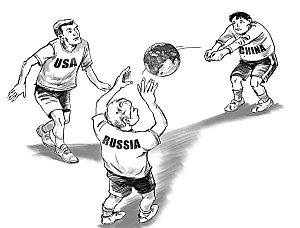 While both President Hu Jintao and President Obama agreed to work together on pressing international issues, Obama has now joined many world leaders calling on China to allow its currency, the renminbi, to appreciate. Obama contends that the currency is undervalued and damages U.S. exports. The Russian Federation, however, has been quiet on this matter.

The People’s Republic of China has become a major economic player in the world community. As China continues to grow, Russia views the situation as more of an opportunity rather than a threat. China has been successful in actively promoting joint venture partnerships with profitable Western companies. Currently, Russia lacks the ability to effectively integrate these new technologies into the fabric of its economy.

The Russian government recognizes that the key to developing a robust and stable economy is to push strengthening relations with China. Russia is eager to understand how China has been able to rapidly absorb and utilize Western know-how and entrepreneurial business success; it seeks to emulate China’s relatively open economy. Privatized Chinese companies can now work together with Western companies to develop, refine and control capitalism. By contrast, Russia’s economy has been characterized as unstable, unmanageable and unworkable. This is due to the interrelation of organized crime with Russian political leaders and nationalization of successful foreign businesses.

Many members of the Russian politburo have strong ties with oil and natural gas companies seeking to increase and expand their presence in Asia. Many people associated with these firms are former high-ranking Russian military officers, including ex-KGB, who were among the most professionally trained in the former U.S.S.R. These people seek out profitable joint venture business opportunities, thereby hoping to prevent the United States from dominating global affairs. According to recent studies, many Russians (47 percent) have responded favorably to increasing trade contacts and ties with China. Russians view the rise of China as the result of a more multipolar world. They believe that the United States must learn to coexist with other rising powers, including China and Russia.

While the Russian government wants to protect and defend Russia’s sovereignty, they recognize that the Federation may be better protected through closer economic ties with China rather than the West. Many Russians believe that the Chinese respect a country’s internal affairs and don’t seek to enforce the ideals of a “good society” on other sovereign nations. Moreover, President Hu Jintao echoed the Russian sentiment toward U.S. policy when, during his recent meeting with President Obama in Beijing, Hu mentioned, “We will continue to act in a spirit of equality, mutual respect and noninterference in each other’s internal affairs.”

It has been suggested that Russia views a close economic, political and strategic relationship with China as a viable, ongoing relationship that could mature into a political, economic or military union similar to the North Atlantic Treaty Organization or the now-defunct Warsaw Pact. In this new union, China, Iran, Russia, Venezuela and many other non-Western nations would emerge as a powerful bloc in opposition to the imposition by the West of Western-style capitalism and democracy. This system is still viewed as chaotic, unstable and uncontrollable by the Russian government and its people, who still vividly remember the collapse of Russia and its tumultuous transition to a democratic system.

The prospect of China providing a security buffer against Russia has been the rationale for mistrust and suspicion between China and Russia. However, the leadership in Russia wants to strengthen Russia’s ability to choose its own partners in an increasingly globalized society. For the past twenty years, Russia has always sought recognition from the West as a leading superpower. However, strong criticism of Russia by presidents George W. Bush and Bill Clinton created a perception that the United States is an arrogant hegemonist. Unlike China, the prevailing view among the Russian government is that the United States is seeking domination, manipulation and isolation of Russia.

The closer relationship being established between China and Russia should encourage the United States to alter its mindset toward Russia. The United States must support the emergence of a rapidly growing Russian middle class. Encouraging Russia to participate as a responsible stakeholder in the global community will help Russia choose and manage its economic and political relationships wisely.