The gift of irony 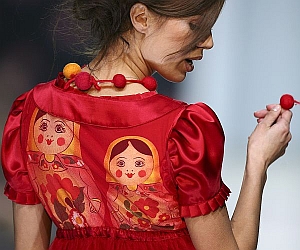 What to buy for that special someone? If they know anyone who has been to Russia, chances are they already have all the nesting dolls they need. Phoebe Taplin helps update Americans on Russian gift-giving.
The first time a tourist hits the Russian souvenir shops and Christmas fairs, the sight is astonishing. Perhaps on later visits, however, the same tourist comes to the realization that Russian tchotchkes can be extremely uniform in craft and spirit, leaving one in the same old what-to-buy predicament.

Don’t despair! The gift-giving scene has diversified and there is a much broader, more creative selection of Russian presents, from high-end whimsy to kitsch souvenirs, than even a few years ago. How would you like to have your family portrait carved out in chocolate? [Details on Page 3] For those on a post-crisis budget, local designers are also exploring satiric trends, and playing with Russian traditions on fabric. Their accessories make interesting gifts and some are not as expensive as their European peers.

Standard-bearers like birch wood boxes, fur hats, painted trays, shawls and snow globes are still fixtures of the Internet and the souvenir stalls outside Red Square. But traditional gifts are also adapting to suit modern customers.

These days Russian souvenirs are more a comment on the culture and the nostalgia for the past than useful gifts.

Irony is the new way to say you care.

Nowadays, even the ubiquitous matryoshka nesting dolls offer brief history lessons with one leader inside another. Soviet-era posters, caviar tin clocks and old canteen signs add to the usual fare.

Nostalgia is apparent in specialist boutiques like Buro Nakhodok (“Lost and Found”) and Ministerstvo Padarkov (“Ministry of Presents”). Toys and household items from bygone eras reappear as jewelry, lamps or notebooks. Shot glasses are filled from miniature Soviet petrol pumps. Perhaps the most popular retro gift is the Soviet-era propaganda poster, bought individually or as a set. Collections are designed around conceptual or aesthetic themes like space, travel or Constructivism.

Kirill Kalinin has sold a large number of Soviet posters at this year’s Christmas fairs, and has collected thousands of original Soviet posters over the past twelve years.

“For years these posters were not seen as valuable and were recycled or used as wrapping paper,” Kalinin said. He calls his posters an “underappreciated part of the art scene.” Sotheby’s Auction House recently sold a poster for $56,000, a nice gesture for a minigarch mistress.

Not all the popular gifts are emblems of Soviet Russia; symbols of New Russian capitalism are popular too. The Buro Nakhodok chain has shiny slippers with Audi or Porsche logos. The Konfael Company makes oligarch-friendly chocolate yachts and BMWs, as well as Snow Queens, Nutcrackers and chocolate postcards of St. Basil’s Cathedral. And when they say chocolate money, they don’t mean foil-wrapped coins, but hundred-dollar bills you can eat. Konfael is a relative newcomer on the Russian chocolate scene.

Old favorites like Red October brand chocolates are still going strong, with their ultra sweet dark confections, wrapped in images from the State Tretyakov Gallery collection. This year’s offerings hark back to the factory’s 19th-century origins, even though the Moscow factory itself has recently moved to new out-of-town premises.

Konfael, by contrast, is a 21st-century company, established in 2001. VIP gifts are a specialty, from 50-plus pound edible hippos to chocolate family portraits. Now there’s a unique gift; mom and dad for the eating, chased with vodka from a petrol pump.

Traditional, wall-size family and individual portraits are also having a resurgence, from the fantasies painted for the oligarchs (by the likes of Nikolas Safronov) to the fireside smiles depicted by struggling art students, of which there are many.

Lomonosov Porcelain, founded in St. Petersburg in 1755, has also wised up to the profit-potential of both tradition and customization. The Imperial Porcelain Factory still produces trademark designs like cobalt net. They have also introduced a colorful “Russian-style” series with fairy tale motifs. One can also order monogrammed porcelain to fit your personality and status in society. For the more frugal customer, chunky Gzhel figurines, from the clay-rich villages of the Gzhelka valley near Moscow, start at under a dollar. This year the stalls are flooded with what look like blue-and-white striped pottery cats, to celebrate 2010’s status as the “Year of the Tiger.”

Sturgeon, star-topped Kremlin towers, imperial crowns, double-headed Romanov eagles and busts of Peter the Great are among the novelty bottles for sale in the Kristall vodka factory shop in the eastern suburbs of Moscow. For many drinkers, vodka is vodka, so the kitschier the bottle the better. Kristall distillery is the largest vodka producer in Russia. Its time-honored brands include Staraya Moskva (“Old Moscow”) and Stolichnaya (“Capital”).

Felt boots called “Valenki” have been around for hundreds of years. After a long hiatus, the cozy boots are in fashion again. Traditionally worn by farmers and factory workers, their warmth is legendary, and variations on the theme can be seen on urbanites in Moscow. Valenki can be embroidered, painted or trimmed with fur. The Gorizont Company creates the boots as well as felt hats, including some great, playful sauna hats for the Russian banya, though friends at the American spa may look aghast. Pavlovsky Posad shawls are another age-old product that is making a comeback. Russian fashion designer Slava Zaitsev used the bright floral prints in his creations as early as the 1960s. The carrier bag from the factory shop features stylish girls wearing the shawls around their waists. But it’s still hard to put one on without feeling like a babushka.