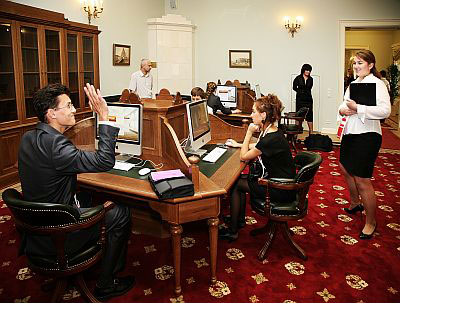 Named after the Russian Federation's first president Boris Yeltsin – an idea proposed after his death two years ago - the archive gives access to materials from leading national libraries. Unique documents, including orders from Peter the Great and the czars’ correspondence with European royalty, will be available for the first time to the general public.
Prior to the inauguration of the Boris Yeltsin Presidential Library earlier in 2009, the Russian Federation had two national libraries, or libraries specifically established by the government to serve as preeminent information repositories. The National Library of Russia in St. Petersburg was established in 1795 and the Russian State Library in Moscow, one of the world's largest libraries, was established in 1862. The libraries have been partially digitalized but the new Yelstin library is designed to stand apart from the rest.

“They’re overseen by the Ministry of Culture, while we report directly to the President’s Administration,” explained Yeltsin Library Director Alexander Verschinin.

It is planned that everyone will be able to partially access the archive over the internet. The Yeltsin library's website is still under construction and the exact date when it will be launched hasn’t yet been announced, but already 18 of its collections are accessible on the Internet, including the history of the orthodox church, the Russian army and the history of education in Russia.

“The Presidential Library must receive a hard copy of every document that is digitized,” added Vershinin. “Our resources are focused on the history, theory and practice of Russian statehood and the use of Russian as an official language,” he said.

The ambitious project is estimated to have cost $5 million for the equipment, IT infrastructure, and digitalizing process. A single reading room houses 64 seats for accesing the library’s resources. The multimedia hall is equipped with an ultra-modern conference system, allowing readers to connect to the system. In the center, an interactive display has been installed. The library’s showroom contains the original of the Russian constitution.

In addition to the Russian materials, the new library will be connected to the world digital library, a project launched in April 2009 by the U.S. Library of Congress, UNESCO, Internet search engine Google (the largest private sector backer), and 32 partner institutions. The WDL gives free public access to unique cultural materials from libraries and archives from around the world, including manuscripts, maps, rare books, photographs, films and sound recordings.

“The Presidential Library doesn’t have its own archive of paper documents. This entails close cooperation with other organizations, including international ones,” said Verschinin.

Russian President Dmitry Medvedev took part in the opening ceremony and was presented with library pass No.1. He stressed that it was ordinary citizens rather than the country’s leaders that should benefit from the library’s design.

He urged staff to make sure there were no technical glitches on launch day that would prevent users from accessing the material online.

When visiting a reference room to use the electronic archive, the Russian leader was not satisfied with how it worked. He successfully logged into the system and typed “Constitution” in the search bar. “It takes so long to load it! The files are too heavy,” the President said when he clicked to open one of the documents.

The Presidential Library will link the country's library system through a network of branches in all the regions of Russia, with the idea that its archive will be available via the Internet to every town and village in the country, every school and home. In 2007, then-President Vladimir Putin's decree for the Presidential Library mandated that branches are to be built in every of Russia's 83 federal regions.

“The crisis forced us to make changes to our regional plans. We now hope to launch them around 2010-11. We can also count on informational technologies helping with access to our resources. Thus far, Tyumen is our pilot project for setting up branches across Russia,” added Verschinin

The Presidential Library’s press service commented that, in addition to Tyumen, agreements for new locations had already been signed with the regions of Buryatia, Chuvashia, Omsk and Tatarstan.

The very first collaborative international digital library project launched by the U.S. Library of Congress, under James Billington's leadership, was the Meeting of Frontiers project with Russia in 1999. Collections from both the U.S. and Russia were digitized and juxtaposed to show parallels in the countries' history of frontier expansion.

“Many of our technological issues were resolved through consultations with American specialists and companies that provided equipment,” explained Verschinin. “The next step in our cooperation foresees new forms of informational exchange and access to each other’s resources,” he said.

The library is located in St. Petersburg’s 18th century Synod building. The institution of Synod was introduced by Tsar Peter the Great in 1721. It not only united the church leaders, but also was engaged in education issues.

The foundations of today’s building were laid down in 1830 and it was finished in 1834. The interiors of the Synod Church – Orthodox Patriarch’s former residence – were looted after the Bolshevik revolution. They were restored recently. For years the church was used as one of the halls to store the historical archive. Three years ago, 220 kilometres of shelves of priceless historic documents were moved to a new storage facility. Now these archives have been scanned and will soon be available for the digital library users across the world.

On the eve of the opening, Boris Yeltsin’s widow, Naina Yeltsina, visited the new library and expressed admiration for the project.

“One feels a link between centuries as one wanders around the library hall, admiring historical creations that became all the more unique because they were returned after they were taken away from Russia centuries ago. History and people are very close here,” Yeltsina said.

This article was partially based on materials from Russia Today.